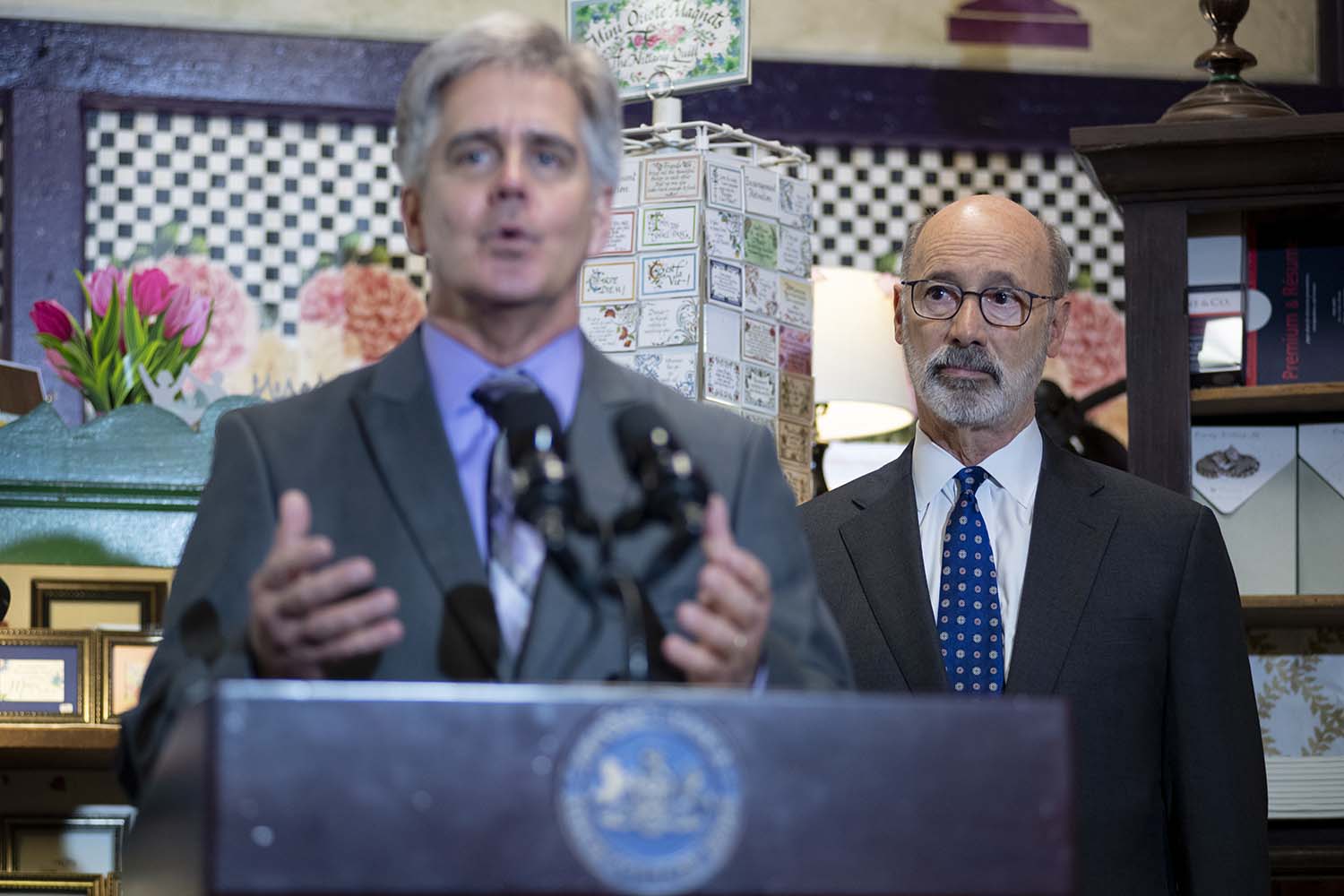 Above photo: PENNSYLVANIA GOVERNOR TOM WOLF, right, listens to Pennsylvania General Assembly Member Scott Conklin as he addresses a crowd during an event at the Nittany Quill on Wednesday, April 6, 2022, in State College, Pa. (Noah Riffe/Centre Daily Times via AP)

By Mark Scolforo
ASSOCIATED PRESS
HARRISBURG, Pa. — Proposals to hold Pennsylvania’s presidential primaries in March rather than April and to permit poll watchers to operate outside the counties where they live were advanced Wednesday by a divided House State Government Committee.

Both bills had already passed the state Senate and were approved for consideration by the full House.

The state’s primary during presidential election years would be moved from the fourth Tuesday in April to the third Tuesday in March. Supporters say the change would position the state to have more of an impact on the parties’ choice of presidential candidates.

The vote was 16-8, with two Democrats joining all Republicans in favor.

Grove and the committee’s ranking Democrat, Rep. Scott Conklin of Centre County, both said the bill may need to be altered so that the period of signature gathering does not start around Christmas.

The third Tuesday in March is expected to also be the 2024 presidential primary day in Arizona, Florida, and Illinois. In 2020, Pennsylvania’s primary was the same day as votes in New York, Connecticut, Rhode Island, Maryland, and Delaware.

The poll watchers’ bill, sponsored by the current GOP gubernatorial nominee, Sen. Doug Mastriano of Franklin County, would give candidates the right to have an additional observer and post them inside, close enough to see any canvassing and precanvassing.

“There’s no reason to have poll watchers if they aren’t able to be in the line of sight and clearly see what’s happening,” said Republican Rep. Paul Schemel of Franklin County. Rep. Eric Nelson (R-Westmoreland) called the bill “a clear opportunity to allow voters to have enhanced confidence and belief that we’re achieving election integrity.”

But Rep. Joe Webster, (D-Montgomery) called the proposal “an atrocity of a bill” that feeds mistaken suspicion and distrust of the state’s elections.

“What is really happening around bills like this is we’re intimidating enough poll workers that they’re not going to be there,” Webster said.

Conklin warned the bill was “looking for trouble” and could require additional law enforcement monitoring at all voting precincts.

Grove said that although the bill would allow candidates three poll watchers at voting places, in reality “you’re lucky to get one.”

“What this bill does is allow for the checks and balances provisions within our elections that stem back to 1937 to continue,” updated for modern needs, Grove said. The party-lines vote to advance the measure was 14-10.