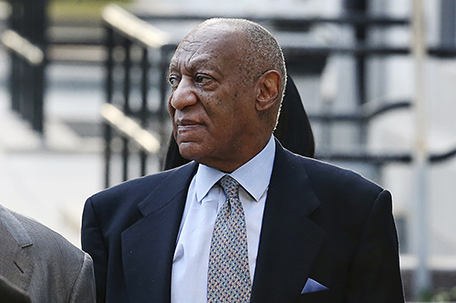 PHILADELPHIA –A day after Hollywood’s first Oscars of the #MeToo era, Bill Cosby is going to court on Monday to stop some of his dozens of accusers from testifying at his April 2 sexual assault retrial.

Cosby’s retooled defense team, led by former Michael Jackson lawyer Tom Mesereau, is due to clash with prosecutors over the potential witnesses at a pretrial hearing.

Prosecutors raised the prospect of calling as many as 19 women to the witness stand, including model Janice Dickinson, in an attempt to show that an alleged 2004 assault that led to Cosby’s only criminal charges was actually part of a five-decade pattern of him drugging and harming women.

Jurors did not have that context when they ended Cosby’s first trial last year in a deadlock. A judge allowed just one other accuser’s testimony but barred any mention of about 60 others who have come forward to accuse Cosby in recent years.

The only other hints jurors got of Cosby’s past came from deposition excerpts from 2005 and 2006 in which he admitted getting quaaludes to give to women he wanted to have sex with.

Cosby’s lawyers are urging the same judge, Steven O’Neill, to again limit the number of accusers allowed to testify. They argue that some of the women’s allegations date to the 1960s and are “virtually impossible to defend against.”

Cosby’s lawyers argue that the other accusers’ accusations are largely unsubstantiated and are not enough to meet the strict legal standard for allowing prosecutors to present evidence of a defendant’s prior bad conduct.

They said they would seek to delay the retrial if any of the women were allowed to testify so they could have more time to investigate their claims.

Monday’s hearing comes just 10 days after Cosby’s 44-year-old daughter, Ensa, died of kidney disease. His lawyers have given no indication they would seek to delay the hearing or his retrial.

In January, the 80-year-old Cosby emerged from a long period of near-seclusion to have dinner with friends at a restaurant and give his first comedy performance in more than two years. Legal experts said the nights on the town appeared to be an effort to rebuild his good-guy image.

Prosecutors are counting on other accusers testifying to show there was a sinister flip side to Cosby’s public persona as “America’s Dad,” cultivated through his role as an affable Jell-O pitchman and the star of the top-rated 1980s family sitcom “The Cosby Show.”

Cosby has pleaded not guilty to charges he drugged and molested former Temple University women’s basketball official Andrea Constand at his suburban Philadelphia home. He remains free on bail.

Prosecutors wanted as many as 13 women to testify at the first trial, but O’Neill allowed only Kelly Johnson, who worked for Cosby’s agent, to take the stand.

Johnson testified that Cosby knocked her out with a pill during a 1996 meeting at the Bel-Air Hotel. She said she woke up to find her dress disheveled, her breasts exposed and Cosby forcing her to touch his genitals.

The Associated Press does not typically identify people who say they are victims of sexual assault unless they grant permission, which Constand, Johnson and Dickinson have done.