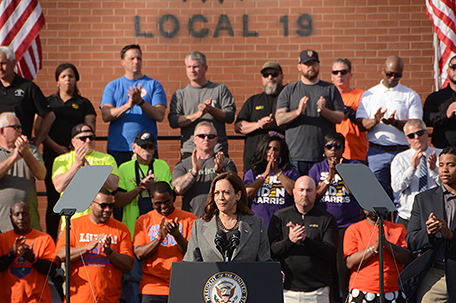 One of the things that unions have traditionally done in workplaces is demand the kinds of workplace safety and health protocols that employers in a post-COVID-19 era are finding important for financial and moral reasons.

On Tuesday, about 500 people came to the Sheet Metal Workers Local 19 Training Center in South Philadelphia to hear Vice President Kamala Harris and Labor Secretary Marty Walsh to talk with local labor leaders and to reinforce the Biden Administration’s commitment to workers and their safety.

Harris and Walsh lead the White House Task Force on Worker Organizing and Empowerment and have proposed about 70 actions that the executive branch could take to protect and expand the rights of workers to organize and collectively bargain to President Joe Biden, a longtime champion of unions. He has expressed support for these moves.

Each of the event’s speakers spoke about the continued importance of unions, and their relevance in the 21st century.

Walsh served as the head of the Boston Building Trades before becoming the city’s mayor. Unions have been at the center of his life since childhood, he said.

Walsh appreciates the president and vice president’s historic commitment to labor. One of the Administration’s crown jewels is the infrastructure bill that Congress passed earlier this year, creating thousands of new jobs, many of them union positions.

Extreme heat, both indoors and outdoors, was one of the topics Harris and Walsh discussed when they were in town.

“People don’t realize that what is 105 degrees out this beautiful people at the beach,” Walsh said. “There’s somebody on a roof, doing a roof here in the city, and they don’t understand that there’s somebody in a farm somewhere picking the fruit that we eat, and [that] there are people in warehouse all across America that are living in these conditions, even though it’s a beautiful day.”

According to statistics gathered by the Occupational Safety and Health Administration (OSHA) at the Department of Labor, every year over 3,500 workers get sick or worse due to heat hazards, and those are just cases that get reported, he added.

As summer approaches, it is important to bear in mind that for the last eight years, they have been the hottest on record. Many of the new jobs created by the Bipartisan Infrastructure Law will require workers to work outdoors in this record-breaking heat, building bridges, replacing lead pipes, and laying broadband wire, Harris said.

Indoor jobs, such as those in steel mills and on factory floors where temperatures can climb high enough to cause heatstroke, she added.

“That danger is only increasing, because as we know, climate change has become a climate crisis.  By 2030, this very city (Philadelphia) can expect 25 days a year with heat and humidity that will make it feel like 105 degrees or hotter,” she said.  “Think about that.”

During her remarks, the vice president announced that OSHA is launching a new National Emphasis Program (NEP) on Outdoor and Indoor Heat Related Hazards in order to address these issues.

As part of the NEP, OSHA establishes heat inspection goals and aligns the threshold for initiating inspections when the National Weather Service issues a heat warning or advisory. OSHA inspectors will be directed to look for heat-related hazards during all inspections on days when the heat index is 80° or higher, regardless of whether the industry is one of the over 70 high-risk industries targeted by the heat NEP.

The unseasonably warm weather surrounding the event, which was held outside, appeared to underscore the vice president’s point about the need to address climate change. The announcement is timely, said U.S. Rep. Mary Gay Scanlon (D-5th Dist.).

“It’s something we know needs to happen, and I think we all prefer that we get legislation that does this,” Scanlon told the SUN. “But if we cannot persuade the Republicans to do the right thing for the people, then we’ll use executive orders where we can.”

Scanlon also praised the current administration’s commitment to Philadelphia and its workers. Walsh has been a critical player in this, visiting the city at least four or five times, she said.

“He speaks the language and knows how to get things done, so I think we’re in a good place,” she said.