Biden campaign kicks off in Philadelphia 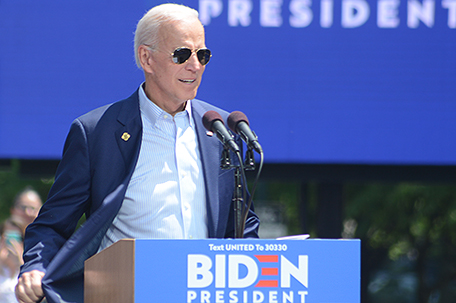 With the iconic Philadelphia City Hall building as backdrop, the locally popular former senator and VP lit a fire under an enthusiastic crowd at Eakins Oval.

As former Vice President Joe Biden’s native Pennsylvanian roots and respected leadership in the region are well known, it makes sense that former campaign has decided to set up their main headquarters here.

It is not only friendly politically, but is strategically positioned to take full advantage of undecided independents and disaffected Trump voters in the Philadelphia suburbs, which also made this city a good choice for the official campaign kick-off event.

Throughout his career — missteps and gaffs notwithstanding — Biden has been consistent when it comes to his ability to bring about bipartisan unity on many fronts.

It was in this spirit that he addressed hundreds of people on Saturday, May 18 as he officially kicked off his campaign in the brilliant sunshine and seasonably warm temperatures.

He is also respected around the world — and has generally enjoyed African American support for decades — in spite of his infamous performance during the Clarence Thomas confirmation hearings and being the author of the Violent Crime Control and Law Enforcement Act of 1994, legislation that has devastated communities for decades, so he is by no means a shoo-in for 2020.

Bearing all of these factors in mind, Symone Sanders — a senior campaign official with the Biden campaign — said that the candidate will not take the support of Black voters for granted, and is well aware of some of the conversations and prognostications about the candidate that are swirling around, and about how many of them are totally surprised to discover the extent of his pre- Obama era affiliations.

“I think those people that are surprised that Vice President Biden enjoys long standing relationships with the African American community are surprised because they’re doing their politics on Twitter and not talking to real people,” Sanders told the SUN prior to the rally. “Vice President Biden has a long standing relationship with the African American community. He has been in public life for a really long time, but he has been a good partner. But we also know that it doesn’t mean that Black people are just going to vote for [him]. We know that this is going to be a fight, and we look forward to taking our message to every single corner, space and place in America to earn the support of folks in this primary, Black voters especially.”

Biden broke ranks with the majority of the other candidates during his remarks by not only openly criticizing President Trump by name, but did so on numerous occasions to drive his unity message forward.

“If the American people want a president to add to our division, to lead with a clenched fist, closed hand and a hard heart, to demonize the opponents and spew hatred – they don’t need me. They already have a president who does just that,” he said. “ I am running to offer our country – Democrats, Republicans and Independents – a different path.”

Biden touched upon some key issues he wants to address and Obama era policies he would like to continue or improve upon, such as the Affordable Care Act and the Recovery Act, both under attack by the current administration.

“We know what works and we know what we have to do,” he said. “So let’s stop fighting and start fixing.”

Some of Biden’s solutions include giving people the right to choose a public option like Medicare. He also spoke of adopting a 21st century strategy when it comes to the educational, economic, environmental and infrastructure challenges we face.

“Focusing on the future is the only way we’re going to be able to build a green infrastructure,” Biden said. “Not only new and safer roads and bridges, but greener highways, ports, and airports. New water systems – so no one in this country is drinking poisoned water. There’s no question we need a new electric grid that protects this nation from cyber attacks.”

He spoke about the role of capitalizing on the expanding green energy market –  a “clean energy revolution” –  as part of that solution.

He told the crowd that no matter how many great ideas and policy changes are floated about out there — including those tackling climate change — none of it is possible to achieve under the current leadership.

“Everyone knows who Donald Trump is,” Biden said as he concluded his remarks. “We have to let them know who we are. We choose hope over fear. Truth over lies. And yes – unity over division.

It’s time for us to lift up our heads and our hearts and remember who we are. We are the United States of America. One America. And there’s not a single thing we can’t do, if we do it together.”