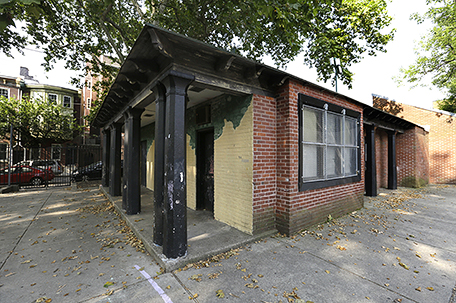 ABOVE PHOTO: In this Tuesday, July 3, 2018 photo, the community center at Weccacoe Playground in the Queen Village neighborhood of Philadelphia stands closed. The area beneath the popular playground is a historic African-American church’s burial ground, which holds the remains of more than 5,000 black Philadelphians City officials, neighbors and activists have focused on how to honor those interred while not losing the public park. The city announced plans to develop a section of the playground, demolishing the center to make room for the memorial. (AP Photo/Jacqueline Larma)

PHILADELPHIA – The City of Philadelphia’s Office of Arts, Culture, and the Creative Economy (OACCE) and the Bethel Burying Ground Historic Site Memorial Committee (Committee) are pleased to announce the selection and approval of the Bethel Burying Ground Memorial design entitled “Her Luxuriant Soil” by Karyn Olivier. Oliver is a Philadelphia-based artist who creates sculptures, installations, and public art. Her work often intersects and collapses multiple histories and memories with present-day narratives.

“The Commissioners found the memorial design by Karyn Olivier to be deep, beautiful, and complex,” said Alan Greenberger, chair of the commission. “We are excited about the memorable experience the space will offer visitors.”

“Karyn’s proposal is not only a memorialization of our past, but it also communicates what we value as a city,” said Mayor Jim Kenney. “When they view “Her Luxuriant Soil,” the people who live in the Queen Village neighborhood and the visitors who come to see this memorial will understand that the City of Philadelphia truly values the diversity of our history and the contributions of African Americans.”

The memorial will recognize and celebrate the over 5,000 African Americans buried at the historic Bethel Burying Ground located in Weccacoe Playground in Queen Village. The Bethel Burying Ground Memorial Project budget is $1,150,000, which includes the removal of the existing recreation center building by hand and the replacement of the current tennis court.

White granite and concrete pavers will cover the surface of the cemetery footprint, engraved with inscriptions of the biographies of those interred based on the extensive research of historian Terry Buckalew. Several of the pavers will be treated with a special coating that allows the inscriptions to become visible only in humid or wet weather. Several pavers will remain blank, representing the interred who have not been identified and whose stories have not yet been brought to light. A continuous, flowing brick pathway will delineate the total footprint of the cemetery. The pathway will extend beyond the western fence line, acknowledging the existence of the cemetery grounds beyond the playground site. Beyond a walkway, the brick pathway will also serve as a wall as a buffer between the memorial and the tennis court, as well as a bench that will include a granite “headstone” inscribed with Bethel Burying Ground. Two granite inserts in the wall will be inscribed – one with a quote from Richard Allen, the founder of Mother Bethel AME Church which purchased the land to establish the Bethel Burying Ground cemetery in 1810, and one that presents the words inscribed on the sole headstone removed from the site during the archeological investigation that confirmed the existence of the burying ground.

Throughout the memorial, decorative planters in the form of cradle graves will beautify the park and echo the landscape of 19th-century cemeteries. This element will offer the opportunity for community engagement and ceremony, allowing residents and visitors to plant and maintain the decorative vessels, as is the tradition with 19th-century cradle graves.

“Through this memorial, I hope to create a restorative, regenerative, educational, and beautiful space that allows descendants, neighbors, Philadelphians and visitors to contemplate and honor those buried here,” Olivier said. “My hope is that it will extend an acknowledgment of the profundity, challenge, and resilience of the lives of the African Americans who resided in the surrounding streets. With this work, I aim to tether commemoration to healing and the ephemeral to the enduring — an intentional navigation between two sites, two spaces: an early 19th century Black cemetery and a present-day playground.”

“The community has been involved in the development of this memorial since the existence of the Bethel Burying Ground was brought to light in 2010,” said Councilmember Mark Squilla. “I believe this memorial will add great value to the neighborhood where Philadelphians of all ages can visit, learn and benefit from the stories it will tell.”

The Committee also acknowledges the contribution of Terry Buckalew, a former Committee member and an integral part of the project. In 2010, Terry brought the existence and history of Bethel Burying Ground to the attention of the City. His ongoing research sheds light on the lives of those buried there.

In June 2018, the city officially announced plans to develop the site-specific public art memorial. A series of four preliminary community engagement sessions were held in November 2018 to gather public input on the emotions, reactions, and stories the public art memorial should invoke. In October 2019, a meeting was held for artists and design professionals to connect to develop a collaborative approach to respond to this public art opportunity.

A national Request for Qualifications and a Call to Artists was issued in November 2019. Twenty artist teams applied. The city and the Committee selected five semi-finalist artist teams in January 2020 to create design concepts. Four of those artist teams submitted proposals. The semi-finalist lead artists representing the four teams were Muhsana Ali, Shawn Theodore Jackson, Karyn Olivier, and Sara Zewde.

The city and the Committee hosted a series of four community engagement sessions and invited Philadelphians to provide input on these design concepts through an online input form from January 14-February 5, 2021. The input forms received 1,087 submissions and ranked each of the four artist team proposals by how well each met eight criteria – goal, history, engagement, learning, audience, setting, appearance, and concept.

The feedback from these community engagement sessions and the online input forms were summarized and provided to the Committee for consideration in the final selection process. At a committee meeting in February 2021, each of the four artist teams presented their memorial design to the Committee. The Committee then deliberated and selected Karyn Olivier’s proposal as the winning Bethel Burying Ground Memorial design.

“The city thanks the many members of the community who advocated for the Bethel Burying Ground Memorial and participated in the community engagement process to select the winning design by Karyn Olivier,” said City Managing Director Tumar Alexander. “Thanks to your input and dedication, this public art memorial will pay respect to those laid to rest at this historic site and the stories they represent.”