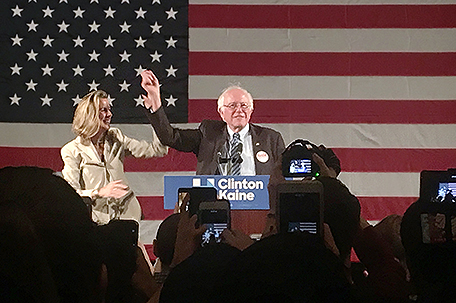 Former Presidential candidate Bernie Sanders addressed a large crowd in Center City October 8th on behalf of PA Democratic candidate for the US Senate, Katie McGinty, and Democratic Presidential nominee Hillary Clinton. Also on hand was the Democratic nominee for State Representative of Pennsylvania’s 200th Legislative District, Chris Rabb. Rabb is the only Pennsylvanian candidate officially endorsed by Our Revolution, the grassroots political nonprofit run by Senator Sanders and his wife Jane, established to keep the momentum and civic engagement inspired by his campaign going.

When it comes to the 2016 presidential election, Philadelphia and its suburbs have become the jewel in the crown. As a result, campaign surrogates and the candidates themselves have made numerous appearances at rallies and storefront headquarters on almost a daily basis in the region.

Chris Rabb, a former Temple University professor and newcomer to the political stage who won the primary election by only seven points for a seat which was uncontested for over 30 years, spoke about running in an established political arena.

“My district, my home—the People’s Republic of Mt.Airy, represents the bluest dot in the most formidable swing state this insane election cycle. It’s a big deal for me to be here today, because a year ago, nobody knew who I was in the political game established here in Philly because I am an outsider,” Rabb said.

He went on to speak about being an unapologetically progressive candidate who despite knowing the odds he was up against, was not easily intimidated when people tried to discourage him from running.

“If people tried to talk Bernie out of running, where would we be? This is no accident; I’m here for a reason. “I’m here for a higher purpose.” said Rabb.

He explained that over 150 years ago, his great, great, great grandfather, Rev. Ansel Freeman, a radical, evangelical minister, abolitionist, and agent on the Underground Railroad worked for justice just blocks away from where he will be the next state representative. There are five generations of social justice advocates in his family.He reminded the crowd of the great influence of social movement on public policy.

“Voting is just the beginning. So we know what we need to do on November 8th. We know this. But guess what?  The real work begins on November 9th,” said Rabb.

Katie McGinty began her remarks with a reaction to the release of a taped conversation between broadcaster Billy Bush and Donald Trump in which Trump sexually objectified the woman they were meeting that day and boasted of past sexual assaults.

“As a woman, I am appalled,” said McGinty. “But the Northeast Philly girl is coming out of me, and I’m gonna fight, because as the mom of three teenage daughters, we will defeat the disgrace[that is] Donald Trump…what Donald Trump was up to was no locker room stuff, it was no potty talk. Donald Trump confessed to — and celebrated — sexually assaulting women.”

McGinty also highlighted recent revelations about her opponent, Senator Pat Toomey (R-PA). Toomey is one of the several lawmakers who have not endorsed Donald Trump. She doubled down on the latest reports about Toomey’s conflict of interest when he was on the Senate Banking Committee. While Toomey was working to water down banking reforms in Washington, he held up to $1 million in shares of Team Capital Bank.

A Politico report states “The bank also used a controversial foreclosure method called a “confession of judgment” to foreclose on at least 21 homes in the state that were used as collateral by small business owners, even as Toomey fought against consumer protections for mortgages in the Senate, repeatedly opposing the Consumer Financial Protection Bureau.”

“Pat Toomey’s bank engages in behavior so bad that it is considered predatory,” McGinty said. “Foreclosure [practice] that is so bad that it is illegal in 35 states.  Our senator Pat Toomey’s own bank has been engaging in predatory foreclosures — against his own constituents. Pat Toomey took people’s homes – it’s time for us to take his job,” she said as the crowd roared in agreement.

Senator Sanders began his remarks with an “approach to politics in a way media often does not.”

“I’m an old-fashioned guy, and I believe in democracy. And I fear— very much— that if current trends continue, we are going to lose our democracy and more to an oligarchic form of society,” Sanders said

Touching upon an issue paramount to him, Senator Sanders highlighted his concerns about climate change and how it affects the world. He cited how the strain on natural resources—a direct result – increases global conflict as people battle over those dwindling resources, and cannot be ignored or pilloried by climate change deniers like  Republican Presidental nominee Donald Trump.

He highlighted the homogeneity and bigotry of the Trump campaign as a significant threat to a country built on diversity.

“Brave and courageous people put their lives on the line for our rights,” Sanders said. “ Our diversity is what makes us a great country. We cannot elect a president that has made bigotry the cornerstone of his campaign.”

After emphasizing the need to register to vote and be engaged in helping to get people to their polling places on November 8th, Sanders asked the crowd to continue the momentum going forward. “We need your help the day after the election…our job is to transform our country,” he said.

As he outlined Democratic Presidential nominee Hillary Clinton’s plan to for free and affordable state college tuition and loan refinancing, Sanders touched upon the incredible burden that student debt currently poses to graduates and their families. He stopped and asked the crowd how many were currently struggling with this debt and what interest rates they had.

This resonated with  Philadelphia City employee and single parent Marlene Anderson, who responded loudly, “Thirteen[percent]! I’m a single parent! I’m’ paying [13 percent interest] on $53,000.00, and I only have one child!” Sanders asked if it was a Parents Plus loan, to which Anderson responded yes. He then asked the crowd that if you can get a loan for a car loan at one or two percent interest, and refinance a house at three or four percent, then why is the student debt interest rate exponentially higher?

After the rally, Anderson explained her situation. Her son, Christopher Stokes, 23, graduated from East Stroudsburg University — located in northeastern Pennsylvania — in 2015. Although Stokes was fortunate enough to find work right away, and Anderson has a modest yet decent salary, the original debt repayment terms posed a great hardship for both of them.

The Parents Plus loan terms had Anderson scheduled to pay $600.00 per month for the first seven years, causing a tremendous strain upon her budget. She and her son worked with the system for better repayment terms, which go into effect this fall. The terms were extended for ten years. Her son also has to repay $29,000.00 on his personal loan. A Clinton supporter, she was very impressed by what Sanders spoke about, even though she was not a supporter during the primary season.

“I did agree with much  Sanders during the primary season, and although it is too late for us[herself and Christopher]I’m thankful for [the proposal] regarding free education for other people,” Anderson said.