The Bern Comes To Philadelphia 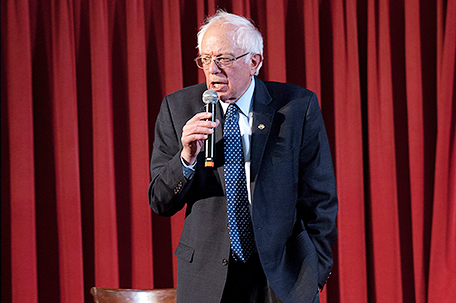 Democratic Presidential candidate Sen. Bernie Sanders came to Tindley Temple United  Methodist Church to share his vision for the country with a community he needs to connect with.

As she sat in a pew at the Tindley Temple United Methodist Church in South Philadelphia waiting for the Community Conversation With Bernie Sanders to begin, Carter, of Ardmore, wanted to do what many partisans of the Democratic Presidential candidate advise naysayers to do: her research.

“I need to hear what he has to say,” said Carter, a member of the American Federation of Governmental Employees, Local 2006, said. “I need to know what his social and economic policy agenda is for the Black community. Since I had never heard about him until he decided to run for president, I need to know more about him.”

In contrast, Susan Walker of the city’s Fern Rock section had no questions regarding Sanders at all.

“I’m tired of status quo politics,” she said. “I want to see change. Bernie speaks to everything I’ve been talking about.”

Whether they were there to question or to receive affirmation of their choice, about 100 people came to Tindley Temple to see the senator from Vermont speak in a modified town hall event.

In addition to being interviewed by the Rev. Robert Johnson of Tindley Temple, Sanders took questions from the audience on matters ranging from mass incarceration to reparations to the Black community for slavery.

The conversation, which was put together within a 24-hour period, was designed to allow the community’s voice to be heard in a way that it couldn’t at a larger rally like the one Sanders held at Temple University’s Liacouras Center later that evening, said Sulaiman Rahman of Black Voters Matter, which organized the event with Tindley Temple, the Urban Philly Professional Network, Uniquely You Inc., and the Pennsylvania Democratic Black Caucus.

“We wanted to create a more intimate environment that would allow the African American community to ask questions,” Rahman said.

Before taking questions from the Rev. Johnson, Sanders gave an opening statement that talked about why he intends to stay in the Democratic Presidential race until he can’t anymore.

“What we are trying to do with this campaign is make a point,” Sanders said. “We have a lot of problems in this country and we’re not going to solve them using the same old methods. We need a revolution. We have to say “Enough is Enough!”

Sanders shared his vision for America, a vision that includes putting the nation’s money toward things like job creation through infrastructure repairs, free college education, and single-payer health care.

During his interview with Rev. Johnson, Sanders was asked about ways to help Philadelphia’s Black community do better economically. Citing high rates of unemployment among Black youth as a reason, Sanders said that it might be time for the federal government to do better by Black owned businesses.

One of the first audience questions concerned reparations and how it might provide the same kind of positive economic impact it’s had for other communities that have received it.

In the past, Sanders has had problems addressing this topic head-on. While he still didn’t actually address it head-on at Tindley Temple, Sanders did say he’d do some of the kinds of things that reparations for the Black community might pay for.

“I think my view is pretty close to President [Barack] Obama’s, that is, we understand the legacy of slavery and it’s impact,” said Sanders, who has touted his support of the Civil Rights Movement and participation in the March on Washington. “We see outrageous levels of unemployment, inadequate education, inadequate health care…What we have got to do as a nation is invest in those communities who need that investment the most.”

One of the other things that we need to do is look at how the War on Drugs has impacted some of the economic challenges the Black community faces. Federal grants are impossible to get for people who have been convicted, as are student loans, public housing, and whole host of other things that are necessary to survive when one first gets out of prison.

“We have to do a lot more to address recidivism,” Sanders said. “People leave jail with no job training, no housing and no education. Families get broken up because of the public housing situation. We have to address that.”

Part of addressing that is looking at the classification of the drug that most of these people had on them when they got arrested: marijuana.

“We have to take a hard look at the War on Drugs,” he said. “Right now, in the last 30 years in this country, millions of people have criminal records due to possession of marijuana. When you have a criminal record, it’s hard to get a job. Right now, marijuana is a schedule one drug, like heroin. I think that’s dumb.”

Before the Senator got to Tindley Temple, the audience was treated to a performance from gospel artist Shirley Murdock.

The coalition is attempting to host Sanders opponent, former Secy. of State Hillary Clinton, for a similar event, Rahman said.