Being Kept In The LOOP 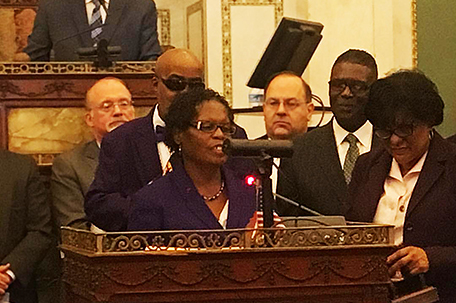 When Philadelphia City Council passed the Long Term Owner-Occupant Tax Relief Program, or LOOP, it was designed to give residents who had been in their homes for 10 years or longer relief from higher taxes brought on by the city’s Actual Value Initiative program.

The original program was supposed to end after 10 years.

During Thursday’s City Council meeting, the LOOP got a little bigger. Council passed an ordinance extending the time limit for LOOP and giving older city residents, especially those on low to moderate incomes, a sigh of relief.

Councilmen Kenyatta Johnson and Mark Squilla joined forces to introduce the bill, which extends the time limit of the LOOP program under certain terms and conditions.

For many of the people who came to Council to speak on behalf of the bill, people who represented elderly populations and low-to-moderate income families, passing the LOOP extension eased a lot of anxieties.

“[Homeowners] needed peace of mind,” said Walter Spencer, a resident impacted by the program. “They needed a guarantee that they could remain in their homes and they wouldn’t have that guarantee unless it was extended.”

Because Philadelphia remains a hot real estate market, it’s important that City Council continues to advocate for those residents for whom large tax increases would serve as de facto eviction notices, Councilman Johnson said. So efforts in that regard will continue, he said.

Council also passed an ordinance amending the “Green Roofs” tax exemption for businesses in hopes of getting more people to utilize it.

The exemption, which can be accessed by building owners, is designed to get building owners to use more ecologically friendly building materials, and tools for storm water management, Councilwoman Blondell Reynolds Brown said in an interview with 900AM WURD.

“Since we passed the ordinance, we’ve only has seven applications for it,” she said. “It’s an incentive.”

While the credit is limited to building owners now, there’s an effort being made to try and find a way to pass it on to individual homeowners, Reynolds Brown said.

Prior to the meeting, Council presented a resolution to Sarah Collins Rudolph, the lone survivor of the 1963 bombing of the 16th Street Baptist Church in Birmingham, Alabama.

Rudolph was in the basement of the church with her sister Addie Collins when the bomb exploded. She was permanently blinded in the attack, which was widely credited with alerting the nation to what was going on in the South during the Civil Rights Movement and eventually getting the Civil Rights Act of 1964 passed.

All 17 Council members presented the resolution to Rudolph.

The next Philadelphia City Council meeting is scheduled for March 31.

Homeownership in Philadelphia: On the Decline