Being Black (and wanting a cup of coffee) in Philly 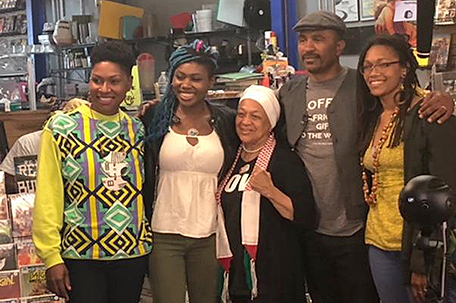 ….Or a lot of discussions about coffee shops, access, and who has the right to stay.

Every morning without fail, Americans make their way to kiosks, convenience stores, cafes, and if they’re lucky, their own kitchens to grab that first cup of coffee.

The smell of the brewing beverage can help make sense in a world that doesn’t always while the caffeine can help sleepy heads in search of a jolt get going so that they can start their day.

We don’t usually think about it much.

But this week, thanks to an incident at a Starbucks on Rittenhouse Square in April, Philadelphians were not only forced to think about coffee, but also think about what kind of coffee we drink, who sells it to us, and where we feel comfortable drinking it.

On Tuesday, all of the nation’s company-owned Starbucks locations closed their doors for a half-day training designed to address unconscious bias within its workforce, teach workers how to access it within themselves, and combat it.

It was an issue that reared its ugly head back in April when Rashon Nelson and Donte Robinson were arrested as they waited for a colleague at the Starbucks at 18th and Spruce in Rittenhouse Square. Manager Holly Hylton had called the police, accusing the men of loitering and refusing to leave.

It was part of a pattern of calling the police on people of color according to Philadelphia Police Department records. When Hylton took over the Rittenhouse Square store, the number of police calls for #StarbucksWhileBlack went from two in 2016 to 28 in 2017.

Starbucks founder Howard Schultz, company CEO Kevin Johnson and Rosalind Brewer, company COO came to town to try and put out the fire the arrest caused, a fire that included marches, threatened boycotts, and other forms of protest including sit-ins.

As the baristas at Starbucks took their unconscious bias training on Tuesday, a variety of events designed to look at issues ranging from the everyday microaggressions that people of color face on a daily basis to the economic opportunities available to Black coffee shop owners seeking to provide a safe space for coffee drinkers of color, took place here in Philadelphia.

It was two days worth of discussions, and I went to as many as I could because I was interested in hearing what was said.

What I found out was that the road to what happened at the Starbucks on Rittenhouse Square was a long one that we had all been traveling for years.

The question that the incident has forced us to ask is, who will be welcome here once we reach the end of that road?

The morning began with the #CoffeeWhileBlack Roundtable discussion at Amalgam Comics and Coffeehouse, 2578 Frankford Ave. (Please see SUN correspondent Kharisma McIlwaine’s story on the discussion itself.)

After the discussion, which was organized by Keba Armand Konte, founder of Oakland, California-based Red Bay Coffee, attendees were invited to take a tour of some of the city’s Black-owned coffee shops as a means of giving folks some alternatives to being in a space that might provide coffee, but not provide comfort.

One of the stops on the tour was Uncle Bobbie’s Coffee and Books, 5545 Germantown Avenue. SUN correspondent Amy V. Simmons picks it up from there:

Opening and operating a successful independent coffee shop/ bookstore in the 21st century is more than a notion.

There is the challenge of investing in this business model at a time when people are reading books on Kindle, large chains based upon similar models are closing and retailers like Amazon are dominating the landscape. Still, it is something that many embrace.

“I think people underestimate really what the independent bookstore is,” said Raphael Freeman, co-founder and chief of operations at Uncle Bobbie’s Books and Coffee in Germantown. “They believe that independent bookstores are dying in general, but that’s actually not the case…it’s not like Amazon doesn’t exist, but it’s about curating in a community, understanding the market that you really want to be in, and serving that market. We’re not everything; there’s loads of books that we won’t ever have. But in terms of building a space where community can share ideas, listen to each other’s conversations, butt in…that’s the best part.”

Another challenge — especially in economically distressed neighborhoods — is that the mere presence of a new neighborhood coffee shop is often a harbinger of gentrification, overdevelopment and systematic removal of the culture of the area. Rather than an improvement, the encroaching wave of change is viewed more as a soft coup.

This is one of many reasons these establishments are often not embraced or patronized by long-term residents. Uncle Bobbie’s sought to address these concerns head on and cultivate a Black space from the start, through a variety of means — from offering a wide range of reading material with topics that resonate with the community to simple nods to African-American tradition like including sweet potato pie on the menu.

Freeman also feels strongly about welcoming and educating those in the community who might want to learn more about coffee culture  — for instance, how to order the many specialty drinks with complicated Italian names — but might feel intimidated by it all. Add to that the perception that these places are exclusively for those newcomers who seem intent upon remaking that community into their own image, and the alienation increases.

“Many coffee places feel exclusive in a way they don’t need to be;” he said.

In the aftermath of the Starbucks incident, which took place in Center City earlier this spring, Freeman observed an uptick in traffic at Uncle Bobbie’s.

The curious new customers not only discovered a top-notch establishment with great coffee, food and books, but one that was genuinely committed to treating all of its patrons with kindness and respect. No hassles, cross-examinations or “othering” of any fashion that made them feel uncomfortable or singled out.

“I think the best thing, more than anything else, is that we got on people’s radar in a way that we weren’t necessarily on it before,” Freeman said.

Freeman at Uncle Bobbie’s brings up a topic that didn’t come up among officials and others: gentrification. At the heart of this discussion is the perception on the part of the Hylton and others like her that people of color are the “other” and thus don’t belong.

It was a topic that did come up in the next place I went to, MSNBC’s Everyday Racism In America Town Hall at the Prince Theater at Chestnut Street.

People from all walks of life came to see a discussion moderated by MSNBC’s Joy Ann Reid and Chris Hayes on the types of daily accommodation-related racism that people of color deal with every day.

Reid brought up the issue of gentrification and what part it might be playing in all this because many of the interactions between police and people of color have been in predominantly White spaces.

Wise believes that’s no coincidence. Because White comfort means more to those calling the police than what can sometimes happen when Blacks and police connect, the problem must be dealt with in a way in which Whites have confidence.

“The irony is,” Wise said, “the gentrifiers of today; their parents or grandparents ran away from the city to get away from Black and Brown folk. And now their children and grandchildren are saying ‘oh, the suburbs, there’s only so many Olive Gardens I can go to, so I need to go back to the city, and get my life in the city.’”

“But when I do that,” Wise continued, “I need to get my Hot Yoga Studio, my pottery studio and my stuff represented. And if you intrude on that, I will then call the police. This is all part of a larger problem that we can’t solve just in the prosecutors office. We have to look at it as a housing issue and an education issue and go from there.”

But will we? That’s the question.