beGirl.world and Uniquely You Summit partner to send Philadelphia girls to see “A Wrinkle In Time” 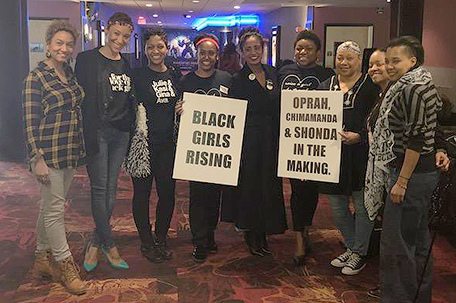 Last Saturday, the organizations beGirl.world (bGw) and Uniquely You Summit (UYS) partnered to send 300 girls to see Disney’s “A Wrinkle In Time” at the United Artists Riverview Stadium. After a successful GoFundMe campaign, the organizations sent groups of young ladies ranging from age 7 to 17 to the screening.

bGw was founded in 2014 by Deesha Dyer (President Obama’s former White House social secretary), Marcella Hudson and LaToya Stroman. The mission of this Philadelphia-based organizationis to uplift young girls through mentorship, exposing them to travel while encouraging growth, exploration and independence. bGw is structured as a two-year program and has already taken groups of young ladies to Paris and London, providing passports, language lessons and a variety of culinary experiences.

Shaleah Laché Sutton founded UYS in 2009 as a forum where Black girls between the ages of 11-18, could openly speak about what it is like to be a young Black girl in America. UYS’s mission is to help Black girls uniquely define, discover and become who they are. UYS uses their annual summit and a variety of platforms such as #Fortheloveofblackgirls and the #WhatIKnowNow celebrity panel series to do just that. Both organizations encourage young ladies to embrace who they are unapologetically. It was only fitting that these organizations combine their efforts to show what can happen when creativity, perseverance and Black girl magic collide. 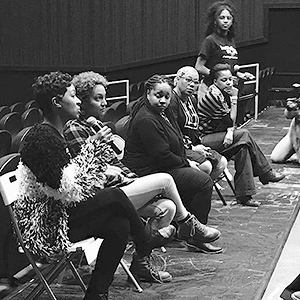 The path DuVernay has helped pave for creatives of color — and specifically for women of color in film — further supports the idea that representation truly does matter. That idea was reinforced during bGw and UYS’s Saturday screening, which featured a panel discussion with a dynamic group of ladies in the film industry.

The panelists included: Nuala Cabral, educator and award-winning filmmaker; Sannii Crespina-Flores, founder of PLUM-The Un-Inhibited Muse Festival and Do Remember Me; Tonya Jackson, Independent Media Maker, Owner of Life Happens Media Works, LLC and Youth Program Manager of Black Star Film Festival; Amira Smith, Director of Marketing and Multicultural Affairs for The Greater Philadelphia Film Office; and Janine Spruill, Founder and Executive Director of Lil Filmmakers Inc.  Each panelist shared their thoughts on the importance of seeing ourselves on the big screen, the importance of telling our own stories in whatever medium we choose, the importance of silencing self-doubt and the importance of staying true to oneself no matter what. Amira Smith offered these words to the young ladies.

“Everyone on the panel is here to help connect everyone who has a story to tell with the resources to tell their story.” Smith said,  “Everyone’s story is really important. We saw ‘A Wrinkle In Time’… science fiction like this was not out when I was a kid. I use to have a big problem because I was a huge sci-fi fan and I used to think, ‘so are there no black girls in the future?’ We’ve been here since the beginning of time, we will be here until the end of time. Why is that not being shown on the screen? So whatever story you have, whether it’s a family story or something that’s aspirational about what you want to do when you grow up or anything… it’s important because there’s someone who is similar to you who will hear it and connect with it.”

The words of the panelists resonated not only with the young ladies but also with the mothers who were accompanying their daughters. Young ladies approached the panelists to find out more about their work and parents openly spoke about their struggles with the idea of perfection both as parents and women. They shared the pressure they experienced and the sometimes impossibly high standards they set for their children in an effort to make them succeed. Open dialogue about the common areas where we all struggle as human beings is so necessary; bGw and UYS offered an awesome opportunity for the women at the screening of “A Wrinkle In Time” to experience that.

“A Wrinkle In Time” was incredible aesthetically, but even more powerful in terms of message. Everyone was reminded of the significance of positive affirmations, the importance of embracing the things that make each of us unique, to not allow fear to stand in the way of our greatness and to remove negative thinking at all costs. Representation matters, moments where we encourage one another matter, and our girls matter!

To find out how you can donate or become involved in beGirl.world and Uniquely You Summit visit http://www.begirlworld.com/ and http://www. uniquelyyousummit.org/.

“A Wrinkle In Time” is in theaters nationwide. Check your local listings for show times.