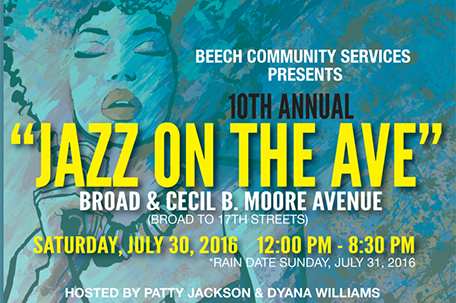 Music lovers in the Delaware Valley can enjoy a cornucopia of music on July 30, from noon to 8:30PM, at the 10th Annual “Jazz on the Ave” Music Festival. Sponsored by Beech Community Services, this free, family event features live musical performances from some of the region’s top jazz, R&B, gospel and reggae artists. Cecil B. Moore Avenue will be transformed from Broad to 17th Streets with two stages, a variety of vendors and a Kids Zone.

“Jazz on the Ave is one of our ways of giving back to the community,” explained Ken Scott, president of the Beech Companies. “Thousands attend this concert each year, not just because it’s a great family and community event, but because it’s an opportunity to celebrate the great musical history of Cecil B. Moore Avenue. Then named Columbia Avenue, and affectionately called the Golden Strip, the avenue was a famed destination for jazz entertainment during Philadelphia’s golden era of jazz from the 1940s through the early 1960s. We are continuing that tradition with our annual festival. This year’s festival promises to be the best ever with a powerful line-up of award-winning artists on the main stage.”

Grammy Award-winning singer/songwriter/multi-instrumentalist Tony Rich will step to the stage with a diverse musical style that mixes elements of jazz, rock and soul. In 1997, Rich won the Grammy for Best Male R&B Album for his solo debut “Words.” The award-winning album also featured two Grammy-nominated singles, “Like a Woman” and “Nobody Knows.” That same year, Rich who has penned hits for Boyz II Men, Johnny Gill, TLC and Toni Braxton, entered the world of acting with his portrayal of Duke Ellington in the movie Hoodlum. 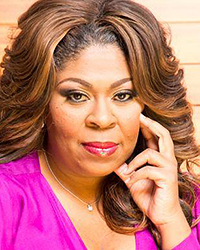 Gospel lovers will be treated to the musical stylings of Kim Burrell, a Grammy Award nominee and Stellar Award winner. Burrell, who calls her musical style jazz gospel, has quickly become one of the most influential voices in the genre. Her most recent project, “The Love Album” has won a Dove Award, two Stellar Awards and was nominated for a Grammy. In 2015, Burrell performed in The Signature Series at Berklee College of Music and continues to garner the attention of jazz, R&B and gospel fans worldwide.

Master saxophonist Ronnie Laws’ name is virtually synonymous with good music. True Laws fans know this gifted contemporary artist is by no means a new comer to the business. The first saxophonist for Earth, Wind and Fire, Laws’ 1975 debut album Pressure Sensitive, became the longest-selling album in the 42-year history of the Blue Note Records label. His first hit, “Always There” was one of the most popular, sax-driven, cross-over hits of the 70’s Jazz-Funk Fusion Era.

Tia Fuller, a multi-instrumentalist/composer/educator with credentials second to none, has played and recorded with some of jazz’s biggest stars. In 2006, she was hired by Beyoncé for her all-female band and has emerged as a solo artist. Fuller toured with Esperanza Spalding as leader of the Radio Music Society horn section and in 2016, performed at New York’s famed Birdland as a member of the Mack Avenue SuperBand with Gary Burton, the Christian McBride Trio and Sean Jones. Fuller is currently a faculty member in the Ensembles Department at Berklee College of Music.

Sherry Wilson Butler received the Philadelphia Clef Club of Jazz’s 2013 Annual People’s Choice Award for best female vocalist. She has competed and placed in numerous competitions, including being a finalist in Savannah’s International Vocal Sing and the Washington, DC Jazz Network’s vocal contest. A native Philadelphian, she has a diverse portfolio of artistic accomplishments as a performing and recording artist, actress, producer, writer and vocal coach. In addition to her musical accomplishments, which include a solo CD, Truth Is, Butler is an educator and advocate for children’s rights and social justice. 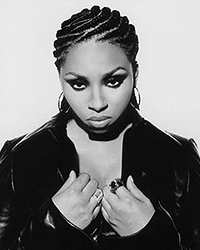 Philadelphia born and bred soul singer Jaguar Wright is known for her rich voice, honest lyrics and emphasis on her music’s roots in soul. As notorious for her impassioned, spine-tingling vibrato as she is for her show-stealing performance at Jay-Z´s 1999 MTV Unplugged concert with The Roots, Wright is the quintessential soul maven. Music critics put Wright in line with artists like Jill Scott, Angie Stone and Erykah Badu. In 2012, Wright assembled a “rock & soul band” of seasoned Philadelphia musicians called The W.E., an acronym for “The Wright Experience.”

The exciting and energetic Worldtown SoundSystem is a house music band that fuses musical elements from around the world. With members from Jamaica, Nigeria, Brazil, Alabama, Vermont and Philadelphia, it truly captures the essence of global culture through music. The band’s vision is to unite cultures through various realms of entertainment and celebrate the wide spectrum of diversity in America.

The entire line-up will be held together by Jeff Bradshaw, North Philadelphia born and bred soul/jazz innovator who has changed the way people view the trombone. Bradshaw honed his musical chops in his North Philadelphia church, United House of Prayer for All People and the Clef Club’s Youth Band. In 2012, he released his sophomore double CD, “Bone Appetit” which debuted on the Billboard contemporary jazz charts three times in the Top 25, and twice in the Top 10 as high as #3. The CD was also nominated for an NAACP Image Award for Best Jazz Album. In 2014, he released “Home,” the first R&B album recorded live at the Kimmel Center. Never one to forget from whence he came, Bradshaw and his musical friends perform each year at “Jazz on the Ave” and takes the audience on a soulful, jazzy adventure!

“I love the diversity of this event,” said Christine Brown, director of Beech Community Services and the festival. “To have so many people, from so many backgrounds, come together and help us celebrate the history of jazz and other great music genres is humbling, and will motivate us to continue producing this festival for the next 10 years and beyond. Beech Community Services continues to play a major role in the area’s revitalization by bringing social, education and community services to the area, as well as supporting its redevelopment efforts.”