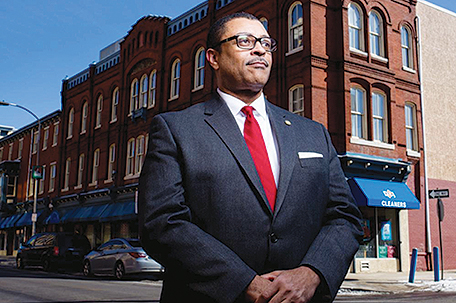 “If people would tell the truth, what we know is that African American businesses have never been on a level playing field. There’s far more obstacles in the way for a Black-owned business owner when they apply for loans and grants, than Whites. When Black-owned business owners seek out store-front rental properties and securing credit from lending institutions, the challenges are often overwhelming.”

That’s why Dr. Ken Scott, president and CEO of Beech Companies in North Philadelphia, says that thinking outside the box is critical to help Black owned businesses not only survive, but become sustainable. Beech Interplex, Inc., one of the subsidiaries of Beech Companies, has a purpose to spearhead the revitalization of the Cecil B. Moore neighborhood in particular.

However, they accept grant applications citywide. Beech Interplex works to coordinate efforts and services of organizations, financial participation in projects, the leveraging of funds, and through monitoring and facilitating appropriate adjustments in the improvement process. Since the COVID-19 crisis, revitalizing businesses and nonprofits is a front-burner issue.

”We’re blessed that our organization is in good shape, even through the pandemic,” Scott said.  “We have reserve funds, so no one here had to be laid off. In fact, our work has increased. What’s happening right now in our community goes back to our original mission. We’re here to be helpful and to support the community.”

“Thank God we have a foundation that we set up to give out grants,” Scott continued. “Our grants are supposed to just be given to 501c3 non-profits with the IRS. But due to the economic crisis caused by COVID-19, and so many small businesses being in dire straits, we made the decision to be flexible. This is an emergency. This is a world-wide emergency, this pandemic. We need to support organizations, whether they have their 501c3, or not, whether they’re officially government approved or not. We know who the food pantries are, that are doing good work. We know who needs the support. We’ve been giving out grants to organizations being flexible when need be.  We’ve been working with some of the larger, more well-known organizations as well.“

Scott admits he’s been amazed that some government agencies, even in the midst of a national emergency, are still trying to hold small business owners and non-profits to the rules.

“Some small business owners or non-profit leaders have come to me and said that they’ve been turned away from getting government funding because of things like liens on a property for trash issues, or other ridiculous reasons,” he said. “If you’re behind in your taxes, that can be a barrier. Organizations like Beech get partnerships with the city, and then city officials come and drop rules and regulations that make it very difficult for small businesses to get help. It should be the other way around.City officials should say, ‘We’ll give the grant money to the foundations, knowing the Foundations are less restrictive, and move in that direction.’ ”

“It seems like there’s some in city government, that seems like they’re trying to capture money and then out all the government regulations on top of that. What sense does that make?” Scott added.

Getting contractors on board for opportunities utilizing government grants is another hurdle that the leader of Beech Companies deals with on a regular basis.

“We’re very proud at Beech Companies to be able to say that we’ve supported over 1,600 different businesses who have received some kinds of contracts from us over 30 years and 70% have been Black owned,” Scott said. As for the Cecil B. Moore Avenue business corridor, after looting took place in a number of neighborhoods across Philadelphia between May 30 and June 2, the street that is encased by Temple University survived without too much damage. A few businesses sustained some damage, according to Dr. Scott, but most storefronts were fine.

Largely, the businesses along Cecil B. Moore Avenue need help from the forced shutdown because of the coronavirus, rather than from looting losses.  A new funding round for major non-profit support is coming up through Beech. The organization gives out the largest grants they have to offer, twice a year.

The next round of grant applications will start in the fall. There are month by month assessments happening for nonprofits. Beech Companies also have COVID-19 grants that are available for small businesses.

“It was quite a fight getting that COVID-19 funding for our businesses,”  Scott explained. “Some people think that money just falls from the sky, and it’s free money. No. We were in there, behind the scenes, fighting to get these funds for business owners in our service area for over six weeks. At Beech, we give a lot of nonprofits and small business owners lines of credit and loans. What we recognize is that these organizations and small business owners are already drowning in debt.”

“The funding we’re dealing with right now are dollars coming from the federal government,” Scott continued. “The federal government didn’t say these loans had to be repaid. So why is the state saying, ‘Give it to them as a loan, and then they can repay the money’? We went back and forth with elected officials about this, and finally, it was decided we can distribute this money to targeted businesses as grants. State Senator Vincent Hughes and some other lawmakers are to be credited for helping in this fight. Ultimately, Governor Wolf agreed. That’s how this grant money came about. We prevailed and now small businesses will be able to get grants — forgivable grants.”

The COVID19 grant amounts depending upon need, and range from $5,000 to $50,000. The Beech Company is a Community Development Financial Institution, (CDFI). To learn more about The Beech Company and Beech Interplex, Inc.,  visit: www.beechinterplex.com, or call: (215)763-8824.

Enter your business in the Black business directory for North Philadelphia