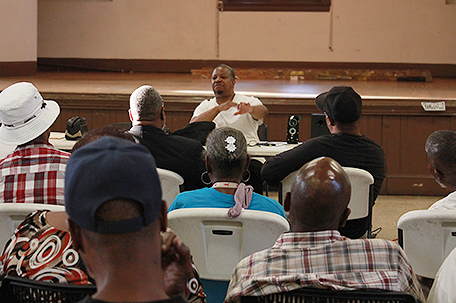 Because so much of hip-hop glamorizes drug use and opiates, how can it possibly be a healing tool?

That’s the question that Ronald Crawford ponders aloud to a room people wondering about the correlation between the trauma in their lives and hip-hop during Hip-Hop Therapy 101, a seminar designed to use hip-hop as a means to help communities deal with their trauma.

Crawford, a therapist, hosted the free seminar at the Cecil B. Moore Recreation Center on 22nd and Huntingdon Streets on June 28. Because he saw so much trauma among the people he works with, he felt it was his duty to give the community an avenue to heal.

“In order to treat people culturally, you have to make them comfortable,” Crawford said. “I’ve experienced similar situations as my clients growing up in North Philly, so I wanted to come back to the neighborhood and give back.”

Crawford’s work is part of the Department of Behavioral Health and Intellectual Disability Services Peer-Based support initiative. He believes that he’s able to better connect with the people he works with because he is, in his words, a “wounded healer”.

A central topic Crawford covers in Hip-Hop Therapy is synthetic opiates. The number one cause of accidental death in the country is drug overdose, and that 80 percent of those who eventually turn to heroin got started by abusing prescription painkillers, he said.

Fentanyl, a painkiller that’s anywhere from 50 to 100 times stronger than morphine, is sometimes combined with heroin, has caused a rise in the number of overdoses. In 2016, 50 people in the city’s Kensington section overdosed in one day.

The connection between trauma and addiction is something that Crawford knows all too well. From the age of  5 through 15, he saw his mother physically abused by his father and witnessed gang-related violence, causing him to have feelings of doubt, fear, and low self-esteem. Drugs became a salve for these feelings, and from the age of 17 Crawford heavily abused cocaine for the 10 years, a substance often glorified in hip- hop. In 1990, Crawford sought treatment for the addiction and has been sober for 26 years, 10 months and counting. 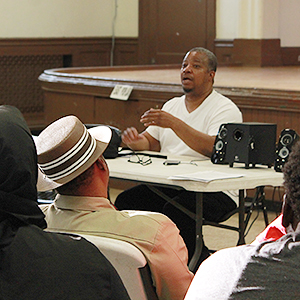 As a trauma survivor who still works through personal challenges, Crawford vocalizes his story to enthusiastic guests. Dressed in a white tee, jeans, and sneakers, one would think that he’s an attendee at first glance.

That’s intentional, and born from his own experience, Crawford said. When he first started his recovery journey, he was reluctant to seek therapy because he didn’t trust the system and, like many Black men, was taught not to cry, show weakness, or ask for help. He urges others to think differently and seek mental health assistance.

“I’m a therapist and I look just like you,” he said. “Mental health and therapy isn’t corny. We’re not crazy if we seek therapy, if we don’t get therapy, we get crazy.”

What better way to shine light on early detection of drug use and trauma than to create a scenario in which talking about these issues is comfortable? Is talking about Jay-Z’s “Reasonable Doubt”, Biggie Small’s “Ready to Die”, or Meek Mill’s “Dreams and Nightmares” albums uncomfortable?

Do lyrics like: “Saw death comin’, when she seen it she just cried

Prolly part of the reason we drink and we get high

In most cases, the answer would be no, as those who came to the seminar love each of the above albums mentioned, never thinking about the drug references, violence, or the trauma-laden lyrics.

Although much of the treatment is peer-based, workshops like Hip-Hop Therapy serve as an attempt to heal the community as a whole through encouraging healthy behaviors in a cost-effective way.

This form of music therapy treats those in recovery and those experiencing anxiety, depression, and Post Traumatic Stress Disorder due to their environment. The workshop started through a Facebook post written after a shooting that happened blocks away from the Stop and Surrender Program treatment center where Crawford works at 23rd and Huntington Streets. The shooting left nine people wounded, and knowing that none of the victims would seek treatment for their PTSD symptoms left Crawford frustrated. When a co-worker suggested he take the therapy to them, he started the Hip-Hip Therapy program.

Before becoming a therapist, he was a GED instructor to disenchanted students having trouble understanding the English language through Shakespeare and Mark Twain classics. Creativity was best and he asked, “Who’s the Best Rapper? Biggie, Jay-Z or Nas,” leading to a dissection of the music through English devices like consonance, personification, and hyperbole, and later penned a book of the same title in 2010. This method made the students excited to learn and thus successful.

It’s the same method he uses for his therapy sessions. Lyrics are discussed not by literary device, but through trauma and pain.  Honesty Hurts Publishing and Counseling, the book publisher, helps facilitate the workshops.

The possiblity for positive outcomes through the program has been encouraging.

“This class can influence millions across the world,” said Nancy Desrosiers of Frankford, a member of Stop and Surrennder. “Not] just Blacks, but people of all races because hip-hop is a universal language. Mr. Crawford can impact change in the hip-hop community in terms of mental challenges, substance abuse, suicide and murders and create a new revolutionized state of mind that we as a hip-hop culture would evolve into.”

This is only the beginning for Hip Hop Therapy. PASCEP — the Temple University community-oriented education program — will offer it as a course this upcoming fall semester, and Mr. Crawford is currently working on partnerships with other community organizations to expand his reach to other trauma- riddled communities.