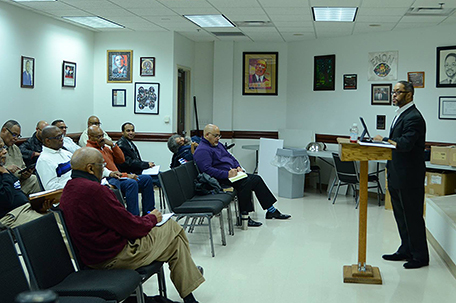 Human trafficking is slavery. While slavery is the practice of making human commodities that engage in labor with little or no compensation, trafficking also involves other acts of force, fraud or coercion. Victims of human trafficking can be physically and/or psychologically trapped into this modern version of slavery, according to various anti-trafficking nonprofits.

The Salvation Army, that co-chairs the Philadelphia Anti-Trafficking Coalition, broadens the definition to include “control of victims for the purpose of engaging in commercial sex acts of labor services against his/her will.”  This type of human trafficking can be found in residential brothels, escort services, fake message businesses, strip clubs, and street prostitution. This is differentiated from labor trafficking of primarily domestic, farm, factory, and other business workers. So, this coalition is addressing local human trafficking.

So, in this second article of the Philadelphia Sunday Sun’s human trafficking series addresses how Philadelphia’s faith-based community is taking the lead in educating local citizens about sex trafficking in the Delaware Valley region will be addressed. Leading the way is the Enon Tabernacle Baptist Church, who with its two campuses in Mount Airy and Germantown, is raising awareness and doing outreach through its “She’s My Sister” ministry. This was evident when they held their Second Annual Human Trafficking Conference during last month’s National Human Trafficking Awareness Month.

“Until we have eradicated human trafficking, we are going to keep raising awareness,” said Ellyn Jo Waller, Enon’s first lady. “We as a society have to take responsibility for doing away with this. We are called to do a paradigm shift. This is something and bring up to face just like how in the past we have had to face up to domestic violence.

That is why this ministry is called ‘she’s my sister’. Maybe she’s not your sister in the literal sense, but we need to go beneath the surface. We have to start to look at each other as if we are all family and we do not want to put any of our children violated or put in danger.”

Waller was quick to point out that this will have to be a comprehensive approach to dealing with trafficking. Although one needs lawmakers, law enforcement, and community advocates to step up to the plate, it will require more.

“There is a real danger here,” Waller said. “The average age a girl enters this is about 13. They keep getting younger and younger. We, as a culture have to deal with this, and this is something we have to do something about. We have to look at what type of society needs victims of human trafficking. Why are we putting human beings in danger and harm’s way?”

Enon launched their program with stories of actual Philadelphia area sex trafficking victims. The Philadelphia Police Department was represented. There were workshops, including one geared for men. Among those at the first and second Enon conference was keynote speaker, Maheen Kaleem, a law fellow at the Human Rights Project for Girls and Court of Common Pleas Judge Lori Dumas. 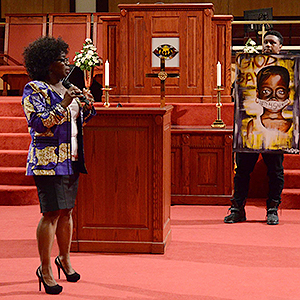 “Francine and I facilitated a workshop about the resources for those who are victims of human trafficking,” Dumas said. “She is a forensic nurse and I work for the courts. We want people to know that one does not have to remain a victim….that one can leave and start life again.

“First, we must begin to face what this is. It is not a pretty picture. There are several triangles involved in starting this and all types of partnerships will be needed to help get us out of it. We have to bring more resources to getting rid of this…We can make a difference,” Dumas said.

Councilwoman-At-Large Blondell Reynolds Brown has also been a champion of combatting human trafficking through legislative efforts such as the Commission for Women and resolutions authorizing the Committee on Public Safety to hold hearings to investigate Human Trafficking in the City of Philadelphia.  She recently spoke on human trafficking awareness on the last Stated Meeting of Philadelphia City Council held last Thursday, January 26, 2017,  https://youtu.be/U4dxDhH06E0.

Yet the Enon Tabernacle Baptist Church is not the only faith community that is raising awareness locally. The Center for Peace for Spiritual Living, located at 1921 Beech Ave. in Elkins Park along with Philadelphia branches of the Salvation Army have also been educating about this. The Center for Peace convened the “Breaking the Chains of Modern Day Slavery” last summer. They are planning to hold a follow-up conference this year. At their inaugural trafficking event they featured guest speakers who made presentations and answered questions from those in attendance.

Among them were Audri Scott Williams and Karen Hunter Watson, known as the “World Peace Walkers.” They are co-chairs of the Red Flame for Freedom Movement to End Modern Day Slavery.

“When we know something is wrong then we have to get to the roots to dig them out,” Williams said. “We are better than things like human trafficking. We can no longer bury our heads or think that we are merely observers. We have the capacity to change the world, but we need to want to do it.

“That is why we took the streets in communities through the United States. Among the cities we went to were not only Philadelphia, but also Baltimore, Atlanta, Tampa, Houston, New Orleans, Las Vegas, L.A., San Francisco, New York, Chicago, and Charlotte. We need to raise awareness about the proliferation of modern day slavery experience through sex trafficking and all forms of human trafficking. This is an American issue and may be closer to your world than you think.”

Like Enon, the Salvation Army is addressing the actual rescuing of those who are living “the life” as well as educating local communities. The Salvation Army’s New Day Women’s Drop-In Center, 2659 Kensington Ave., is a safe haven for local sex trafficking victims. In fact, the two faith communities are working cooperatively in the development and operations a large transitional space in Lower Montgomery County.