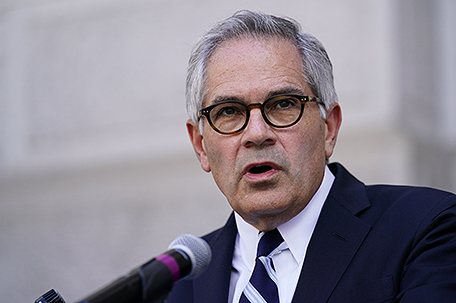 Larry Krasner won a second term as Philadelphia’s district attorney, and it wasn’t even close.

Shortly after the May primary, District Attorney Larry Krasner announced that he wouldn’t be participating in any debates with his Republican challenger, defense attorney A. Charles Peruto Jr.

As it turns out, he didn’t need to. He didn’t even really need to campaign.

Krasner soundly defeated Peruto by nearly 74,000 votes on Election Day to claim his second term as Philadelphia’s district attorney. While Krasner didn’t campaign much, Peruto’s campaign consisted mainly of signs hung on poles and certain buildings around the city.

For his part, Peruto was humorous in defeat. In a Facebook message to his supporters, he expressed gratitude for their faith in him.

“I want to thank everyone on here for your support,” he said. “Unfortunately, FB doesn’t count for votes, and few did. I had a good learning experience and know firsthand it takes at least $1,000,000 just to get started city wide. Larry had an overwhelming ground game at the polls, which made me realize early, I wouldn’t reach my goal. I took a country ass kicking, but somehow, [I’m] still a happy guy.”

A jubilant Krasner met with his supporters at the Sonesta hotel in Center City. For many in the room, his second term in the District Attorney’s office was the result of rewarding the faith of those who put him in office.

When he thanked his supporters, Krasner promised that he’d continue working to keep his office going in a more progressive direction.

He also had a message for his colleagues in the Democratic Party. Unlike the November 2020 Election, where a record breaking 68% of Philadelphians turned out to vote, turnout was an anemic 18.44% on Tuesday.

While that could be attributed to the fact that there wasn’t a marquee race at the top of the ticket like mayor, governor or president, Krasner believes that it was because the voters didn’t have an issue they cared about, like criminal justice reform, on the ballot.

Criminal justice issues attract people who may not have voted otherwise, Krasner said.