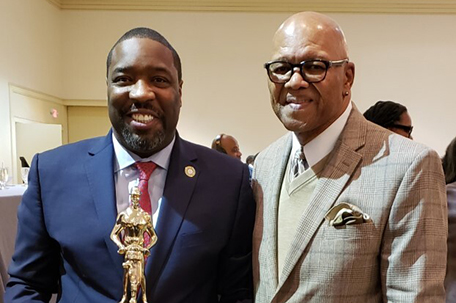 A week after closing arguments concluded in the corruption retrial of Philadelphia City Councilman Kenyatta Johnson, his wife, consultant Dawn Chavous, and two former Universal Companies executives, a jury has found them not guilty on all charges.

After five days of deliberations, the jury announced late Wednesday that the government hadn’t proven that former Universal Companies executives Rahim Islam and Shaheid Dewan had given Johnson $66,750 in exchange for helping Universal retain control of a group of dilapidated South Philadelphia properties, including the former Royal Theater. The government alleged that the bribe was in the form of a $66,750 contract with Johnson’s wife, Chavous.

When the verdict was announced, supporters of the group, while quiet, expressed happiness with the decision.

Johnson wiped tears from his eyes as the verdict was read, but Chavous, who hadn’t really shown much emotion during the trial, openly sobbed, and was comforted by her husband and her mother, Barbara Chavous, who was in court almost every day of the proceedings.

After the verdict was announced, Johnson, his attorney Pat Egan, and Chavous and her attorney Barry Gross were met by cheering supporters and media gathered outside of the James A. Byrd Federal Courthouse on Market Street.

While he didn’t take questions, Johnson expressed his thankfulness for the verdict and pledged to get back representing his district, which represents parts of South and Southwest Philadelphia, including his native Point Breeze.

“First of all, I want to thank my Lord and Savior Jesus Christ for covering me and my family and for allowing us to get a positive verdict today,” Johnson said. “I also want to thank our jurors. But I want to, most importantly, thank all of my supporters for their calls and their emails, and for showing up to court and believing in us.”

“We very much appreciate the jury’s verdict, and we’re very happy that Mr. Johnson and Ms. Chavous can go back and resume their lives,” Gross said.

That was also the wish of Johnson’s stepfather, Ronald Martin.

“I’m happy because I really look at him as the Golden Child,” he said. “That’s what I call him —  the Golden Child. He’s been blessed. He kept the faith; he believes in the Lord Jesus Christ as his savior. And now, he’s innocent.”

City Council President Darrell Clarke acknowledged the decision and said in a statement issued shortly after the verdict that as far as Council was concerned, nothing changes with Johnson’s return.

“A jury of Councilmember Johnson’s peers has spoken, and its verdict is not guilty on all counts,” he said. “They have done their jobs and rendered justice. City Council has never been distracted by these trials and remains focused on the urgent issues confronting our city – public safety and gun violence, restarting our economy after COVID-19, and creating more jobs, opportunity and hope for every Philadelphian. Council will continue doing our jobs for the people of Philadelphia every day.”

Toward that end, Johnson returned to City Council on Thursday. He thanked his colleagues for their support during both the original trial and the retrial.

There were many things that happened during the trial that threw many in the room for a loop.

Hours before the verdict was announced, a juror was dismissed from the panel and replaced with one of the remaining alternates in the case.

In another unusual move, Judge McHugh had brought individual jurors into his chambers to speak with him and the attorneys on both sides of the case. Judge McHugh also went into the jury room and had an on-the-record communication session with the jury on the fourth day of deliberations.

There was speculation that there might be another mistrial in the final two days of deliberations as the jurors kept asking questions and wanted to see more evidence.

The trial and the retrial were part of a 22-count indictment handed down by the Department of Justice in late 2020. The bulk of that indictment, which includes a variety of crimes, including racketeering and embezzlement is directed at Islam and Dewan. The jury of eight women and four men began hearing that case on Friday.

“We have taxed them as much as we can”