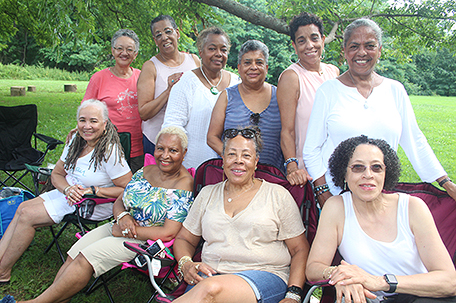 Nearly three-hundred family members and friends came out for the 2017 Annual “Back in the Day Picnic.” (BITDP) The picnic was held on an especially beautiful day in Blue Bell, Fairmount Park on July 15. Kudos to the BITDP committee for the planning and work that they did throughout the year. It resulted in bringing people together to celebrate life and friendship in a very special way.  Committee members Lynda Brown Bagley, Malcolm McGraw, Michele Lewis-Bell Roberts, “Bobby” Robert W. Williams III, Barry Crawford, Harold “Rusty Frye, Donald Johnson, Norris Roundtree and Keith Crawford are a terrific team.

Tents were pitched, coolers unloaded, and grills were fired up in the morning. There were hugs, laughter and joy in seeing friends who traveled from as far as California for the occasion. The BITDP was inspired by the loss of a dear friend, Lynda Brown Bagley said, “The consensus was to gather friends together in a fun- filled family day that also acknowledged those gone but not forgotten,” she said. That is why friends form a circle of remembrance at the end of the day. The Rev. Antonio “Tony” Webster led all in prayer, and the names of beloved friends were spoken. 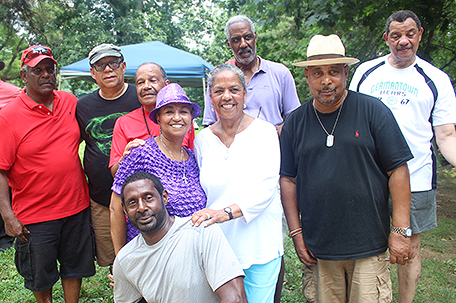 The committee for the annual Back In The Day Picnic, take a group photo. (Photo by Robert Mendelsohn)

The fun included dancing the bop, cha-cha, and other line dances to great music played by DJ’s Harold “Rusty” Frye and Randy Kirkland. Everyone sang Stevie Wonder’s “Happy Birthday” to Barry Crawford, who danced under the sun with his lovely wife Jackie. The Crawfords were joined by many family members, including children and grandchildren.

It was another great day “All Around Philly.”