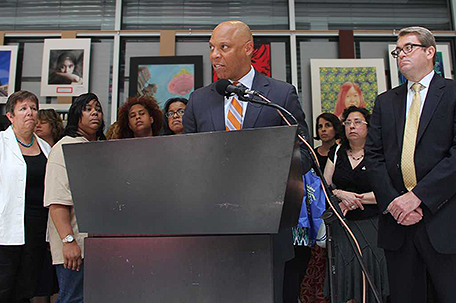 Neff replaced former Gov. Tom Corbett appointee Bill Green as chair of the SRC, a position with responsibilities such as setting the agenda for meetings and signing all district contracts.

But Neff, a former principal of Julia R. Masterman, a special admissions district-run school, said she’s not expecting to shake things up. “I’m a collaborator, I’m interested in making sure all voices are heard,” she said the day after the shakeup. “So I don’t think there’s going to be any changes.”

As for new directions, Neff said she is “just trying to support the governor in his reinvestment in public education.”

Green has “graciously” stated he would work with her, Neff added.

“We work as a team together,” said Green, who said he didn’t expect the decisions coming out of the SRC to change with new leadership.

One reason given for the change, via a Wolf representative, was the governor’s unhappiness over the SRC’s approval of five new charter schools last month. However, a different chair would not necessarily have changed that outcome.

“Each commissioner gets one vote,” said Green. It takes three votes to pass any measure through the SRC.

In a statement, Wolf called for new investments and a “fresh path” forward for the district, adding that it will be “refreshing to have an educator who understands the needs of our schools as chair.”

Green ‘respects’ the decision, but questions its validity

Although he has promised to step down in function, Green still identifies himself as chair and said he plans take the governor to court over his removal from the office of chair.

In response to the Wolf’s appointment of Neff, Green said, “I respect that decision, but I don’t think it was valid.”

Green said the district will not foot his legal bills for the case, but “if anybody wants to help, I would appreciate it.”

Speaker of the Pennsylvania House and vocal charter proponent Mike Turzai, R-Allegheny, has said he may join Green’s case against Wolf.

According to the state public education law, “The governor shall appoint a chairman of the School Reform Commission.” But the law also says that “no commission member may be removed from office during a term” unless there is a clear case of wrongdoing.

What’s not clear is whether the “office” in question includes the office of chair.

Several legal experts said there is no existing legal ruling that applies directly to Green’s case, so the judicial system will have to explore parallel cases regarding other statutes and interpret the intent of the law.

Intent is where Green feels like his case can win.

“We do hard things,” said Green. “So we’re supposed to be above political winds and influence.”

Saying that means appointees can vote without fear of political repercussions, Green said, “You serve that term with the knowledge that you can vote your conscience.”

In a video posted to the district’s Facebook page, Green said he had received an opinion from the district’s legal counsel that he would be able to serve an entire term as chair when he accepted that position.

In the context of a new SRC chair, Superintendent William Hite and Green said Monday district representatives met with teachers over the weekend “to no avail” in the on-again, off-again negotiations for a new contract.

The SRC voted to cancel the Philadelphia Federation of Teachers contract in October. The PFT sued the SRC over that decision, and the Court of Common Pleas and Commonwealth Court have sided with the teachers. Last month, the SRC advanced its appeal to the state Supreme Court.

After many months away from the negotiating table, Green said negotiations have regressed. “They’ve requested additional money and backslid on some of the work rules that we’ve had,” Green said.

The rift “between district and the [union] appears to be growing wider” and “positions have hardened,” Hite said.

His dismissal as chair of the SRC sends a bad message to the union, Green said.

“I’m afraid they’re getting encouragement for that intransigence by this action,” he said.

During his gubernatorial campaign, Wolf said he would abolish the SRC altogether and move to put the School District of Philadelphia back under local control.