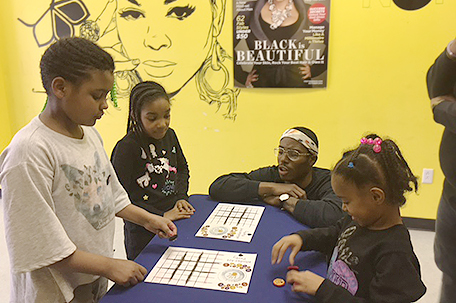 ABOVE PHOTO:  Dakota Michael Pittman, one of the three founder of Art(is)4Kids, teaches a board game to youngsters at the nonprofit’s event held at Blues Babe Foundation on Avenue of the Arts North.  (Photo courtesy: Arlene Edmonds)

ART(IS) 4 KIDS — a nonprofit arts organization– is expanding. After its jam-packed “Poets & Painters” opening at Open Space in January, it followed up with a children’s arts event at the Jill Scott’s Blues Babe Foundation. They returned to Open Space for another arts event on Saturday, February 25th, kicking off  a full roster of activities.

At the Blues Babe Foundation event, Brandon Ballard, Dakota Michael Pitman, and Aquil “Taj” Tajiddin were on hand to greet the dozens of youngsters with  three houses of games featuring Harlem Renaissance themes, drawing projects, and an opportunity to create their own pin-on buttons. Several volunteers were also on hand which gave the children individualized and small group attention.

Among the young girls enjoying the festivities were 8-year olds Laila Savage and Janell Payne. The content director Jonai Gibson-Selix said that the girls were exploring the trivia they knew about the Harlem Renaissance era. “We wanted them to explore three different activities during these arts and crafts workshops. We wanted it to go beyond the basics, so that’s why we included trivia games that help them to learn new things,” Gibson-Selix said.

“We at Art Is 4 Kids are really trying to build relationships,” Ballard said. “We have a great group of supporters. We were able to use this space through Aisha Winfield, one of the junior music executives. The Blues Babe Foundation wanted to have a quarterly creative event for the children and we will be providing this. So, the next one we will have here will be in April.”

Yet these are not the only children’s workshops on the Art(Is) 4 Kids itinerary. The nonprofit has recently partnered with the Finley Playground, located at the corner of Upsal and Mansfield streets in Mount Airy. At that city-run recreation center they will have a stable program of creative and performing arts workshops for children. Like the February 25th workshop, it will be offered at no cost to those who attend. 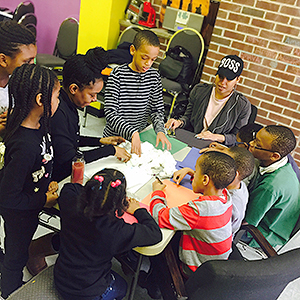 Pitman readily admitted that being surrounded by elementary and middle school aged youngsters brought out the child in him. He said he enjoyed the collaborative spirit of the children as they assisted each other with the art projects and were interactive. “Just to see the amount of smiles on their faces is great,” he said.

Tajiddin added that he felt that having a workshop like this was filling the void many experience while attending some of the city’s schools. Since many have eliminated art and music programs some children are never exposed to the arts in a classroom or group setting.

“We try to bring culture to the children as we help them navigate this space,” Tajiddin said. “It’s nice when we get to engage with the children directly. It gives them the opportunity to see young men who are having fun with them in a safe environment. So, they are painting, making crafts, creating their own buttons and learning history in one space.”

Parrish and Jordan Plain of North Philadelphia, the owners of Plain Sight Button Collaborative, conducted the button making workshops. They also provided the buttons with Harlem Renaissance figures for the day’s trivia games. The Plain brothers are graduates of the Academy of Palumbo. It was in the 11th grade that they took a studio design course. They not only learned about fine tuning their artistic prowess, but also how to make buttons.

Soon they were creating buttons and selling them informally to their personal network. This included their classmates, teachers, persons in their immediate neighborhood, and family members. As the referrals increased they started a vending business that catapulted into a button making company. The brothers are still very hands on, according to Jordan Plain. At the February event they were both showing the children how to create art to fit in the button and actually pressing the buttons themselves.

Another partner of the Arts (Is) 4 Kids program is Pili X, who works with North Philadelphia’s Peace Park, a charitable ecology group. He said that in the future he would like to offer the nonprofit a workshop focusing ecology issues, basic landscaping, and creating peaceful neighborhoods through artistic and sustainability projects.

Art (Is) For Kids