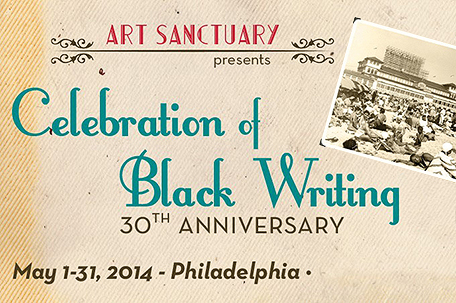 Renowned artists, writers and journalists from across the U.S. will join Art Sanctuary, Philadelphia’s leading African-American arts and letters organization, at the 30th annual Celebration of Black Writing, running May 1-May 31, 2014.

The Celebration of Black Writing is one of the oldest African-American literary events in the nation with this year marking its 30th anniversary. It has grown from a one-day gathering of authors and literary scholars to a month-long event, filled with programming that appeals to all ages, backgrounds and interests. This landmark Celebration beckons a month of inspiring programming that promises not to disappoint, including:

An outdoor family festival in South Philadelphia on Saturday, May 3

The ‘In the Sanctuary’ podcast, featuring interviews with Philadelphia’s most notable writers and authors – sponsored by PECO and running Monday-Thursday of every week, live from the Art Sanctuary gallery

A festival staple, this year’s Lifetime Achievement Award reception will take place on Friday, May 20 and will honor the incomparable Ernest Gaines, author of such books as ‘A Lesson Before Dying, ‘A Gathering of Old Men,’ and ‘The Autobiography of Miss Jane Pitman,’ with the Lifetime Achievement Award. His works have been taught in college classrooms and translated into many languages, including French, Spanish, German, Russian and Chinese.

Additionally, Art Sanctuary is proud to announce the inaugural ‘Gamble & Huff Award for Excellence in Songwriting,’ which will be presented by multi-platinum songwriter, producer, and founder of Philadelphia International Records, Kenny Gamble to the notable, multiplatinum songwriting and production team, Carvin & Ivan.

At the center of this year’s festival is a month-long exhibition, featuring photos from the famous Chicken Bone Beach in Atlantic City, New Jersey.  Located on the long stretch of the Jersey shore just south of downtown, Chicken Bone Beach was designated as the exclusively African American section of beach around 1900.  It remained a blacks only beach until the 1964 Civil Rights Act was passed.  Ironically, before 1900 blacks and whites in Atlantic City lived side-by-side and African Americans used the beaches without restriction.  By 1900 hotel owners pushed black beach-goers from the fronts of their establishments down to the Missouri Avenue beach south of the Million Dollar Pier.  By the 1940s, black entrepreneurs began to provide entertainment during the summer evenings. Leading black performers such as Sammy Davis, Jr., Louis Jordan, the Mills Brothers, Jackie “Moms” Mabley, and the Club Harlem showgirls, staged shows for black tourists and local residents.

By the 1970s Casinos further changed the culture of the beach by making Atlantic City into a world class resort which in turn limited access to all working class families. To protect this endangered African American heritage site, the Atlantic City Council passed an ordinance in 1997, declaring Chicken Bone Beach a historical landmark. There are an estimated 300,000 photographs and negatives preserved in the Charles L. Blockson Afro-American Collection of Temple University Libraries of the iconic beach taken by the Philadelphia photographer, John W. Mosley.

For more information and to get a full listing of the 30th Celebration of Black Writing lineup, visit www.artsanctuary.org and follow @ArtSancPhilly on Twitter.