Art (Is) For Kids 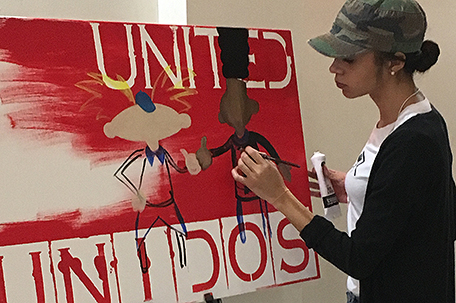 Art (Is) For Kids is challenging Philadelphia’s African American community to think of new ways to use the arts. So, when they held their Painters & Poets event a full house came out to see painters create live while poets wrote and then recited their lyrical reactions on the spot.

Now, exactly two months later the new nonprofit has its sight set on creative arts event for children to be held during Black History Month, and then a permanent series of workshops for children and performance opportunities for adult artists to showcase their talent.

This venture is the brainchild of Brandon Ballard, Dakota Michael Pitman, and Aquil Tajiddin. The three first met while students at the Carver High School for Engineering and Science in North Philadelphia. Then they separated and attended different HBCUs. When they returned back home to Philadelphia they revived the nonprofit idea they tossed around as high school sophomores. That was in 2009.

“We are really excited about the response to the first recent events we had so far,” said Ballard, the marketing director. “We felt that the turnout for the Painters & Poets was beautiful. It even exceeded our expectations. But, the feedback is encouraging us to take it to the next level. We exceed our goal as far as creating programs with responsibility and collaboration.” 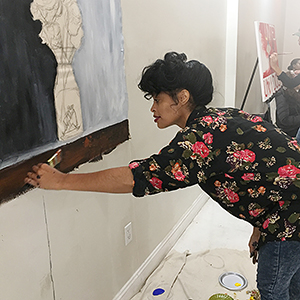 The Art (Is) For Kids program has joined together with many partners. The February program will be held in conjunction with the Blues Babe Foundation created by Philadelphia’s own Jill Scott. The vision of the singer, songwriter and poet was to bring arts workshops to children in her native North Philadelphia, according to Ballard.

“Right now we are still planning, but the date will be on Feb. 11,” Ballard said. “This will be interactive where children can come with their parents. We are planning on starting with about 15 to 20 children. We will have Plan Sight Button Company show them how to create their own buttons. We had them as one of the tables at our first event and they displayed their products and created our buttons.”

That initial Painters & Poets event was held at Open Space, 1014 N. Marshal St., also in North Philadelphia. There they collaborated with Frank Santos, manager of Open Space. There will be an ongoing relationship with Open Space as Art (Is) For Kids will be holding children’s workshops there on a regular basis starting in late February.

Santos was excited to have find an overflow crowd at the venue that includes a lower level recording and rehearsal studio in addition to the ground floor open space where Art (Is) For Kids founders held their special event.

He said that this was exactly the type of energy he wanted to see at Open Spaces. The artists brought their canvas and drop cloths to then begin painting. The poets sat on the floor in a corner deciding who would write about which artwork. Then there was the sound of poets mumbling words and tapping beats while the artists busily drew designs in pencil before filling in with vibrant colors. The poets then read their poems to the crowd were eyewitnesses of the creative process. 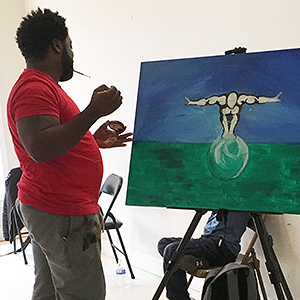 “This is kind of like a challenge,” said Stephanie Dyson, who served as event coordinator. “We wanted a space where artists could create with the energy of people around them. We wanted those who came to enjoy a mixer. Then the poets would interpret the works of art before we raffled off some of the art.”

Among the artists present was Gloria Santiago of Lawncrest. The Central High School alumnus said though she has been drawing all her life, she has been an artist for only a year. “I write from life and music is my vibe. I think that the energy here is about unity so I wanted to create something that showed that spirit,” Santiago said.

Jae Martin, a native of Brooklyn, New York, readily admitted that he began drawing as a graffiti artist. Martin said that he still integrates a touch of those that form of wall art into his paintings. So, at the Poet and Painters event he said that when he started professional art eight years ago he would not have engaged in a live event as that.

“Now I enjoy something like this,” Martin said. “Life is inspiring. No matter what I always have something to create. Sometimes it can be tragic or it can be good. It’s kind of nice to have to create when you are under a little pressure.”

For Shanina Dionna, painting before a live audience did not matter. She said that she can easily block out the onlookers. Her piece started out with dusty blues and black. A vase emerged and then a bouquet of flowers. She said it represented her heart. The layers of paint on the canvas and intense textures represented “the thickness of life,” she said.

Poet Ramya Ramana said she was assigned to create a spontaneous poem about Dionna’s work. She readily admitted that while growing up in New York, she was the introvert. Since her family is from the southern part of India, she grew up in a Hindu background. This is a religion that encourages one to go within, she said. Yet she has learned that art is to be expressed outwardly.

“I find watching that creating art is something that you share, but there’s an introverted side where you are not worried about out there,” Ramana said.

Artist Terrance Vann attributes since art comes from “the divine mind” when one is aware of that it can be restorative. “Growing up Black is a colorful life. We are creative and spiritual people. Whether it is surreal art or graffiti. For me in seeking the higher power and being inspired puts me into art. It is inspiring,” Vann said.

Among those in the audience was 13-year old Brandon Aldrich. He said that he was initially ambivalent about coming to the event. Yet as soon as he arrived he knew that this was an event that would interest him.

“I feel really comfortable here. I like the energy of all the artists. It made me want to create. I actually wrote a poem while I was watching the artist (Martin), but I will read it aloud another time because I am not that comfortable yet,” Aldrich said.

Ballard felt that the success of  Painters & Poets is a precursor for what Art (Is) for Kids will do in the future. He said that they will be doing a program in Northwest Philadelphia, likely at the Finley Playground in Mount Airy this spring.

The Art (Is) For Kids marketing director felt that it was positive that some younger ones were among those in the audience. “We just want to bring our local talent together, expose children to the arts. Events like this are one of the best ways to do that,” Ballard said.