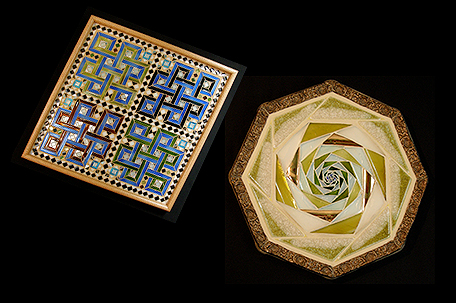 “Repurposed Bottles Contain Light” is the title of an exhibition that will feature Susan Kelly’s mixed-media/bottle glass mosaic works, along with original artwork in various media and styles by members of the Manayunk-Roxborough Artists Co-Op. The exhibit opens Sunday, September 11, 2016 from 11:00 A.M. to 3:00 P.M., during which Kelly will demonstrate her bottle cutting techniques and discuss her mosaic process. Presented at the Manayunk-Roxborough Art Center (MRAC), 419 Green Lane (rear), Philadelphia.

A fascination with bottle glass began in Susan Kelly’s youth, which she spent in Montgomery County, Pennsylvania, where she lives today with her husband. While she was taking a class called “Tile and Mosaics” in 2005, the instructor said that bottle glass was not typically used in mosaic art, partly because of its sharpness. Not deterred, Kelly learned how to cut bottle glass safely for her mosaic projects. She notes that the patterns she chooses are influenced by her practice of consulting the I Ching, and that a key influence on her work has been an attitude of making use of the materials at hand.

Kelly’s first solo show took place in 2014 at “Art in the Storefront” in Ambler, Pennsylvania. She won first prize in the “Power of the Flower” exhibit at the Markheim Art Center in Haddenfield, New Jersey in 2013. Her work has been selected for juried shows at Abington Art Center, the Markeim, and at MRAC. Kelly has been a member of the Mosaic Society of Philadelphia since 2012, and has exhibited her work at the Tyme Gallery in Haverford, Pennsylvania and the Roxborough Development Corporation’s gallery, among other venues. She is also a photographer, who has received Honorable Mention awards in juried shows at Abington and at the JAM Gallery in Malvern, Pennsylvania. She earned an Associate’s Degree in Art from Montgomery County Community College, and has studied at the Tyler School of Art.

“Siblings” is a rectangular mosaic, oriented in a “diamond” shape, that presents a repeated and complex geometric pattern, rendered primarily in blue, black, light brown  and green. Kelly writes that the work, “is very much influenced by my reading of a lesson on compassion from the Dalai Lama. The eternal knot, one of the 8 auspicious symbols in Buddhism…is a symbol that I find fascinating.” She notes that, “the four knots, each connected with the blue elements,” represent herself and her siblings. As she created the piece, the artist considered the symbolism of the eternal knot and its relation to the infinite. “The idea of more than one infinity is something fun to consider,” she adds. “Gold Continuum” is an octagon in mostly gold, amber and pearly white that suggests both a rosette and a wheel. Works like “6-5-4-3” and “Afflictive Impact” also demonstrate Kelly’s precision and purposeful color choices, which elevate the humble materials into realms both conceptual and aesthetically pleasing.