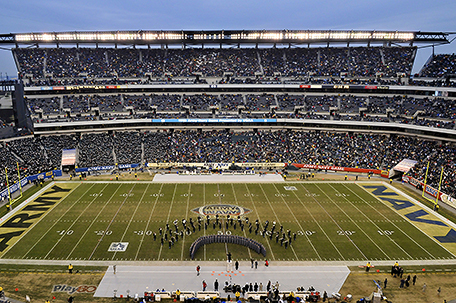 On Saturday, December 9, all eyes will be on Philadelphia as the 118th Army-Navy Game presented by USAA kicks off at Lincoln Financial Field. As fans know, the annual Army-Navy Game is more than just a gridiron match between the United States Military Academy (USMA) and the United States Naval Academy (USNA) – it’s a battle for a year of bragging rights for everyone connected to the institutions.  And as the game returns to Philadelphia for the 87th time, the city is expecting an influx of visitors over the course of the weekend, resulting in an anticipated economic impact of over $30 million for the Greater Philadelphia region.

Through the work of the City of Philadelphia, the Philadelphia Eagles and PHL Sports, a business development division of the Philadelphia Convention and Visitors Bureau (PHLCVB), Philadelphia was recently awarded four of the next five Army-Navy Games through 2022 (2018, 2019, 2020, 2022).

“It is our great honor to serve as home to the greatest rivalry in all of sports,” said Larry Needle, Executive Director of PHL Sports. “It is a true labor of love for all of our local partners, and we’re very proud to welcome the Academies and their fans from around the country again this year and for years to come.” 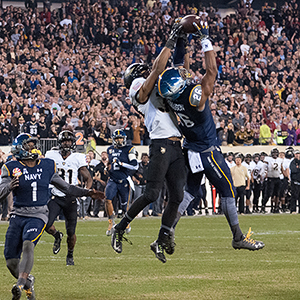 As always, the weekend will include the traditional pomp and circumstance, including the time-honored pre-game ‘March On’ of the Corps of Cadets and Brigade of Midshipmen, skydivers, flyovers and the singing of the alma maters.  In addition, ESPN College GameDay – college football’s longest-running and most-celebrated pregame show – will return to Philadelphia and make its fourth appearance at the storied annual showdown.

While the Army-Navy Game itself is the highlight of the weekend, it is not the only opportunity attendees have to participate. The 24 hours leading up to Saturday are full of exciting events and competitions to experience. The annual Patriot Games – a two-day, five-event competition between teams of Cadets and the Midshipmen – will take place at various Philadelphia landmarks, including the Rocky Relay, December 8 at 8:30am at the Philadelphia Museum of Art; the Leadership Reaction Course at the National Constitution Center at 10 AM, the Pull-Up Challenge, December 8 at noon at The Shops at Liberty Place; the Tug of War at 3pm at the Battleship New Jersey and the finale on Saturday, with the Stadium Obstacle Relay, December 9 at 1:15pm at Lincoln Financial Field.

Also taking place on Friday, December 8 at noon at The Shops at Liberty Place will be the Army-Navy Pep Rally, which will feature performances by the Academy pep bands and cheerleaders.

On Saturday, December 9, from 11am to 1pm, leading up to kick-off, fans can take part in the Army-Navy Tailgate inside Citizens Bank Park’s Hall of Fame Club, located across the street from Lincoln Financial Field.  Tickets are available for purchase.

For more information on all Army-Navy Weekend activities, and to purchase VIP hospitality packages, visit www.PhillyLovesArmyNavy.com.