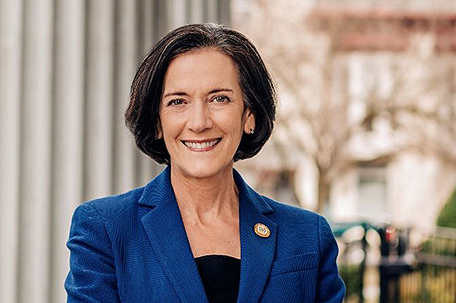 HARRISBURG, Pa. (AP) — Dr. Val Arkoosh, an anesthesiologist who led Pennsylvania’s third-most populous county through the pandemic before mounting a failed run for U.S. Senate, will be nominated to lead the sprawling Department of Human Services under the incoming Democratic governor, Josh Shapiro.

Wednesday’s announcement by Shapiro also included his picks to lead the departments of Health, Drug and Alcohol Programs, Aging and Insurance.

Arkoosh, 62, is a former chair of anesthesiology at Drexel University College of Medicine who now chairs the three-member board of commissioners in Montgomery County, in suburban Philadelphia.

Shapiro, the state’s two-term elected attorney general, will be inaugurated Tuesday to become the 48th governor of Pennsylvania.

On Montgomery County’s board, Arkoosh overlapped with Shapiro for two years before he was elected to attorney general.

During the pandemic, Arkoosh held daily, livestreamed briefings about the county’s efforts to stem the spread of COVID-19, as it became the first county where Gov. Tom Wolf ordered the shutdown of schools and businesses.

Arkoosh ran unsuccessfully for Congress in 2014 and was prominent before that in campaigning publicly for passage of then-President Barack Obama’s health care law, the Affordable Care Act. She again ran in the Democratic primary for U.S. Senate, but dropped her candidacy in February before filing paperwork to get on the ballot.

The Department of Human Services administers more than $50 billion in state and federal money, or about half of all the money that flows through Pennsylvania’s state government every year.

Much of the money is tied to the Medicaid program, the federal-state partnership that provides medical care for the poor, long-term care for the elderly and direct care for the disabled. In particular, the growing elderly population and the growing cost to care for them has rapidly driven up the program’s costs.

ADVERTISEMENT
Arkoosh and Shapiro’s other Cabinet selections announced Wednesday are subject to confirmation in the Republican-controlled Senate once they are nominated.

To head up his Department of Health, Shapiro selected Dr. Debra Bogen, a pediatrician who led Allegheny County through the pandemic as the director of the health department.

Before that, Bogen was professor of pediatrics, psychiatry and clinical and translational science at the University of Pittsburgh and served as vice chair of education for the pediatrics department at UPMC Children’s Hospital of Pittsburgh.

To be insurance commissioner, Shapiro chose Michael Humphreys, currently the agency’s acting commissioner after holding senior positions there and in Tennessee’s insurance regulator for the past decade.

Shapiro picked Latika Davis-Jones to be secretary for the Department of Drug and Alcohol Programs. She is currently the senior director of behavioral health at Highmark Wholecare, a Medicaid health insurance plan in Pennsylvania and subsidiary of Highmark Health.

For the Department of Aging, Shapiro picked Jason Kavulich, currently the director of Lackawanna County’s Agency on Aging.

Biden appoints Dr. Ala Stanford as Regional Director of Department of Health and Human Services