Ardella’s House, Inc. – A ray of hope for local women impacted by the criminal justice system 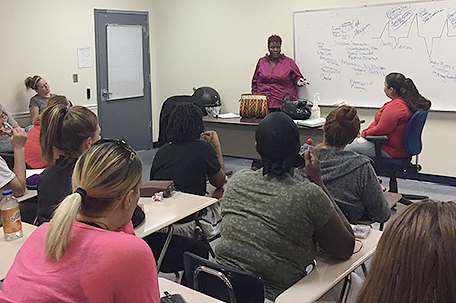 ABOVE PHOTO: Women in classes at Ardella’s House.

According to a February 23, 2019 U.S. News and World Report article which cites the Bureau of Justice Statistics, the national female jail population has swelled dramatically since the year 2000, when about 70,000 women were incarcerated at the mid-year mark. By mid-year 2014, that population had grown to nearly 109,000 women who were locked up in county or municipal jails.

In 2010, Philadelphia’s Tonie Willis — who has dedicated her life’s work to helping women impacted by the criminal justice system in Pennsylvania (with a focus on Philadelphia) — founded Ardella’s House, Inc., a transitional program designed to address their pressing needs. The non-profit organization’s headquarters — which is currently undergoing renovations — is located in North Philadelphia.

According to the official Ardella’s House website, women interested in receiving services from the organization while still incarcerated must be referred by their social worker, 18 years of age or older, 90 days clean and in recovery (if applicable) and open to change. Formerly incarcerated women can be either be referred by their parole/probation officer or by a shelter/transitional facility.

The idea for the nonprofit was actually an outgrowth of assistance Willis provided for a male friend who was returning home after serving 10 ½ years in prison.

“When he came home, he was completely lost, so he asked me [if I] could I help him get himself together,” she said. “There’s things that you and I take for granted, like birth certificates, driver’s licenses; it was things like this that I had to help him get, because he couldn’t find his birth certificate after being gone 10 ½ years.

After helping her friend, he asked her if she could help another friend of his. This gave both of them an idea.

“One day we were talking, and he said, ‘You know, maybe this is your calling.”

“One size doesn’t fit all,” she continued. “That’s what made me start a program [specifically] for women.

As Willis searched for a name for her new organization, thoughts turned to her beloved mother, Ardella Willis, who died in 2009.

“She [Willis’ mother] was so giving,” she said. “As children, we would come home, and there were always strangers in the house. We would always wonder, ‘who was that?’, and then I would say, ‘Don’t worry about who they are – why do they have my clothes on?’ My mother always felt that if you gave, you would get it back 100 times more. So, she was always giving our clothes away, our toys, different things like that.”

The friend who Willis had helped originally during his transition back into the community also knew Ardella Willis well. The answer was clear.

“You’re gonna name this program after your mother, because there was nobody more caring than your mother,” he told Willis.

“My mother saw good in everybody,” she said. “You and I could be talking about someone and tearing them apart, then Mommy would always chime in, and say ‘But what about?…’ He was right to ask me to name the program after her; it is her legacy.”

The greatest need of women once they are released from prison is housing and employment, Willis explained.

Another important issue Willis pointed out that also needs to be addressed is the area of trauma, not just for the women, but for their children as well.

“They are away from their children…some of these women have never been incarcerated before,” she said. “They [the children] have to deal with the trauma of being away from their mother. That’s why reunification is so important. We work very hard on reunification. We have counselors and family therapists.”

One of the things that Ardella’s House takes pride in on the county side is the holiday party they hold once a year up at Riverside Prison.

“The holidays are tough, and you can imagine it’s even more tough if your mother is away from you” Willis said. “We have the whole holiday fixings – turkey, greens, sweet potato pies, all that. We do it because it’s so important for the children to feel that their mother still loves them. Once they leave the prison, we make sure that every child has at least two toys. We tell them it’s from their mother, because it’s so important to keep that bond. It’s like building a house; you need that foundation — the mother needs the foundation, and the children need the foundation.”

Ardella’s House is currently being renovated; Willis is hoping to have the building ready by early summer. The house will be home to six single women without children, although housing families is one of Willis’ long term goals.

PEER to PEER mentoring is key

Ardella’s House pairs each formerly incarcerated woman with at least two female mentors; one of the mentors needs to have experienced incarceration herself at some point in her life, the other, a successful business owner.

“We find women who have been successful with their transition back into the community that are working or have gone back to school,” Willis said. “We also try to pair them with a woman that’s in some type of business to motivate them. We always try to pair them with women who are going to help lift the bar for them, to help them want more in life.”

It is important for one of the mentors to be a formerly incarcerated woman, because they have firsthand knowledge of what their mentees are up against, Willis explained.

Ardella’s House also provides guidance to mothers who are easing back into their formal role as a parent through parenting classes and family reunification services. Sometimes it is a shock to the system, especially for those who have been incarcerated more than once.

“A lot of times, the [incarcerated] women are talking about, ‘I can’t wait to get home – I want to see my kids.’” Willis said. “But they have to understand that some of the kids are bitter, because they don’t understand why you keep doing what you’re doing, and why you keep becoming incarcerated. You miss proms, you miss graduations, you miss Grandmom’s funeral – You miss a lot of things that are important.”

The Dignity for Incarcerated Women campaign

In addition to her role at Ardella’s House, Willis is also the Pennsylvania ambassador for the Dignity Act via Van Jones’s #cut 50 organization’s Dignity for Incarcerated Women campaign.

According to the official #cut50 website, the Dignity Campaign — led by women who have lived in prisons and know the conditions firsthand, is empowering other women to share their stories, and is working with state legislators with the goal of changing laws in 20 states by 2020.

Among the several practices that they are seeking to outlaw is the shackling of female prisoners during the labor and childbirth process. Another seeks to ensure that the inmates have adequate personal care products — up to and including tampons and sanitary napkins — as needed. Currently, in Pennsylvania’s prison system, inmates have to purchase these items from the commissary.

“How can you tell me how many pads I need, or how many tampons I need?” Willis asked rhetorically. “You don’t know how my body works.”

She is currently working with state lawmakers and formerly incarcerated women to broaden the legislation’s focus.

“In Pennsylvania, it’s going to be all the way across the board – federal, state and county,” Willis said.

Ardella’s House will be participating in Philadelphia’s Day of Empathy event being held at City Hall from 3pm – 6pm in Room 401. At the event, participants will share the stories and experiences of those impacted by the criminal justice system while discussing justice reform and life without parole with legislators. The Day of Empathy is a national day of action to generate empathy on a massive scale for Americans impacted by the criminal justice system.

Ardella’s House distributes “dignity bags” containing basic personal care items to the women they serve upon their release from prison.

“For a lot of women, once they come out of that door, they’re coming out the door with nothing – no clothes, no toiletries; only a few are blessed to have a family to surround them with love and to give them that support when they come home, so those toiletries are very important to them.”

Fundraising is an ongoing process throughout the year for Ardella’s House. Although money is needed year round, a special focus is the current renovation process. Willis appreciates donors, both large and small.

In addition to cash, there is also a need for the following:

New or gently used clothing (all sizes are welcome; however, any donated undergarments must be new)

New or refurbished computers or tablets

All donations are tax-deductible.

For more information about Ardella’s House and to donate, call: or visit: www.ardellashouse.com. For information about the Dignity for Incarcerated Women campaign, call visit: www.cut50.org/dignity. To sign up for the Day of Empathy event, visit: www.eventbrite.com/e/day-of-empathy-philly-registration.