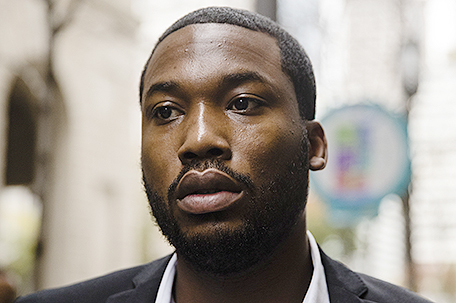 PHILADELPHIA (AP) — Meek Mill’s lawyers will get a chance to argue the rapper’s 2008 conviction on gun and drug charges should be overturned.

Pennsylvania Superior Court granted Mill a hearing in his long-running appeal, his legal team announced Tuesday. Arguments are scheduled for July 16 in Philadelphia.

Mill has been trying to get his conviction overturned because of questions about the credibility of the arresting officer.

Mill, whose real name is Robert Rihmeek Williams, became a symbol for criminal justice reform after a Philadelphia judge sentenced him in 2017 to two to four years in prison for minor probation violations. He spent months in prison before a court ordered him released in April of last year.

The rapper has attracted support from a string of high-powered figures and celebrities, and he was a fixture at 76ers playoff games this spring.

Last month, Philadelphia’s top prosecutor called for a new trial and judge for Mill, saying Common Pleas Judge Genece Brinkley abused her discretion and has been biased against him. Brinkley, who denied Mill’s bid for a new trial last year, has rejected accusations of bias and refused calls to remove herself from the case.

“We’re looking forward to the oral argument before the Superior Court of Pennsylvania and to, hopefully, having Meek’s conviction vacated,” Jordan Siev, Mill’s lawyer, said in a statement. “In light of the district attorney’s recent filing, where he supports the granting of a new trial to Meek and the recusal of Judge Brinkley, we hope to have this injustice rectified once and for all.”