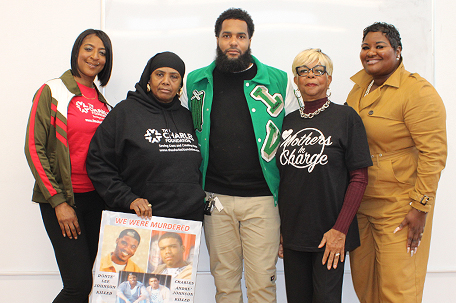 A call to action has been issued on behalf of  hundreds of families in Philadelphia who have lost children and parents to gun violence. Residents and anti-gun violence activists are fed up with being under siege by this disturbing trend every day.

There have been about 100 homicides in the city this year so far. This is why anti-gun violence activists are urging residents and community groups to be a part of the healing process.

Organizers are spearheading the Anti-Gun Violence Day of Serenity and Healing event at The Philadelphia Masjid on Saturday, May 7, 2022, 4700 Wyalusing Avenue, from 9am to 6pm. Featured activities will include healing sessions, a citywide candlelight vigil, Universal Interfaith Prayer, a community basketball game with the police and a carnival for the children.

Dorothy Johnson-Speight, founder and national executive director of Mothers In Charge, Inc. (MIC) spoke about her enduring experience with gun violence in Philadelphia from a mother’s perspective. Her son was killed over a parking space.

“What Tone, and [all of] us are trying do will encourage everybody to get involved,” and I’m hoping that this Serenity Day will bring people together to know that we’ve got to be the ones to change what is happening in our community,” she said. “This has to be the change we want to see.”

The main focus of this event is to reach out to those who are feeling being broken, shaken, disheartened, angry and devastated after a loved one has lost their life through gun violence, and support will be there at this interfaith event.

“It’s important that we acknowledge what is going on in our city, and one of the things that we want to do is make sure that we are reaching the families of victims of crime and also trauma,” said Ericka Gaines, director of Communities That Care (CTC). “We understand that trauma is the outlining issue that is going on. We want to bring resources. We want to bring healing.  So, this is one day that we will be able to follow it up with action and to bring more support for violence and resources for people that are victims of trauma in the city of Philadelphia.”

Tanya Leslie-Blake, a dialysis technician from West Oak Lane who has received victim’s services,  tragically lost her son and her husband to gun violence. She spoke about how she’s coping with the devastation.

“Well, it started for me back in 2005 when my husband was murdered,” she said..  “MIC wasn’t around at that time, but, a few years later, in 2008, they were able to come out and support me and talk with me through the process. But, after that, I pretty much buried myself into my work to cope with the loss of my family members. My son’s death was, like, the worst thing that could have happened to me. I still go through it every day. It’s not a day that goes by that I don’t feel it. I just learn to live with it. But it’s always like yesterday when I sit and elaborate on what happened to him. I’m off on May 7th and I will definitely be out there.”

One of the supporters of the event, Councilmember Jamie Gauthier, had the unfortunate experience of seeing the gun violence in her district first-hand. After attending an awards banquet in Mantua with DeWayne Drummond, president of the Mantua Civic Association, while walking her to her car, gunshots rang out near where she was parked at the corner of 38th and Fairmount Avenue.

“I thought we were [going to] die,” said Gauthier. “We both jumped in my car and ducked to get low as we can and just wait out the shooting. But, I thought that a bullet would come through the car and kill us, and I was just praying.”

Anti-gun violence activist Movita Johnson-Harrell — who created the CHARLES Foundation after the loss of her two sons from gun violence— talked about the anti-violence mobile T-shirt  exhibit that travels around to different churches and religious organizations which began in 2016.

“We wanted to do something to bring awareness to the community to represent the victims,” she said. “So, we get a list of names of victims who were killed by gun violence and we mark up the shirts with their names, ages and the dates of death of gun violence victims, and it’s been very impactful.”

These tragedies are occurring  at an alarming rate in our neighborhoods and residents need answers.

“Mothers In Charge is on the front lines,” Johnson-Speight said. “We’re doing something every day. The Charles Foundation is out there. Everybody knows that organizations that are out there are not being supported, number one, and there are a lot of people we could be helping do what we’re trying to do, but they’re not. They’re home, watching it on the news.”

Police districts in Philadelphia are overwhelmed by this crisis that is seriously affecting Black and brown communities where our young people are dying, and individual groups and people protesting these actions to curtail this epidemic don’t possess the protective gear to directly address people with guns.

The fear of retaliation is another issue for residents who have come forward to report these crimes.  Some feel that their lives are in danger the moment they decide to get involved in the process to curtail this type of crime in their neighborhoods.

To contact the organizations for assistance or to get more information, call: