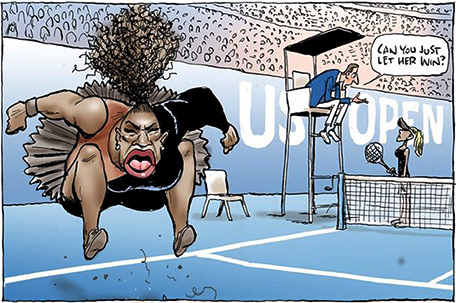 Through Mark Knight’s editorial cartoon of Serena Williams, we all got an education of just how far we haven’t come.

What I love most about being a journalist is that you’re always learning something.

Whether what you learn is good, productive or life affirming or not, it’s something that you’ve picked up in your travels that you can’t unlearn. You might want to, but you can’t.

This week’s lessons came from a cartoon that Mark Knight, a editorial cartoonist for the Herald Sun in Melbourne, Australia did depicting the U.S. Open Women’s championship match between tennis icon Serena Williams and Naomi Osaka, the new U.S. Open champ whose game represents the future.

The lessons: racism is international and is practiced in the same clueless, absolutely ridiculous way everywhere.

For those of you who have managed to avoid the news this week, the U.S. Open match between Williams and Osaka managed to be memorable for all the wrong reasons. After Williams was given a warning by umpire Carlos Ramos for being “coached” from the stands, she broke her racket in frustration, and later demanded an apology from Ramos for accusing her of cheating.

By the time that it was all said and done, Williams was first given a warning, then penalized a point, and finally penalized a game. She eventually lost the second set and the match by a score of 6-4.

Now having been a woman for the last 54 years, and a Black woman for 100 percent of that time, I knew how Williams and her anger was going to be portrayed in the media. The word “outburst” was on almost every front page story connected to it because the rules are different for women, whether folks want to admit it or not.

That’s because one, women aren’t allowed to get mad. And if they get mad, they’re not supposed to yell. And if they do get mad and they do yell, they’d better not yell at a man.

Two, because most of the sports media is made up of men, the incident that made Williams angry was going to get minimized because it’s easier to paint a woman as an emotional, hormonal mess (and yes, someone did write that it seemed as if Williams’s hormones were out of whack) than it is to acknowledge that men have done and said worse to referees in tennis matches and I know this because I grew up watching John McEnroe and Ilie Nastase.

(They didn’t call dude “Nasty” for nothing.)

And three, if you’re a woman, and you’re mad, and you express that anger, and you just happen to be a Black woman named Serena Williams who is widely acknowledged as one of the best athletes of all time and who proved that by having the nerve to win her last major championship while being three months pregnant, you just might as well prepare for the wrath.

Enter Knight and his “masterpiece”.

If you haven’t seen this piece of “art”, it’s a real humdinger, I assure you. It depicts Williams having a full-on temper tantrum as umpire Ramos sits on his lofty perch and asks Osaka, “Can’t you just let her win?”

Because I knew that we were going to get Angry Black Woman all day, I expected the cartoon, it’s Hottentot Venus vibe, and all of the “othering” that accompanies such things.

But figuring out where to start an analysis of such a messy thing took a minute.

So let’s start with the obvious: how Serena Williams gets presented here.

During the Obama Era, or as some like to call it, When America Wasn’t Crazytown, President Barack Obama and First Lady Michelle were the subject of some really nasty editorial cartoons. of the most heinous cartoons from people who fancied themselves news cartoonists. They were drawn in ways that served as racist dog whistles to the current cabal of White Nationalists currently running the US.

They were often drawn as monkeys. President Obama occasionally found himself with a noose around his neck. And the First Lady, due to her belief in physical fitness and the fact that she had arms that are still the envy of most of the women I know, would occasionally be drawn with an appendage women don’t have.

(For those of you who need that spelled out a little better, I’m saying that people would draw editorial cartoons that included the First Lady with a penis.)

The caricature of Serena, another physically fit woman with a body that makes many of us feel inadequate in comparison, featured oversized lips and buttocks, a pacifier (no, I’m not kidding) and a skirt that might remind some of the banana skirt worn by the late Josephine Baker, proving that the best dog whistles are the old dog whistles.

In a statement released on Monday, the National Association of Black Journalists and NABJ’s Sports Task Force denounced the cartoon, calling it “Sambo-like” and saying that it was a gross depiction of two women of color at the pinnacle of their game.

They were being nice. To me, it was yet another example, as if we needed one, of how this current international wave of White Nationalism seems to have empowered people to completely show off, and with that bring back racist tropes that were in their vanguard prior to World War II.

In a move that can only be described as tone deaf, Knight and the Herald Sun doubled down, saying that “the world’s gone crazy” and that the folks in Australia aren’t that sensitive when it comes to racism.

All that told me was that he didn’t hang around Australia’s Native Peoples much. After he got dragged on Twitter after that statement, Knight deleted his account.

But while the problematic way that Williams was treated in this cartoon was easy to spot, I was almost equally as angry with how Osaka got portrayed here.

Sure, it took a minute to notice. But once you saw it, it was kind of hard to miss.

You see, Naomi Osaka and her personal identity were basically erased in this cartoon.

While the US Open coverage focused on her being the first Japanese player to win a major, that’s only half her story. The other half is that she’s also the first Haitian to win a major, something that Osaka had to remind folks of during her post-match press conference at the Open.

Despite being a deep golden brown throughout the tournament, Osaka was portrayed in this cartoon as a petite blonde girl with a light skin tone, essentially erasing both of her nationalities in favor of giving her one with which she doesn’t identify.

You’ve got to hand it to Knight. It takes real work to pull off a racist two-fer like this one.

But in a way, the media that allows folks like him to run around ignorant is equally to blame.

As I said at the beginning of this piece, I’ve learned that racism is international and that there are a lot of men out there who don’t like women. With this cartoon, we got to see what happens when the media landscape has so little diversity that editors allow something like this to go out unchecked.

Hopefully, it’ll serve as a lesson to us.

On movies, bold action and why Zoe Saldana shouldn’t play Nina Simone or How I learned to appreciate the lesson of T.D. Jakes even if I’m not a big fan