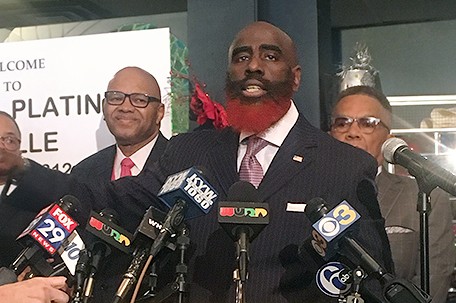 On Monday, Tariq El-Shabazz became the sixth Democrat to declare his candidacy for District Attorney.

If you’re a regular listener to 900 AM WURD, you had an idea that Tariq El-Shabazz was to run for District Attorney.

El-Shabazz spent much of the weekend calling into various shows on the Black talk radio station and coming right to the edge of announcing his candidacy.

On Monday, El-Shabazz ended the speculation.

“First, let me share with you the worst kept secret in Philadelphia,” he said. “I’m running for District Attorney…”

El-Shabazz, who until last week was the first assistant to embattled District Attorney Seth Williams, became the sixth person to throw his hat into the ring for the Democratic nomination for the office.

Earlier this month, Williams, bogged down by ethics violations and an FBI investigation into his personal finances, announced that he wouldn’t be seeking re-election to the office he’s held for two terms.

El-Shabazz made his announcement at a news conference at Chestnut Hill’s Platinum Grille that was contentious at times.

Flanked by a group of his supporters, El-Shabazz told the gathered audience that his experience on both sides of the legal aisle, experience that included two stints at the DA’s office and work as a defense attorney, makes him the best person for the job.

If he wins the office, El Shabazz promised to expand the number of diversionary programs and eliminate cash bail non-violent offenders, and to lead a charge from law enforcement and elected officials to reform Pennsylvania’s probation and parole system.

Unlike his opponents for the Democratic nomination for DA in the May 16 primary, he’s got a concrete plan, El Shabazz said.

“These are real and meaningful ideas,” El Shabazz said, “Not the lip service from those who do not really get it, but just want an office.”

Among those who echoed that sentiment was Sam Staten Jr., Business Manager for Laborers Local 332. “The city needs a champion like El-Shabazz,” he said.

“He’s a person who cares about the city’s people and neighborhoods,” Staten said. “He’s not perfect and we all make mistakes. He believes in second chances and wants to bring the city’s fathers home from jail to raise their children. He has my 100 percent support.”

Another person who came out in support of El-Shabazz was the Rev. Alyn Waller, senior pastor of Enon Baptist Church. He was there as a private citizen and a friend of El-Shabazz’s, not as a representative of the church, he said.

When it comes to the city’s law enforcement issues, particularly at the District Attorney’s office, the community is at a crossroads, Waller said. El-Shabazz is the person to take the city down the right road, he said.

Waller also addressed what he called the elephant in the room, namely that El-Shabazz is a Muslim. While Philadelphia does have Muslim elected officials, such as Councilman Curtis Jones, running for a councilmanic district is different that running a city-wide race, which District Attorney is. That shouldn’t be used as a litmus test, Waller said.

“It shouldn’t be about religion, he said. “It should be about character, professionalism and commitment to the craft. Philadelphia needs someone who will fight for justice. My friend is the best person for the job.”

When the floor opened up to questions, many of them centered on the challenges that El-Shabazz faces that aren’t connected to his religion.

There’s $190,172 in tax liens that include $137,187 in federal taxes, a nearly $60,000 City tax lien, and charges against his former law firm. The blog Philadelinquency, which is run by a former Republican candidate for sheriff, published a post last Sunday that talked about a protection from abuse order filed against El-Shabazz and his wife in Montgomery County.

And then there’s his connection to Williams, who gave El-Shabazz a job in the District Attorney’s office when his law firm closed.

One question, the question of whether or not El Shabazz owed Philadelphians an explanation regarding his debt, combined both of those things.

While he didn’t throw Williams completely under the bus, El-Shabazz did distance himself a little.

“Let me answer it this way,” he said. “Please do not try to put spillage on Tariq Karim El Shabazz by the failures of Seth Williams. I think the voters deserve to know that I have debt, that I have in fact entered into agreements to handle that debt, and that I will handle that debt. I’m not running from this issue.”

El-Shabazz is the lone Black candidate in the race. But he won’t be able to count on the Black community coming out on his behalf as a cohesive unit. Some have already expressed support for Rich Negrin, one of Mayor Michael Nutter’s Deputy Mayors and others for Lawrence Krasner, the lawyer who successfully defended Black Lives Matter protestors and has defended many victims of police brutality.

Others who have currently declared their intentions to run for the Democratic nomination for District Attorney are Judge Theresa Clark Deni, former federal prosecutor Joe Khan, and former assistant District Attorney Michael Untermeyer.

The lone Republican who has declared for the May Primary is former District Attorney Beth Grossman.

Voters will go to the polls on May 16 for the Pennsylvania primary.