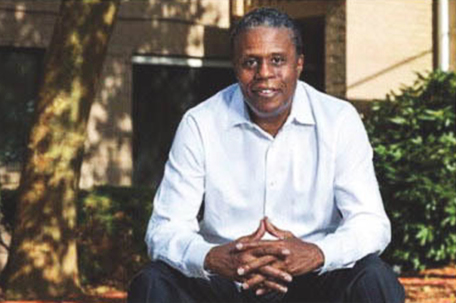 I want to say, “Say it ain’t so.” Dynamic, wonderful, kind, very proud Afrocentric Black man, Earl Harvey, publisher of Black Professional News is not dead. I didn’t want to believe it when our publisher Sherri Darden informed the staff of the SCOOP USA Media newspaper that Earl Harvey had made transition.

Monday, October 12, 2020, Earl became sick. He knew something was wrong. He was home at the time without another driver in the house so he decided to drive himself to the hospital to get checked out. After arriving at the hospital, Earl Harvey had a massive heart attack.

The news of his passing began to spread by word of mouth, via phone calls, and certainly on social media. Once his passing was confirmed, the mourning over his loss began. Tributes have been pouring onto the pages of Facebook and Instagram. Many hearts are heavy at the thought that the world must go on without Earl Harvey, our shining star who advocated loudly and often for Black-owned businesses.

Despite the fact that the SCOOP USA Newspaper, the Neighborhood Leader, the Philadelphia Sunday SUN, and the West Side Weekly — all Black-owned community newspapers — were already in existence, Harvey was unafraid to step out on faith and start another newspaper for the metropolitan area. A very popular individual in his own right, Earl Harvey, with hard work, determination and smarts, created a nice niche for himself and his brand of newspaper, which was distributed all around Philadelphia, in Camden, and downtat the Jersey shore, which he loved so much.

Johann Calhoun, former editor-in-chief at the Philadelphia Tribune Newspaper stated, “This is such sad news about Earl Harvey. Earl won the Community of Service Award my last year as PABJ president and always believed in promoting and supporting Black businesses and non-profits in Philly. Huge loss for the community. Ashe.”

Darisha Parker, Democratic nominee to take the seat of PA State Representative Rosita C. Youngblood, worked in public relations for many years prior to entering politics. She says she knew Earl Harvey well and that he was a joy to work with.

“Our hearts and prayers are with Earl Harvey’s family and friends. I’ve known him for years. He always supported and encouraged Black-owned businesses to support iBuyBlackPhila B2B Group.”

Earl Harvey studied media and communications at Temple University. Black Professionals News was his first “print baby,” however, he went on to become the publisher of The Atlantic City Times in 2015. Harvey was known as an ardent proponent of Black business and worked to build social capital within the local Black professional community.

On a personal note –throughout this pandemic, Earl Harvey and I have stayed in close contact via phone calls, texts, and emails. My goal was to do whatever I could to assist small business owners along the North 22nd Street business corridor. Like so many other business districts, they were hard hit when forced to shut down to stay safe from COVID-19. Being closed, they were losing thousands of dollars every day. I wanted to be able to assist these small business owners by sharing all grant and loan information that was coming my way via the City of Philadelphia Commerce Department, The Beech Company, the Enterprise Center, and a few other sources.

Over the last number of months, I often felt discouraged because as much as I sincerely want to help small business owners from the North 22nd Street corridor, in particular, a lot of them that were applying for assistance were being denied for one reason or another. I would cry on Earl Harvey’s shoulder, so to speak, and he kept encouraging me.

“Thera, don’t give up the fight,” Earl said. “Keep trying to help our business owners get assistance. If they get denied, strongly encourage them to fix whatever the reasons were that they were denied from getting a grant or a loan. You are the glue helping to hold business owners together along the North 22nd Street business corridor. Thera, you can’t give up.”

It was strong words like that from Earl Harvey to me that kept me going, trying to assist my small business owners to this day. For six years, up until mid-April of 2018, I was the North 22nd Street Business corridor manager. Even after I resigned from my position and moved away from Pennsylvania, I remained in contact with many of the business owners who shared cell phone numbers and email addresses with me. It was as if I never stopped working in the position as the business corridor manager.

Once the pandemic hit, I knew I definitely would not stop being concerned about my business owners. Earl played a large part in boosting me, so I could boost our businesses. Along with the late Heshimu Jaramogi, Earl Harvey also guided me through how to start a community newspaper; how to find qualified African American newspaper layout people, and where to take the newspaper to get it printed. It was these two brothers, both now dead, who did that for me as I started a quarterly community newspaper for the Allegheny West neighborhood of North Philadelphia. It’s not my paper. I do not own it. It is owned by the Allegheny West Foundation and only publishes four times a year. But because of the guidance offered by Earl Harvey and Heshimu, the Allegheny West Neighborhood Newspaper became a reality in 2013 and still exists today.

“I cannot express the void that this loss will have on his family, friends and the community, Sherri Darden, publisher of the SCOOP USA Media Community Newspaper said. “I have not known Earl Harvey for many years, but I am thankful for the opportunity to know and come to love Earl for the person that he was. I know that Mr. Driver respected Earl and even had spoken with him about continuing Scoop. That information alone let me know that Earl was a good person and was respected.”

“In addition, Earl was the one publisher that everyone told me I should follow,”she continued. “I was told that he was everywhere and attended many events and I should adopt that strategy. When I finally met Earl, he spoke quickly and said, I want to talk to you so I can teach you how to be a publisher. Unfortunately, we never got to spend that time as teacher and student, but whenever there was an opportunity to support Scoop, Earl would call and/email. He will be missed. We send our prayers for peace and guidance to his family and close friends.”

“We didn’t see this one coming, not at all,” Catherine Hicks, publisher of the Philadelphia Sunday SUN, said. “Earl looked like the picture of perfect health. The last time I spoke with him was about two weeks ago and he was fine. He was busy talking about his 2020 Buy Black campaign, an initiative he’s been spearheading for years. He had a great passion for helping small Black owned businesses being successful. Earl will be greatly missed. When the founder of the Sunday SUN  passed, (J. Whyatt Mondesire), I was devastated. Earl was one of the people who came to me to offer sincere condolences and encourage me that I could keep the Sunday SUN alive, along with Jerry’s son, Joey Mondesire. Earl was definitely there for me. Period.”

Tyree Johnson, publisher of the West Side Weekly newspaper shared this memory.

“Earl and I first met in the 1980s. He and I would talk every now and then about the challenges of owning a newspaper, staying relevant, and how to juggle all that a publisher of a small newspaper has to deal with.” Johnson recalled. “We would always discuss getting together for a meal up at the Platinum Grille in Chestnut Hill, but we never actually did that. He was just always so dag-gone busy.”

“We’ve lost so many of our African American newspaper publishers in recent years,” he continued. “We lost Sonny Driver from the SCOOP. Glad to see Sherri still keeping the SCOOP alive. We lost Fletcher Lone, who owned and published the Nite Scene Newspaper for many years. We lost Heshimu Jaramogi, publisher of Neighborhood Leader. We lost Jerry Mondesire, founder and publisher of the Sunday SUN. He and I were very close, and I miss him so much. I’m glad to see The SUN newspaper still publishing. And now Earl Harvey.”

Earl Harvey will always be remembered as an innovator who always fought for small businesses.

Earl Harvey, publisher of the Black Professionals News passes away, 65

Oct. 29, 30: Services for Earl Harvey, CEO and Publisher of the Black Professionals News