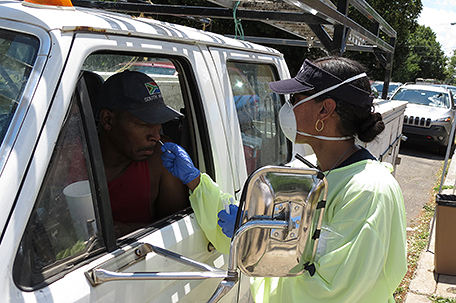 ABOVE PHOTO: Client being tested at Annex West Health Center.

The Mantua community has received the best community gift it could during this COVID-19 pandemic;  a virus testing event. The event  resulted in 155 residents being tested.

Mantua is one of those neighborhoods in West Philadelphia that is going through gentrification, yet is still one of the most impoverished neighborhoods in the city. So, they can easily be forgotten during this pandemic time with COVID-19 spreading through communities undetected and people not getting tested to reduce the spread in their community.

“We’ve been around for 28 years now,” Laquesha Garland, director of the Annex West Health Center, 3990 W. Filbert Street (north of 40th & Market Street) said. “We started out at the Abbottsford Homes community over in the East Falls section of the city. We have a team that is mobile and is available and we have testing sites across the city. We have provided 3,000 tests citywide and was awarded a grant from the City to provide more testing to venture into communities [in] need of testing. ”

The testing event in Mantua took place on  June 26 at the Church of Faith, located at 772 N. 38th Street. This was the first and only testing event  in the community. The only requirement was to have ID for the free test.

“Through the Mantua Civic Association, we were selected because our church is very active in the community,” Bishop Claude R. Barnes, senior pastor of the church, said.  “So, they asked me, would I be willing to host this affair for them, and I told them [yes],  because I realized that this is a problem in the African American community and that they are not aware of the fact that they are prone to this disease and [that] it’s higher in African Americans than any place else.”

Annex West Health Center knew their presence would benefit the community in many ways as a partner with a meaningful purpose that would be beneficial to the community, the health care community and the residents of Mantua.

“We knew that in order for us to be successful and to inform our service clients and servicing residents,” . Garland added. “We needed to establish partnerships with community members. So, we did a lot of community engagement work with the Mantua Civic Association and (MCA) had been very, very supportive of our efforts. So, it was a wonderful, wonderful thing.”

Community leaders in Mantua are passionate people who find solutions for their community and work hard to resolve many of the issues that residents live through and face everyday. The partnership with the Annex West Health Center was a great match.

“The importance of having the testing done in Mantua is that people in our community don’t have the greatest chance (to get tested) unless they go to the doctors,” Mrs. Sam, “Mother of Mantua” and member of the Mantua Civic Association, said “So, we decided to bring the test to them.”

One of the main reasons to locate a testing site in Mantua was to reduce the misconception that residents didn’t want the testing. Mantua is part of the 19104 zip code in West Philadelphia that is still one of the “hotspots” on the city’s zip code map of where the coronavirus had been spreading.

“I think it’s very important for us to have the testing as African Americans,” Mantua resident Gail Coates said. “So many of us have been affected and we can affect our families. I think we need to make absolutely sure whether we’re having any symptoms or not, so that we’re not affected by this disease. Because we’re dying in very high numbers from it.”

The issue that has been of great concern for Mantua residents was that in addition to the fact that residents were not being tested for  COVID-19, they had concerns about the testing process itself. However, due to constant improvements with testing, the staff at the Annex West Health Center were able to use the smaller Q-tip for their test and could answer questions from residents to reduce their anxiety and fears about the process.

“I took the test,” says Mrs. Rosen, a senior and member of the Church of Faith. “Because my church [was] doing the test here and I decided before I come to church, that I would be tested.

If the numbers are good for people coming out to be tested here, there may be another date and time scheduled for more testing in the very near future, Garland said.

“So, we want to do our due diligence and support what the [community] leaders of Mantua are asking for,” she said. “We want COVID testing here. We want accessible testing here in our community.”

“We really look to make the case to prefer to work with the vulnerable communities and you know, many of our patients that we service do not have insurance,,and we will work with them to get insurance,” Garland concluded. “With the Mantua Civic Association being the eyes and the ears of the community, it was a smooth transition to partner with them.”

Mantua has a great Registered Community Organization (RCO) and through the years, the organization has been a very visible force in the community and has stable leadership with DeWayne Drummond, Gwen Morris and “Sam” Samuel  — the new “Mother of Mantua” — playing  pivotal roles.

They have a defined vision and purpose in Mantua as it relates to its community’s motto: “Plan or be Planned For.” Today, Mantua planned with a preventive purpose with the Annex West Health Center.