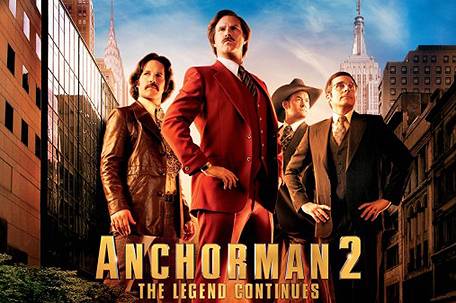 Ever so often, a movie comes along that changes the way we view film.  Some films shock us  with unexpectedly jarring endings, some films give us a profound outlook on life, some films visually allow us to push the limits of what’s possible with technology, and some films we love simply because they make us happy.  I will never forget the first time I saw Anchorman: The Legend of Ron Burgundy. The year 2004… the setting, Cabrini College.

A group of friends invited me over for movie night. I arrived, sat down on the floor with a pillow behind me, and witnessed one of the funniest movies I had ever seen! I remember tears streaming down my face from non stop, gut punching laughter! I went out and bought the DVD later that week. If I was having a bad day I’d put on Anchorman, laugh and feel better. I went around quoting lines from the movie for the rest of the year.

On this second go-round the former Channel 4 news team reunites to break down barriers at the very first 24 hour news station. Insanity ensues when Ron decides, “Why can’t the news be fun?”  From there random madness explodes on screen with sharks, scorpions, Minotars, fried bat wings, green screen mishaps, ghosts, and some of the best cameos in a movie to date.  Watching the film I couldn’t help but wonder, “How do they come up with this stuff?” So after sitting down with Anchorman 2’s director/writer Adam McKay, we get the answers to that question and more.

McKay shared the story behind Anchorman. “Part of it was [Will] Ferrell had seen a documentary about Jessica Savage, the first female anchor, and Mort Crim, the legendary Philly anchor was in it… that’s kind of what sparked it.” McKay said.  “We were just laughing at this guy (Crim) who sounds so legitimate and wise just being a sh**. “Like I’ll be honest we were male chauvinist pigs, we did not treat that little lady very well.” (McKay said imitating Crim).  I liked that he was still calling her little lady. And yet, God bless him, he’s coping to it, and acknowledging that it wasn’t good behavior. I’m sure he’s a great guy, but that contradiction was just so funny to us.”

McKay went on to say, “Then we started thinking… No one has done anything on the newsroom in a long time!  That style, that kind of world is such an old world aesthetic. Even the anchors today feel like they’re from 1977 or something.  They just all feel old no matter what, there’s such a stayed kind of bizarre style to it.”

The funniest part of the backstory behind Anchorman McKay shared was the stories he heard from friends; “We started hearing stories from friends of ours like, “Oh yeah I grew up in Pittsburgh, and I remember all the anchors would go to this friend of mine’s house, and they would get drunk and swim in their underwear.” I was like WHAT?!! “Yeah all these people you respected as a kid would get hammered, and be in bras and boxers just making out and drinking.”

I wholeheartedly hope that Adam McKay and Will Ferrell continue to make comedic magic together on the big screen.  The studio took notice, and released the film two days earlier than originally slated.  Anchorman 2: The Legend Continues  is now running in theatres nationwide.

¡VOZ! Congreso Continues with Latino in America with Soledad O’Brien, May 4

Free Film Series continues at UU Church of the Restoration