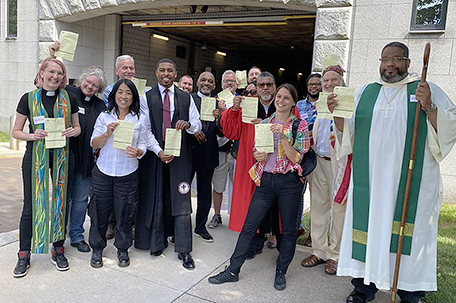 ABOVE PHOTO: Members of POWER Interfaith and Councilmember Helen Gym (pictured front, third from left) pose for a group photo after being detained and released after protesting outside of Pa. state budget meetings last week in Harrisburg.  (Photo/Lilah Saber)

Much to the chagrin of many, Pennsylvania’s 2022 fiscal year budget leaves $5 billion in American Rescue Plan funds just sitting around.

At one time or another, everyone has talked about what they’d do if they suddenly came into a large sum of money.

From building a grand new home to possibly starting a charity, most of us have a plan of what we’d do if we ever came into the kind of money that could change your life.

Through $7 billion in American Rescue Plan funds, and a record $3 billion  surplus, the Commonwealth of Pennsylvania came into $10 billion, money that many felt could change the lives of lots of residents through more school funding, cash for infrastructure, and economic development.

But to many, the $40 billion plan passed by the Pennsylvania Legislature that Gov. Tom Wolf signed into law on Wednesday is an opportunity lost.

It’s a budget that can help those most impacted by the COVID-19 pandemic get back on their feet, according to the Republican leaders that put it together.

“The budget offers a blueprint to help our Commonwealth chart a better path forward,” said Sen. Jake Corman (R- 34th Dist.), Senate President pro tempore. “The past year and a half was extremely difficult for many Pennsylvania families and employers. In light of these difficult circumstances, I am thankful that we were able to pass a fiscally responsible budget that helps us tackle the immediate needs created by the pandemic as well as the financial challenges that lie ahead.”

But one man’s “fiscally responsible” is another’s “cheap and short-sighted.”

While some of the $10 billion was used in the budget, $5 billion was kept off to the side. In a commonwealth dealing with poverty, unemployment, and a lack of access to broadband in rural counties, that’s irresponsible, Democratic State Rep. Jordan Harris (D-186th Dist.) said.

“Make no mistake, there was more good to be done,” said Harris, the House Democratic Whip. “While this budget represents incremental steps forward on good funding initiatives, we can’t ignore the fact that it also represents a tremendous disservice to millions of Pennsylvanians who could’ve benefited from investing more.”