An Living Icon: West Philadelphia’s Will Smith is immortalized with a mural in his honor 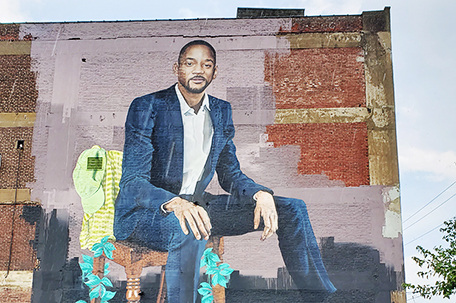 ABOVE PHOTO:  The Will Smith mural by Richard Wilson  (Photo: Leona Dixon)

When you think about ‘Philadelphia royalty’, one name inevitably comes to mind: Will Smith.

The multi-talented rapper, songwriter, comedian, actor, producer, philanthropist and family man has proven to the world that you really can have it all. With a career that spans over 30 years, and unforgettable acting roles in “The Fresh Prince of Bel-Air”, “Ali”, “The Pursuit of Happyness”, “Bad Boys”, “Men In Black”, “Enemy of The State”, “I Am Legend”, “Hitch” and “Focus”,  Smith continues to prove that he is a living icon. The four-time Grammy Award winner, two- time Academy Award nominee, and five-time Golden Globe nominee has shown no signs of slowing down. He continues to blow our minds on the big screen and has managed to take Instagram to new heights, sharing some of the best content on the Web with 19.8 million followers. The work Smith has done over the course of his career continues to serve as an inspiration to generations. Recently, London-based artist Richard Wilson paid homage to Smith in the form of a 65 ft. mural in West Philadelphia. 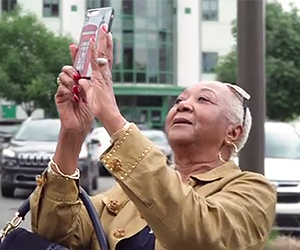 Wilson’s art career began in 1984 with a love for graffiti. A self-taught artist, Wilson felt he best expressed himself through this art form.

He expanded his artistic expression to include murals, crediting artists Belin and Smug as two of his heroes. Wilson shared a glimpse of his journey with art thus far with the SUN recently. 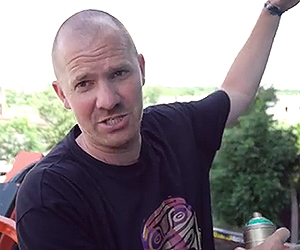 Mural artist Richard Wilson working on the Smith mural on the side of the Urbia Furniture Warehouse at 45th & Girard Avenue. (Photo: Videograb Mural Merch)

“I think sometimes there’s a fine line between when graffiti crosses over into a mural,” Wilson said. “I mean, it’s all just paint on walls in different colors and shapes in my opinion. But probably mural work is usually something that people outside of graffiti artists [or those that appreciate graffiti] understand easier, i.e. a face, or a person, or shapes that can be perceived as ‘art’ rather than graffiti. I just say all that because, I started writing graffiti [painting on walls in 1984] and started doing murals in 2016. I had a 20-year gap in between where I didn’t practice art of any kind.”

Although he took a 20-year hiatus from the arts from 1989 through 2012, his love for creating brought Wilson back to art. He found inspiration in Will Smith. He  spoke about how the mural came to fruition.

“I think I’ve had Will in my head as someone I’d love to paint for a while, but it was really his Insta posts that pushed me more towards doing it,” Wilson said. “Once I had the idea to reference the Kehinde Wiley piece of Barack Obama, I just had to try and find a wall in West Philly. I found the one that I painted using Google Streetview (I’m based in London). I felt like Will is just such an inspiring person and an amazing role model that I’d love to paint him. Like I said, his Insta posts directly inspired me to do this, and also his incredible career so far. Mastering so many of the arts and carrying himself through all of it [is a] lesson to us all.”

The mural that Wilson began on May 19th is located at 45th and Girard Avenue on the side of the Urbia Furniture Warehouse. The wall overlooks Global Leadership Academy School (GLA). The kindergarten through 8th grade elementary school’s staff and students were elated to look up to see daily inspiration in the form of Will Smith. Equally excited about the mural and dedication was  Smith’s family. In a short documentary that  Smith executive produced about the mural, he shared the following:

“When I was coming up, there was this mural of Julius Erving. Dr. J was everything in Philly. I remember how inspired it made me to see him on the wall, and what that did to ignite the fire and desire for elevation. The idea that there would be a mural of me on the side of a school in West Philadelphia just… wrecked me!”

Carolyn Smith, Will’s mother, had a similar reaction in the short documentary when she first saw the mural. “You couldn’t have done any better if you tried” she told Wilson. “It’s perfect… there’s nothing that you left out!”

Ellen Smith, Will’s sister, shared her reaction to the mural via phone.“I was excited becauseWill does so many different things,” she said. “Getting a mural now… this is kind of the icing on the cake. I knew that as huge as this is, there is something else in this man’s soul that’s going to pull something even greater out — I know it!”

Smith’s sister, also shared details about the conversations she had with Wilson regarding the mural. 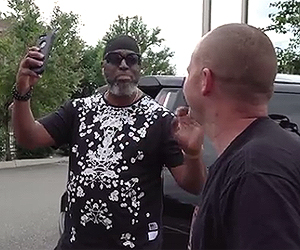 “Richard and I got a chance to talk,”she said. “We follow each other on social media and we talk on the phone sometimes. We talked about how he felt like it was an honor to do the mural for Will. He said it was something he always wanted to do and that he admired Will as both a man and a humanitarian. Richard also said he felt like Will was always a positive impact on the world… that he brings a different kind of energy that other people just don’t. That energy gave him the inspiration to go ahead and create the mural. He said it was one of his greatest achievements.”

Ellen Smith felt a very unique sense of pride, not only from seeing the incredible work of the mural itself, but also from gauging her brother’s reaction.

“Will said, ‘Oh my gosh, this is such a great honor. I never thought anything like this would happen to me.’” It’s so funny because Will is my brother –it’s like he does so many great things, nothing surprises me with him because that’s just who he is,” she said. “When he got the mural, to see his humble reaction… it was exciting for me watching him get that honor.”

Will Smith will undoubtedly continue to inspire Philadelphians and people worldwide through his countless talents and steadfast efforts to give back.  Smith turned the occasion of the mural honor into an opportunity to help the students of Global Leadership Academy School and Richard Wilson. With an initiative dubbed “Mural Merch,” Smith plans to donate 100 percent of its proceeds to the students of Global Leadership Academy Charter School and artist Richard Wilson. The mural merch includes, t-shirts, tank tops, sweatshirts, hoodies, tote bags, pillows, canvases, mugs, iPhone cases and more with the artwork from the mural on them.

To support the cause, visit https://teespring.com/stores/willsmith. Next time you’re in West Philadelphia, look up at the mural and take it as a reminder that anything is possible.