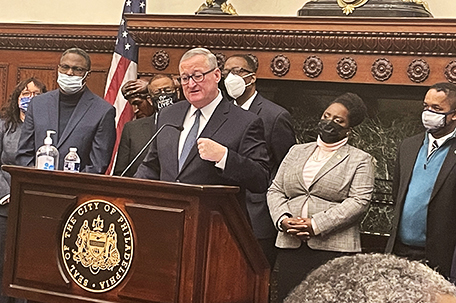 ABOVE PHOTO: Mayor Jim Kenney speaking at Wednesday morning’s news conference at City Hall over the nearly 500 murders in the city this year. (Photo by Denise Clay-Murray)

As the City of Philadelphia approaches a record number of murders, Mayor Jim Kenney joined state, federal, local and community leaders in calling for an end to the violence.

Usually, Darrell Clarke is about as stoic a man as you would expect someone who is the president of Philadelphia City Council to be.

But as he prepared to speak at a news conference called by Mayor Jim Kenney at City Hall on Wednesday, Clarke didn’t look like one of the most powerful men in the city. He looked like a man whose heart was breaking over a problem that was tearing apart his community.

And it was that community, Philadelphia’s Black community, to whom he directed his words.

“At the announcement of the Census, they said that 30,000 Black people had left the city,” Clarke said. “They didn’t leave because of the business taxes or any of the other things that we talk about. They left because they didn’t feel safe. If I get one more call from someone who says, ‘I can’t do this anymore’… I just got one from a friend who said that he had to leave because he’s scared.”

As the City approaches the grim milestone of 500 murders, Kenney gathered state, local and federal law enforcement, community leaders and legislators to the Mayor’s Conversation Room at City Hall to talk about the city’s efforts to stem the tide of violence.

On a day when Kenney would usually hold his bi-weekly violence prevention press briefing for reporters, he, and many of the other speakers, tried to accentuate the positive.

About 6,000 illegal guns have been taken off of the streets, and the shooting rate, which was trending in the 40% range, has now gone down to 13%.

But it could go lower if the Pennsylvania Legislature would stop standing between the City of Philadelphia and its ability to keep citizens safe by allowing the city to tighten its gun laws, Kenney said.

“In Pennsylvania, we have seen unprecedented rates of gun sales,” he said. “The numbers show that the sea of illegal guns that are accessible in the heat of the moment have been turning an argument that could have stayed an argument into a double homicide. We know that common sense regulation of guns would save lives. All we have to do is look across the river to New Jersey and see what happens when you have strong gun laws.”

But when City Councilman Curtis Jones (D-4th Dist.), chair of the body’s public safety committee and other city officials went to Harrisburg, they were met with an indifference that illustrated the neglect that the State Legislature has given to the issue, State Sen. Sharif Street (D-3rdDist.) said.

In his office alone, 75% of the staff has lost someone to gun violence, including Street himself, he said. Meanwhile, the legislature has passed legislation that would further deregulate guns in the Commonwealth.

The Commonwealth needs to get serious about being a part of the solution instead of finding ways to be a part of the problem, Street said.

“The general assembly has been derelict in its duty,” he said. “We have a Pennsylvania problem, and we need a Pennsylvania solution. We must do better.”

While taking illegal guns off of the streets would help tremendously, many Philadelphians believe that holding those who have them and use them to commit acts of gun violence accountable for their actions would help even more. When asked about that, Kenney said that we all have to remember that the criminal justice system didn’t start functioning fully until recently.

“I understand people’s frustrations,” he said. “But we just went through a pandemic and the courts were closed. We’re doing the best we can.”

But while getting Harrisburg to understand that the problem of gun violence in Philadelphia is a commonwealth problem, it’s taken some time to make many Philadelphians realize that it’s a problem in all sections of the city, Police Commissioner Danielle Outlaw said.

Not too long ago, Outlaw said, many people were able to overlook what was going on regarding gun violence because they didn’t recognize the people it was happening to.

But in the end, the people being lost to gun violence will be leaving holes in the hearts of their families and empty seats at holiday tables, Outlaw said. We need to remember them as people.

“These losses go well beyond the homicide or the shooting statistics that people might go out on a regular basis,” she said. “These victims are far more. Their absence has a profound impact on our community. The trauma of loss, which has been and continues to be here, will leave an indelible mark on future generations if we do not address this issue. Now. It’s beyond time that everyone comes together to be the catalyst for change.”

Among the changes that the city has to consider is how to change the socioeconomic dynamics at play here, Councilman Kenyatta Johnson (D-2nd Dist.), chair of Council’s Special Committee on Gun Violence. In order to stop the violence, you have to increase the resources to communities that have gone without for far too long, he said.

But in the end, the problem of gun violence in Philadelphia is going to take a group effort to solve, said Chantay Love, president and Director of the EMIR Hearing Center, another recipient of the city’s anti-violence grant program for community groups.

“We all have to gather and find one solution,” she said. “We’ve got to be in this to win this.”