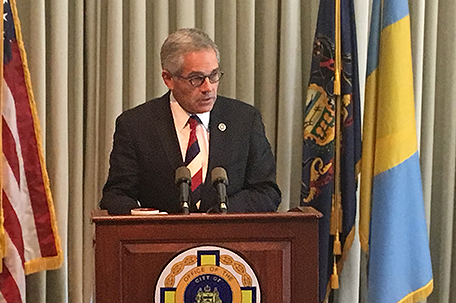 Former Philadelphia Police Officer Ryan Pownall being held without bail on a charge of general murder and related offenses.

Last year, a group of Black Lives Matter activists protested in front of former Philadelphia Police Officer Ryan Pownall’s home in Northeast Philadelphia, demanding that he be charged with the murder of David Jones.

On Tuesday, the activists, and the family of David Jones, got the news they had been waiting for.

District Attorney Larry Krasner indicted Pownall on charges of Criminal Homicide, Recklessly Endangering Another Person and Possession Of An Instrument Of Crime stemming from an unplanned traffic stop that began with the officer stopping Jones on his dirt bike, and ended with Pownall shooting an unarmed Jones in the back.

Pownall turned himself into his former colleagues on Tuesday and was arraigned on the charges. He is currently in custody and his preliminary hearing is scheduled for Sept. 19.

While the indictment doesn’t bring Jones back, news of the arrest was good news to his family, said Isaac Gardner, a member of the Justice 4 David Jones Coalition.

“They were excited,” he said. “They were overwhelmed with joy. Most of his family has moved out of the city. They tried to come back today to express their love and appreciation for everyone that’s stood up for their family. This charge is long overdue. So the family wants to express their appreciation to the District Attorney’s office for stepping up.” 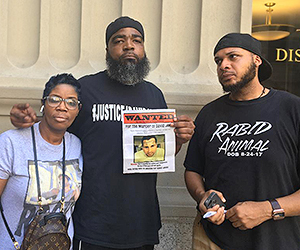 At a news conference held at the District Attorney’s Office in Center City, Krasner announced the charges and said they were necessary because this is everyone’s Commonwealth.

Krasner said that the charges were necessary because this is everyone’s Commonwealth.

The charges against Pownall represent the first charges against a police officer for killing a civilian since Officer Christopher DiPasquale was charged with the murder of Donta Dawson in 2004. Attorney Michael Coard had filed a citizen complaint and forced then-DA Lynne Abraham’s hand. The case was thrown out of court and never went to trial.

That there has been 20 years between such charges despite the number of possible cases of police brutality is the product of a system that allows a lack of accountability on those who should actually be the most accountable, Krasner said.

“Regrettably, this is unusual in the history of the City of Philadelphia,” he said. “That is because this is a city, like many other American cities, where there has not been accountability for activity by police officers in uniform, especially when that activity involves violence against civilians.”

Calling the Pownall indictment “an absurd disgrace”, McNesby, flanked by Pownall’s wife Tina and brother Edward, said in a news conference at Fraternal Order of Police Headquarters in Northeast Philadelphia, that Krasner was on the wrong side of the law here.

“Today’s meritless indictment shows a district attorney who has an anti-law enforcement agenda,” McNesby said. “We stand with Ryan’s wife, Tina, his children, his family and the other officers of the 16th district.”

While the activists in the Justice For David Jones camp were happy to see an indictment, they know that they’re nowhere close to the end of the road.

“Justice for David Jones is not complete today,” Isaac Gardner said. “We appreciate what the DA did today, but it’s not done. We still have a job to do and a conviction is what we need. We need him to get a conviction for what he’s done.”