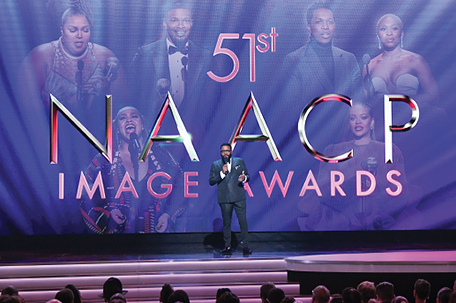 The event was broadcast live on Black Entertainment Television (BET) in a simulcast with CBS from the Pasadena Civic Center Auditorium. and was hosted by Anthony Anderson.

This was the first year that BET broadcasted the event, and the red carpet was resplendent with Hollywood’s Black elite who were there to honor the deserving awardees, as well as being honored for their craft of choice.

It  was the creme de la crème of Black Hollywood!

National NAACP President Derrick Johnson is to be lauded for a job well done by his team, who left no stone unturned from beginning to the end.

Karen Boykin Towns, vice chair of the NAACP  board of directors and  chairperson of the Image Awards, spoke of the importance of not just acknowledging the excellence of Black people, but also used the platform to highlight the 2020 Census, and encouraged people to be counted, so that needed federal dollars will find their way into Black and brown communities across the country.

The NAACP’s National director for youth and college students, Tiffany Dena Loftin, paid tribute through her gorgeous outfit designed by Franklin in memory of Kobe Bryant, whose life was acknowledged during the show.

The stars began arriving promptly at 5 p.m, amidst a serious downpour that did nothing to dampen the excitement that greeted them.

Director Ava DuVernay won for her critically acclaimed documentary “When They See Us,” and Philadelphia native Jill Scott took to the stage to celebrate the 20th anniversary of her album, “Who Is Jill Scott.”

Celebrated actress Angela Bassett was excited to meet Grammy award-winning singer Lizzo, who she spoke of  the performer as being super talented, while Lizzo was visibly awestruck at meeting Bassett, and thrilled about the well deserved compliment. Bassett won an award for her leading role in the television series, “9-1-1” and was a vision in an emerald green gown.

“Just Mercy”  received  four awards, including the top award of the night — “Outstanding Motion Picture” — as well as “Outstanding Actor for Michael B. Jordan,” and “Outstanding Supporting Actor” for Jamie Foxx.

Rhianna won the Presidents Award for her humanitarian efforts and rocked the star studded center with a riveting speech on ‘ally-ship’.

She reminded the attendees that if our White friends want to hang out with us, they need to care about our issues too and “pull up.”

That speech has since reverberated across the internet, and deservedly so.

While there are many award shows between January and March of each year, there is something special about the NAACP image awards.  To quote Jaboukie, a young correspondent for the Daily Show, “What’s not to love about seeing Black excellence everywhere you look on this red carpet?”

One could feel the pride and love the attendees expressed being amongst each other. It was literally one of the few times each year that they are able to let their guards down while shining unapologetically.

They greeted and supported each other,  in ways beyond comparison. To watch Lizzo expressing with absolute joy the need to meet Rhianna in person is almost indescribable. The stars were approachable, and actress Tiffany Haddish was pure comic relief in the media room after winning her award.

All in all, a night to remember!