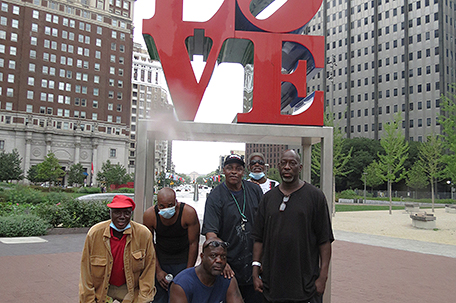 No matter what we do, the question in America remains:, why are Black men continually preyed upon?

“The problem with racism is that the people of the ethnic group that oppress the other often will deny that it exists,” Dr. Harry Edwards, a noted sociologist and consultant for the San Francisco 49ers during the 1980s, said.

For more than 400 years and from generation to generation, African American men have been under attack.

From slavery to Jim Crow and now with the recent and deadly violence against Black men and women, the message is clear;  there is a systemic racial problem in America. Historically,  African Americans  were valued as three-fifths of a human being. Is this their same worth  in 2020?

Fifty-seven years ago, the Rev. Dr. Martin Luther King and others descended upon Washington, D.C.  to protest the same issues that still plague African Americans today. What will it take for this country to recognize the equality of its citizens of color?

“To me, the road to paradise is not changed,” says Ron Bond, a retired Sports Management Administrator. “There have been changes, where it’s kind of like the expressway. I’m saying that life for African Americans in the United States, basically, still exists in its basic form but we’re still dealing with the same issues through our history.”

“I’ve dealt with the issues my parents dealt with,” explains Mr. Bond. “And now, I think my grandkids are gonna have to deal with this thing.”

The horrific treatment and oppression of black men, is one of the most inhumane and scariest encounters that many unsuspecting Black men and others of color has faced in this country recently.

“So, the way justice is weeded out, is not fair and it’s very obvious,” Bond said. “For example, you have a teenage white kid walking down the street with a rifle and you have a Black man trying to get in his car with no rifle, and you still put seven bullets in him. But in the process, he manages to kill two other white individuals and wounds another one.”

“And the church has come to his rescue with $100,000,” Bond continued. “The same Christians could’ve easily raised $10,000 or they should have been able to easily raise $10,000 if they cared for an African American male that has seven bullet holes in him and is probably paralyzed from the waist down. So, they care but they care about their own. And that is basically the same behavior demonstrated by the slave masters. And that’s sad.”

With the deaths of Eric Garner, Trayvon Martin, Freddie Gray, Jr., Michael Brown, Breonna Taylor, George Floyd, and many others, America continues to justify and defend rogue police officers without some prosecutions.

Recently, a video showed a white police officer in Kenosha, Wisconsin  walking back to the car with Jacob Blake, then  shoot the unarmed man seven times in the back. The police are now trying to justify the shooting, stating that he had a knife on the floor under his driver’s side seat. Blake is now paralyzed from this encounter which could have been handled differently, in the eyes of public opinion.

“I think the turmoil that’s going on nationwide in Black America is damn near a pandemic itself,” Derrick Robinson of North Philadelphia said. “It’s like a pandemic, because it’s sickening to see what’s going on in America to African Americans. More so, it’s just the communication with the police.”

“I think Blacks  have never had a good understanding with the police,” Robinson continued. “And the officers on the other side of the fence, I just think they don’t have people skills to have a good relationship with us. And because of that, I think they don’t know how to engage us and think to approach us with the worst justification when it comes to dealing with us (and that’s with deadly force in many cases). It’s been proven with Rodney King and up to this present moment.”

We visited Philadelphia’s iconic Love Park to speak with Black men about  how they felt about the recent killings  and what they think about the plight of Black men in general.

The irony of Love Park’s symbolism is that it’s supposed to represent the city of Brotherly Love, but there is no love given  to men and women of color when situations of racial injustice arise.

“What’s going on today is really crazy out here,”  Darren Whitfield of Raleigh, North Carolina said. “The Black  man has really fallen to [his] knees to the white man. They’re doing everything to stop us. We’re doing everything we’re supposed to do but the white people think we’re doing things that we’re not supposed to do, but we are. We’re taking care of our business. Taking care of our families and trying to make things right for us. Other than that, it’s cool.”

“But about the killings, I think they’re very wrong and something’s got to give. We have to get it together,” he said.

NBA coach Doc Rivers of the Los Angeles Clippers asked during an emotional interview about what he sees about the America he lives in, “Why do we keep loving this country (America), but this country doesn’t love us back?”

Finally, NBA players realized how much power that they have to peacefully protest and shut down professional sports with the support of the WNBA, Major League Baseball, Major League Soccer, the NHL and soon, the NFL.

Some people say that the protests are good, but when will this country admit to its own human rights violations and create visible changes that heal the nation and not divide it  as we have seen during the Trump administration? “It hurts when you look at the whole situation,” A. Mack from Fayetteville, North Carolina said. “Love will go a long way if you use it right. I was raised in the country and everybody really had love for everybody.”

Mack sees recent events as evidence of something that has been building slowly for decades.

“This just didn’t start,” Mack said. “This [existed] 40 to 50 years ago when I was coming through here. They’re just coming out of the wood works now and they’re getting bold because of the president we have that’s backing them to do this.”