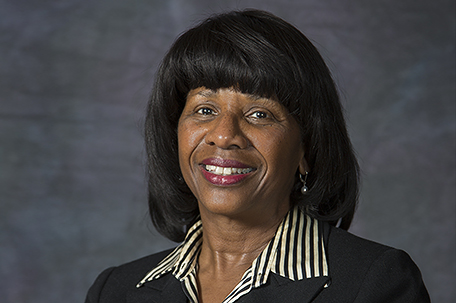 When Paulette Brown was a young girl, growing up in Baltimore, she’d visit her cousins in West Philadelphia, carrying a lunch because restaurants weren’t an option for the two hour trip.

“I cannot help but think about traveling to the South, with our food in a shoe box, fried chicken and coconut cake, because we could not stop along the way,” she said.

But as she stood before the audience assembled at the  National Bar Association-Women Lawyer’s Division’s Leadership Reception, Brown was in Philadelphia as someone else: the first African American woman to serve as president of the American Bar Association.

“When I first started out as a lawyer, it never occurred to me that I would one day be President-Elect of the 400,000 member American Bar Association and the first woman of color to head the Association,” she said.  “Here I am today, realizing dreams I did not know to dream.

Brown was sworn in as president of the ABA in August and will be the first African American woman to lead the organization. She is a partner in the law firm of Edwards Wildman Palmer in New Jersey specializing in labor and employment law and commercial litigation. She was the founder of the Association of Black Women Lawyers in New Jersey and was the first person of color to receive the New Jersey State Bar Association’s young lawyer of the Year Award and the Association’s Medal of Honor.

Brown was happy to be back in Philadelphia and said she is humbled by her new responsibilities leading the ABA.

“What an honor and privilege it is for me to be the one chosen to help guide the American Bar Association,” she said. “In doing so, I know that I also have unique responsibilities. Whenever one is the ‘First’ anything, the expectations are a bit different. I am going to do my best to live up to these heightened expectations because the members of the ABA deserve it and importantly, those who would see me as a role model deserve it.”

And being a role model is something she takes seriously, Brown said.

“I know I stand on the shoulders of giants and unsung heroes and I did not get here on my own.,” she said. “This accomplishment, while it may be novel is not entirely my own. I have walked on a road that was already paved and illuminated by those who have sacrificed so much so that I may be here today.”

Brown’s term as President of the American Bar Association begins in 2015.