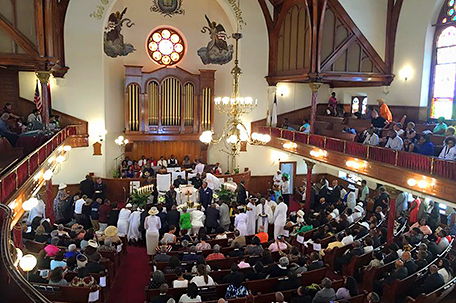 ABOVE PHOTO: Mother Bethel AME Church hosts one of the services offered this week during their 50th Quadrennial Session General Conference.

The First Episcopal District of the African Methodist Episcopal Church (AME Church) will host the 50th Quadrennial Session of the General Conference July 6 – 13, at the Pennsylvania Convention Center.  The celebration theme, “An Extraordinary History, An Incredible Future,” encapsulates the remarkable journey of the denomination from past to present and communicates hope for an even greater future based on a foundation constructed by leaders resolute in creating social change.  An estimated 30,000 participants will attend the conference with an economic impact of more than $20 million. The AME Church was founded in Philadelphia by Richard Allen and incorporated in 1816.  Located at 6th & Lombard Sts., Mother Bethel AME Church is the cornerstone of the nation’s oldest African American denomination. In preparation for the General Conference, Bicentennial Celebration events continued July 3 – 5, at locations throughout the city. 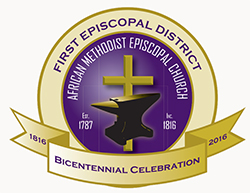 The AME Church encompasses 20 districts, spanning 39 countries.  The General Conference allows members to discuss and enact policy changes and programmatic issues, and to elect bishops and general officers. Health is a key area of concentration and The Health Commission will be having Lunch and Learn sessions July 6-9 and July 11-13 on a variety of topics including Sickle Cell, Kidney Disease/Transplant, Solar Energy and Health, End of Life and Healthy Eating and Living.  Other initiatives include a Climate Change Resolution and video that will be presented to the General Conference for consideration. Additionally, The AME Connectional Lay Organization in partnership with AME Social Action Commission and other components of the AME Church will be dealing with political justice issues along with a targeted focus on voter information and participation. Another highly anticipated highlight will be a special honor for Jarena Lee who in 1819, in an age when women were prohibited by social and religious custom from preaching, became the first woman to be authorized to preach by Richard Allen. Lee will be posthumously named a Bishop during the conference.

“We are honored to host the 50th Quadrennial Session of the General conference in the city that has served as the birthplace of both our nation and our beloved church”, stated Bishop Ingram, Presiding Prelate, First Episcopal District, AME Church.  “As we continue to impact the world through ministry, advocacy, education, activism, public service and outreach, we are especially proud to honor our visionary founder Richard Allen with a mural at our First District Headquarters at 3801 Market Street as well as a statue at the historic Mother Bethel AME Church.”

The AME Church grew out of the Free African Society (FAS) which Richard Allen, Absalom Jones, and others established in Philadelphia in 1787. When officials at St. George’s Methodist Episcopal Church pulled blacks off their knees while praying, FAS members discovered just how far American Methodists would go to enforce racial discrimination against African Americans.

As a protest against racial discrimination and slavery, these courageous members of St. George’s devised plans to transform their mutual aid society into an African congregation. Although most wanted to affiliate with the Protestant Episcopal Church, Allen led a small group who resolved to remain Methodists. In 1794, Bethel AME was dedicated with Allen as pastor. To establish Bethel’s independence from interfering white Methodists, Allen, formerly enslaved in Delaware, successfully sued in the Pennsylvania courts in 1807 and 1815 for the right of his congregation to exist as an independent institution. Because black Methodists in other middle Atlantic communities encountered racism and desired religious autonomy, Allen called them to meet in Philadelphia in April of 1816 for the First General Conference and incorporated a new Wesleyan denomination, the AME Church. A significant distinction in the formation of the Church is the basis of its creation born of sociological rather than theological differences.

For more information about AME Church Bicentennial Celebration events and the General Conference, please contact Yvonne Drayton at 215.882.3765 or Lisa Duhart-Collins at 215.280.2557.  Information may also be obtained at www.2016generalconference.org, and follow on Twitter at #IamAME, [email protected], and Facebook at FirstDistrictAMEC. Press credentials will be provided onsite beginning Wednesday, June 6, at the Pennsylvania Convention Center, Room 308. 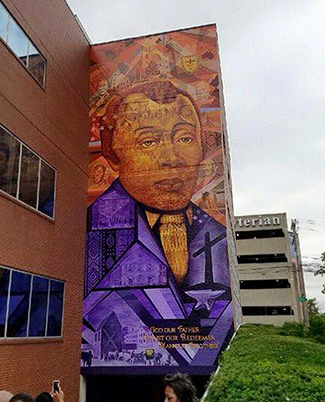 When laudatory praises are bestowed upon a historic figure, we generally know why that person is being celebrated, but we don’t always know the depth of who they are or the events and achievements that propelled them to historic note. Many of us know that Bishop Richard Allen is credited with founding the African Methodist Episcopal Church in America, and we even know about some of the trials and tribulations he faced. As the church celebrates its bicentennial and, it seems like an appropriate time to taka a closer look at the man behind the movement. This is what is known about his historic journey.

• Richard Allen was born a slave on February 14, 1760 in Germantown, Pennsylvania.

• Knowing the value of education Richard Allen taught himself to read and write.

• Allen was qualified as a preacher in 1784, at the first conference of the Methodist Church in North America, in Baltimore, Maryland. He also was allowed to lead 5:00 a.m. services.

• Allen and Absalom Jones, also a Methodist preacher, resented the white congregants’ forcing them to a segregated section for worship and prayer. They decided to leave St. George’s Methodist Episcopal Church to create independent worship for African Americans. This move met with some opposition from the white church and the more established blacks of the Philadelphia community.

• They formed the Free African Society (FAS), a non-denominational mutual aid society, which assisted fugitive slaves and new migrants to the city.

• In 1787, Allen and Jones led the black members out of St. George’s Methodist Church and established the A.M.E. Church in Philadelphia, Pennsylvania in 1787.

• Allen along with Absalom Jones, William Gray and William Wilcher found an available lot on Sixth Street near Lombard Street. Allen negotiated a purchase price and secured ownership of this lot in 1787 to build a church. It took some years before a church building was completed.

• Allen and his supporters fully intended to practice their faith under the aegis of the Methodist Church. Allen, calling the congregation the African Methodist Episcopal Church (AME), held services in a converted blacksmith shop, which was later moved to the site on Sixth Street. The doors of Bethel AME Church opened on July 29, 1794, and were affiliated with the larger Methodist Episcopal Church. Initially the congregation had to rely on visiting white ministers.

• This site is now the home of Mother Bethel African Methodist Episcopal Church. It also is the oldest tract of real estate in the United States owned continuously by African-Americans.

• In 1794, Bethel AME was dedicated with Allen as pastor.

• In 1799, Allen became the first black Methodist minister ordained by Bishop Francis Asbury, in recognition of his leadership and preaching. He and the congregation still had to continue to negotiate white oversight and deal with white elders of the denomination.

• Allen met and married Sarah Bass in 1801. They had six children.

• To establish Mother Bethel’s independence from intrusive white Methodists, Allen, a former Delaware slave, took his case to the Pennsylvania courts in 1807 and 1815 where he sued and successfully won the right for his congregation to exist as an independent institution.

• In 1816, Allen united four African-American congregations of the Methodist Church in Philadelphia, Salem, New Jersey; Delaware, and Maryland. Together they formed the independent denomination of the African Methodist Episcopal Church (AME), the first completely independent black denomination in the United States.

• On April 10, 1816, Allen was elected its first bishop. The African Methodist Episcopal Church is the oldest and largest recognized black institution in America.