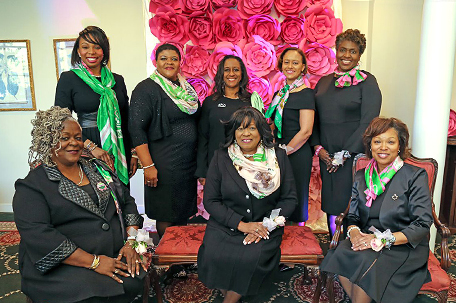 The Philadelphia Metropolitan Area chapters of Alpha Kappa Alpha Sorority, Inc. recently celebrated the sorority’s 110th anniversary with a Founders’ Day celebration at Presidential Caterers in East Norriton, PA.  One of the nation’s oldest Historically Black Colleges and Universities (HBCU), Lincoln University (PA), was spotlighted – the Mistress of Ceremonies of the event was the newly installed 14th President Dr. Brenda A. Allen, an esteemed member of the sisterhood of Alpha Kappa Alpha Sorority, Inc.® and the chapters made a donation in the amount of $3,000 to the university to support its programs.

The North Atlantic Regional Director of the sorority, Meredith L. Henderson, led the rededication ceremony at the event.

Chapter Presidents with the regional director presenting a check to the President of Lincoln University.

Educational Enrichment is a target service program of Alpha Kappa Alpha Sorority Inc.® and supporting HBCUs is a nationwide priority. Alpha Kappa Alpha’s “Think HBCU” campaign highlights HBCU’s and their contribution to the sorority and society through education, engagement, and advocacy for students nationwide.

Driven by its dedication to service and sisterhood, the sorority has evolved into a global organization with more than 290,000 members with 1000 + chapters nationally and internationally in the United States, Canada, Caribbean, US Virgin Islands, Liberia, South Africa, Germany, Korea, Dubai, and Japan.

Our programs and services are driven by our dedication to service, sisterhood and scholarship and fulfill our timeless motto of “Service to all Mankind.”