All Hail Purple Queen: From independent to mainstream on her own terms 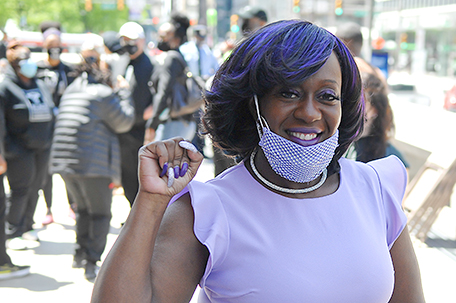 In a span of a decade, Purple went from creating and hosting her own independent internet news station (which is still broadcasting) to becoming a NICE partner with WHYY (News and Information Community Exchange), a mainstream news outlet. She has now been immortalized on a new mural unveiled across from City Hall for the impact of her voting mobilizing efforts in 2020 along with other trailblazing women for their community work.

She is the first Black woman to own an internet radio station in Philadelphia.

While the relevancy of many journalists and broadcasters relies on the fact that they are employed by major media outlets, Purple is an entity all her own that has impact.

In all honesty, Purple doesn’t need the press because she is the press. Any news, issues or problems, Purple can take it directly to the community — no middle man or woman needed.

In 2013, she founded PQRadio1.com, an internet radio station that would eventually change the Philadelphia media landscape.

“It’s an independent platform for the people and by the people,” said Purple.

Purple, who goes by the name of Purple Queen, describes herself as an “actionist.” Her impact is grounded in her community work.

Her fascination with the color purple began when she was 12-years-old.

She is a staunch advocate for voting, mobilizing residents in her West Philadelphia community and beyond to vote. She does this side by side with her husband, Thomas Blackwell VI.

“We’ve registered thousands,” said Purple, who has lost count at this point of how many she and her husband have registered to vote with their “Love, Vibe, Vote” campaign.

“I will always use my platform for positivity,” said Purple.

Purple was honored on May 11 with a mural featuring seven prominent Philadelphia activists including Dr. Ala Stanford, founder of the Black Doctors COVID-19 Consortium and MOVE members Pam and Ramona Africa. The mural, located on the Municipal Services Building across from City Hall, pays tribute to Black women activists who have been instrumental in fighting systematic racism, registering voters in 2020, promoting public health through the pandemic and working to create a safer and more just Philadelphia.

“All of the wonderful women on there who are active in their activism, throughout this year and from many years — to be aligned with them is such a true honor and to be acknowledged for the work that I’ve done through our Love, Vibe, Vote campaign is amazing.”

Purple’s impact expands to City Hall, where she has direct access to Philadelphia Mayor Jim Kenney, who is a frequent guest on her PQRadio1.com station.

Kenney often grants Purple direct interview access, whether it be at her internet station, on the street or at City Hall. Purple credits her relationships with the mayor and other politicians to her interview style of asking straight forward questions without being disrespectful.

For those who may question her ability to hold local politicians accountable due to her rapport with them, Purple says to look through her interview archive.

As an example, she notes that she has repeatedly asked Kenney why he reneged on his campaign promise to end the controversial stop-and-frisk police policy

Although she is the granddaughter-in-law of former Philadelphia councilwoman Jannie Blackwell, and her husband is part of the Blackwell family, a political dynasty which lasted over 45 years, Purple has paved her own way.

“I was known as Purple Queen before I became a Blackwell.”

Prior to founding PQRadio1.com, she worked in entertainment with a team that first broke Philadelphia rapper Meek Mill’s music. She also managed rap duo Young Gunz, which consists of Young Chris and Neef Buck from Philadelphia. Their hits include the song “Better Love,” and “Can’t Stop Won’t Stop.”

Johnson went on a 26-day hunger strike for the mayor to acknowledge a City Council resolution that would declare gun violence a city wide emergency.

Queen brought Mayor Kenney to speak with Johnson. Johnson ended his hunger strike after the Mayor agreed to work on fulfilling the resolution.

On the election front, Purple is endorsing Terri Booker for Court of Common Pleas judge.

Pertaining to Krasner’s opponent, she said, “If you are oppressing, my people, and anyone is supporting you, such as the FOP oppressing Black and brown people and they support you, then I can never support you.”

During the Walter Wallace Jr. protests, Purple’s husband Thomas Blackwell VI was brutalized by the police in West Philadelphia while on Facebook Live.

He was following police instructions to get off of 52nd Street.

“He [Blackwell] told him that he could not get down the block. Seconds later, he was bum rushed by 25 to 30, different police officers,” she said.

Purple says her husband is still healing from his injuries.

Our conversation transitions back to media.

I am a dark skinned chick wearing purple. People would laugh at me, they never took me seriously,” said Purple recalling the struggles of getting her foot in the door of mainstream media.

“Now, God has blessed me that I’ve been the breaking news, time and time again.”

When asking Purple if she has political aspirations, she responded, “I’ll let God order our steps.”

SUN Correction: In the print edition of The SUN we incorrectly stated that Saj Purple Blackwell is a WHYY television host. Mrs. Blackwell is a NICE partner with WHYY (News and Information Community Exchange). We apologize for the error.

All Hail The Queen?