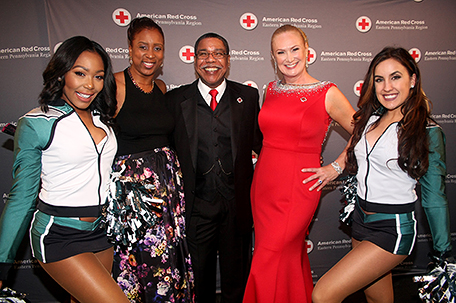 The American Red Cross of Eastern Pennsylvania hosted its 18th Annual Red Ball on March 24 at the Tork Club of Lincoln Financial Field. The black-tie, charity gala raises funds specifically for the Red Cross House. The Red Cross House is a one-of-a-kind center for disaster recovery in Philadelphia that provides housing and ongoing support to help local victims of home fires and other unforeseen disasters that gives victims an opportunity to regroup, renew, and begin again.   Independence Blue Cross, and AmeriHealth Caritas, presented the premiere event.

I spoke with Angela A. Broome Powley, who has served as interim CEO for the Red Cross’s Eastern Pennsylvania Region for the past six months. The Eastern Region serves nearly 3 million people in Philadelphia, Delaware and Montgomery Counties. Powley shared that she had never been to Philadelphia before her new assignment and found people to be, “wonderful and welcoming and volunteers and staff amazing.”

In her new role, she has spent a great deal of time learning about the city and traveling throughout the eastern region.  This was the first red ball she has attended in Philadelphia.

“I have been to several balls, but nothing like this,” she said. “Most are sit down dinners in ballrooms. This is the biggest thing I’ve ever seen. Here we are in the home of the World Champion Eagles with 1,200 guests! This is the party to end all parties.”

Everyone pulled out the fashion stops..While the ladies were beautifully dressed in stylish gowns, the men made their fashion statements as well. The overwhelming palette was red. There was a fabulous VIP lounge, dancing, live entertainment, including two bands, (CTO Artists), a silent auction, cigar and whiskey bar, beer garden, games, photo booth and much more.

It was a feast for the eyes as well as the palate. The food stations were phenomenal and featured more than two dozen of the region’s finest restaurants, caterers and spirits.  Guests enjoyed samples of delicious hors d’oeuvres, desserts, seafood, and carving station morsels.

It was a great time to be “All Around the Philly Social Scene!”

About the American Red Cross:

The American Red Cross shelters, feeds and provides emotional support to victims of disasters, supplies about 40 percent of the nation’s blood, teaches skills that save lives, provides international humanitarian aid, and supports military members and their families. The Red Cross is a not-for-profit organization that depends on volunteers and the generosity of the American public to perform its mission. For more information, please visit redcross.org or visit them on Twitter at @RedCross.