All about… PROJECT SONGBIRD! 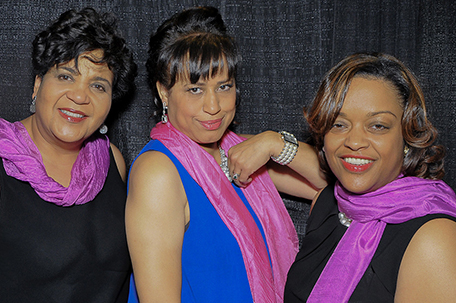 Project Songbird features the vocal talents of Romona Riscoe Benson, Sharon Powell and Mellanie Lassiter. It is the musical fusing of busy women who are, much like the Sankofa symbol, reclaiming their love of music by performing songs of meaning and connectivity. Songbirds is an initiative that highlights sister-friends, known and regarded in the Philadelphia region. Under the direction of Henri McMillian, they enjoy a desire for good melodies, along with their commitment to community engagement.

Lassiter was raised in church. Gospel is the genre closest to her heart, having performed with the Grammy-nominated Wilmington Chester Mass Choir for several years.

She loves the power of words and uses her vocal abilities to inspire others. Lassiter also seeks to empower and uplift by encouraging people to be the best version of them. She continues to explore new vocal capabilities and is drawn to classic R&B and contemporary jazz.

Powell enjoys all genres of music, especially vintage jazz standards and “doo-wop” oldies. She attributes her soprano voice to her late father Ernest Powell, a local “doo-wop” recording artist in the late 1950s. She’s performed with local bands at many nightclubs throughout the region including the legendary Jewels Nightclub on North Broad St. Sharon previously used her songwriting skills to produce jingles for radio stations and local organizations.

Riscoe Benson began her musical journey listening to her mother’s collection of leading jazz artists of the time. She began her jazz journey under the direction of Nathan Davis, singing with the University of Pittsburgh Jazz Ensemble. She has played with acclaimed musicians including Geri Allen and the legendary Kenny Clarke.

Her performances have been in venues in Pittsburgh and Philadelphia, including the beloved Zanzibar Blue and, now, South Jazz Cafe. She values her passion for singing as a vehicle to tell stories for her audiences.

McMillian has recorded and performed as a contractor or musician with such musical legends as Boyz II Men, Patti Labelle, Gladys Knight, Aretha Franklin, Teddy Pendergrass, The Temptations, James Brown, The O’Jays, Stylistics and many others. He was also the musical director for Harold Melvin and the Blue Notes for several years.