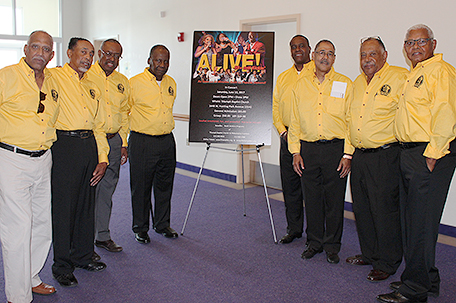 ABOVE PHOTO:  Members of the Philadelphia Frontiers organization, who along with Triumph Baptist Church, presented scholarship money and raised money for youth programming from the performance.  (Photo: Leona Dixon)

Imagine a chance to explore long held passions and dreams later in life, in a setting where age is not only a number, but an opportunity…for fulfilling dreams, and for second chances.

ALIVE 55+ and Kicking—a musical production from the Harlem-based Mama Foundation featuring performers over the age of 55 — recently brought their show to Triumph Baptist Church in Philadelphia’s Nicetown section. Proceeds from the show benefitted both the church and the Philadelphia Frontiers organization for their respective youth programming.

Founded in 1969, Triumph Baptist Church has become a fixture of the community. The church sponsors many youth activities which will benefit from the funds raised, such as recreation and scouting programs. In fact, one of their very first ministries was a day care center.

The Philadelphia Frontiers International club, founded in 1936, although diminished in size, is a vital organization which continues to make an impact in the local African-American community.

Set to the soundtrack of their lives, each performer offers a brief vignette detailing the various trials and triumphs that brought them to where they are today. Energetic, hopeful, and poignant all at the same time, these stories resonated with the enthusiastic audience, which was largely comprised of their peers –  African-American baby boomers.

It gave those present food for thought, touching on the familiar experiences that are part of the aging process such as caregiving and watching as adult children set out on their own. It also covered topics like divorce, alcoholism, spiritual renewal, and forgiveness – especially forgiveness of oneself for past missteps.

The show was written and produced by award winning Broadway producer and veteran New York radio personality Vy Higginsen with her husband Ken Wydro, who is the show’s director. She is best known as co-creator of the award-winning musical, “Mama, I Want to Sing,” which is based on the real-life story of her sister, singer Doris Troy.

She is thrilled about “Alive 55+ and Kicking, and its success.

“There tends to be limitations and lockouts from big venues and having the kind of spaces that would display our talent. But we won’t be stopped. We will play wherever God sends us – big or small – because we understand that this music is our history. This show [Alive 55+ and Kicking] is not just a show. It’s something that goes deep inside your spirit, and gives total recognition of who we are, and is a reflection of ourselves, our family members or somebody we know. It is a beacon of hope.

“Everybody that we serve would not get an opportunity downtown in a union house or union production,” Ken Wydro said. “But the talent is there, and the stories are real. So, we are able to provide a platform for people who wouldn’t be invited to audition and compete downtown. The production is of high quality, [and] has an emotional impact. A lot of the time, you go to Broadway, and you don’t feel anything. It is a chance to emotionally and spiritually express yourself, right in Harlem.” 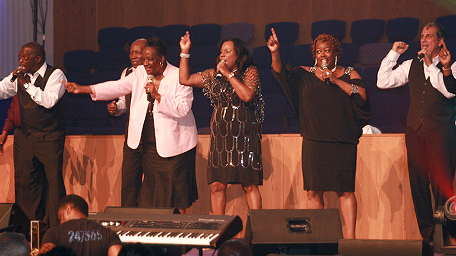 The cast of “Alive! 55+ and Kicking” bring the audience to their feet during their Philadelphia debut on Saturday, June 10th at the Triumph Baptist Church in Nicetown. (Photo: Leona Dixon)

The Mama Foundation and Its Programs

The Mama Foundation was founded by Higginsen in 1998 on the heels of the international success of “Mama, I Want to Sing”. She was anxious to transform its influence into something permanent in Harlem, dedicated to the neighborhood’s glorious cultural past and the importance of maintaining the creative arts as the fulcrum of its continued relevance.

According to its official website, The Mama Foundation has established a cultural space in Harlem where youth and adults have access to quality training and employment as performing artists. In 2006, Higgensen founded Gospel for Teens, a free educational program that offers a substitute for the arts programs removed from many inner-city schools.

“My family has lived on the same block in Harlem for almost 100 years. So, my sense of history, legacy, music and food – what Harlem really means – is cemented in my brain from childhood,” Higginsen explained. “Our purpose at The Mama Foundation is to present, preserve and promote the history and culture of African-American music. We want to be the “Mecca” for great music, and make people from all over the world remember just what Harlem represented.”

With gentrification taking hold to in the community, The Mama Foundation for the Arts is more important than ever.

“Being in the heart of Harlem, which is changing a lot, you need something that grounds you in the traditions, styles and culture of it, “ Wydro stated. “What The Mama Foundation becomes a focal point that people can come back to. We need to understand and see what Harlem used to be, and [what is] continuing into the future.”

“I don’t want the original contribution of gospel, jazz and R&B to be wiped out by the contemporary music and sound,” Higginsen continued. “I don’t want the new instrument to forget about the old instrument. There will be creation of new music, but this music must remain on the menu. I’m not putting down any other kind of music as we move from R&B, soul and disco to rap and hip-hop. {I’m just saying] don’t annihilate what went on before you; appreciate.”

For more information on The Mama Foundation, visit: mamafoundation.org. For information about the Philadelphia Frontiers International and Triumph Baptist Church, visit: phillyfrontiers.org and www.triumphbc.org.