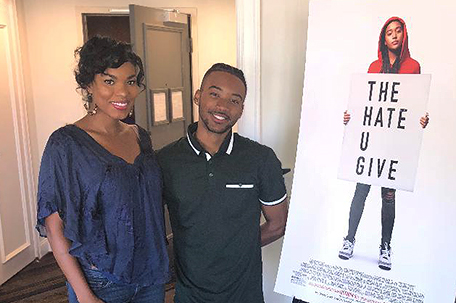 ABOVE PHOTO:  ‘The Hate U Give’ star Algee Smith with SUN writer Kharisma McIlwaine.

Films can be a place to go for pure entertainment and an escape from reality. Films can also serve as a microscopic lens pointed at our current state of reality. The film, “The Hate U Give”, serves as the latter.

The screenplay by Tina Mabry and Audrey Wells, is based on Angie Thomas’ novel of the same name. “The Hate U Give” tells the story of Starr Carter. Starr Carter (Amandla Stenberg) is a young Black teenage girl, who lives in a predominantly Black area, but attends a predominantly White school. She struggles to find balance in both worlds, where it’s difficult to be authentically herself. After Starr witnesses the murder of her best friend Khalil (Algee Smith) at the hands of a white police officer, her world quickly unravels.

Under the direction of George Tillman Jr., “The Hate U Give” has a star-studded cast which includes; Amandla Stenberg (Starr Carter), Algee Smith (Khalil), Regina Hall (Lisa Carter), Russell Hornsby (Maverick Carter), Issa Rae (April Ofrah), KJ Apa (Chris), Lamar Johnson (Seven Carter), Common (Uncle Carlos), Anthony Mackie (King) and Sabrina Carpenter (Hailey).  The SUN spoke with Algee Smith about his role as Khalil, the significance of this film, and his perspective on being a young black man in America.

One of the most powerful scenes in “The Hate U Give” is when Maverick, sits his children down to have “the talk.” For anyone not familiar with this terminology, “the talk” is the conversation that Black parents have with their children outlining what they should do in the event that they are stopped or pulled over by the police. Unfortunately, almost every Black person has either had or were given “the talk” at some point in their life. Algee Smith shared a personal account of his experience.

“For me that came pretty late. My parents definitely sat me down and had that talk, though,” Smith said. “I didn’t grow up in the worst neighborhood, but I didn’t grow up in the best neighborhood. It was kind of a middle ground, so there was never really a major concern until I got to the point where I started going out and doing things on my own. Then they sat me down and were like,  ‘look, when you get out here, don’t do this… if you get encountered with this, make sure you remember this.’

“I had that talk when I was about 13 or 14,” Smith continued. “I think a lot of times just being young, you don’t think about it… you’re just like ‘I’m out here.’ But when you really realize the magnitude of it, then you do think about it. You make sure you don’t do certain things, because at that point it’s not about being cool, because when you’re gone there ain’t no more cool.”

In the film, Smith’s character Khalil is influenced heavily by the words and mantras of Tupac. Even the title of the film —“The Hate U Give” — pays homage to Tupac’s philosophy on what hate does to the next generation.

“That just shows you how ahead of his time Tupac was,” Smith said. “It’s crazy because it makes so much sense and it doesn’t take a genius to see it. If you’re a kid, and I’m your father, and every day I’m instilling something in you whether that’s faith, whether that’s fear, you’re going to grow up and you’re going to act upon what I’ve instilled in you.”

“When you’re living in a place where a lot of these young Black men don’t even have fathers in the house or mothers, they grow up with what society is giving as far as what’s in the music and what’s on television,” he continued. “You’re going to act how society has brought you up to it. So, in a sense, you can’t really blame me for acting like this. At the same time… as a young Black man, you have to know what America is.”

Tupac also spoke openly about the corruption of our current justice system as it pertains to Black men specifically. Smith echoed a lot of the late great artist’s sentiments and shared a bit of his preparation for the role.

“To be honest, it wasn’t hard to put myself in that mindset because that’s a reality for me and a lot of my homies,” he said. “At any given moment, being a young Black man, we could be out here dead by the hands of a police officer, by the hands of the justice system, or thrown in jail by the hands of the justice system quickly. Just like Khalil was saying in the movie, it’s like a conveyor belt. They’re just waiting to throw you on the belt and it’s crazy! For me unfortunately I didn’t have to do a lot of digging or searching to find where I needed to be for that.”

“I think the preparation for me was just listening to a lot of Tupac and putting myself in Khalil’s head,” Smith continued. “I’m already a Tupac fan, but just putting myself where he would’ve been and living there… not trying to do it, just being and whatever came out just came out.”

One of the concepts that “The Hate U Give” enforces throughout the film is that the rules for Black people in America are very different. No, it’s not fair, no it shouldn’t be that way, but acknowledging the reality of how things work vs. how we want them to be, may literally be the difference between life and death. “The Hate U Give” is successful in showing the biases that exists across the board… including those present in our own community.

“There’s always a different side to every story,” Smith said. “I appreciated the fact that the film showed another perspective. A lot of officers are in fear their own lives. The moment that they pull you over, the moment that they step out of the car… they don’t know what’s about to happen whether the person is Black or White. Unfortunately, if you’re Black, it’s just a bigger fear,”.

“At the end of the day, the system that police are still run by is messed up, because they’re not going to shoot a White man like they’re going to shoot a Black guy, even if it’s a Black cop. It starts with the system. Everything is rooted in that system,” Smith continued. “After slavery, when they freed us, it was just another form of slavery… throwing us in jail, and that’s the biggest business in the world. At the end of the day the system is still corrupt.”

With the number of videos available to the public showing civilians being murdered at the hands of police officers, everyone has an opinion. The discussion surrounding those deaths often lead back to “the talk.” What should one do if they are in a situation where they are pulled over? Smith offered his perspective on the topic.

“Some of these videos that we see when people are talking back to the cops… It’s kind of hard to tell someone not to do that. It’s kind of hard to tell someone, don’t feel what you’re feeling in that moment or just hush your mouth,” he said. “But in the same instance, it’s almost life or death, so do what you have to do to get out of that situation. Whether that’s being quiet, closing your mouth, putting your hands on the dashboard, or complying with the officer and whatever he wants you to do, unless it just gets to a complete point of disrespect. But for the most part, just make it home. Do whatever you have to do to make it home. “

Unfortunately, even when Black men and women comply and do everything that is asked of them, there is still no assurance that they will in fact make it home alive. That fact and many others that are brought to light are some of the reasons why films like “The Hate U Give” are so important. It is crucial at this time, given the current climate of our country and the heightened emboldened flood of racist rhetoric, to keep an honest conversation going.

“The Hate U Give” opens in theaters nationwide on Friday, October 5th. Check your local listings for showtimes. This film is an absolute must see!