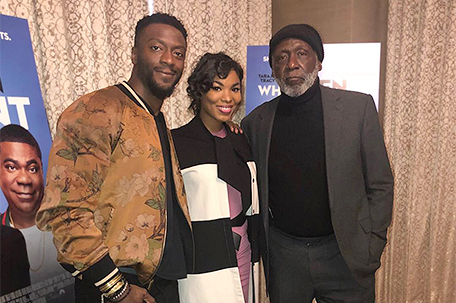 Inspired by the romantic comedy “What Women Want”, “What Men Want” tells the story of a female sports agent named Ali Davis, played by Taraji P. Henson. Ali, who is frequently rejected by her male counterparts, can’t seem to advance in her career or get the promotion she deserves despite her many talents. After an encounter with a peculiar psychic (played by Erykah Badu), Ali develops the ability to hear men’s thoughts. Directed by Adam Shankman and produced by Will Packer, the all-star cast of “What Men Want” includes Taraji P. Henson, Aldis Hodge, Richard Roundtree, Traci Morgan, Tamala Jones and Erykah Badu. Leading actors Hodge and Roundtree visited Philadelphia for a round table discussion about their roles in the film.

In “What Men Want,” Hodge plays Ali’s love interest Will. In little to no time, Ali takes his life by storm. Hodge spoke about Ali and Will’s dynamic and playing opposite Taraji P. Henson.

“They had a connection. It was serendipitous, because it turned into something real later. I feel like where they met each other, at that point in their lives” Hodge said, “they encountered something they weren’t expecting. They were both at points that demanded growth, and they were the ones to help each other grow. I like the lesson in their profound discovery of one another.  How something that seemed fleeting, ended up being something so pivotal in their individual growth as human beings. When it came to playing off of a character like Ali on screen, we had to challenge each other to see how far we could go. On screen, we were trying to pull the best out of each other. Working with Taraji personally was just awesome, because she’s dope!”

In addition to the romantic chemistry and comedic elements in the film, “What Men Want” is a story that also highlights the many facets of fatherhood. Will is a doting single father to his son Ben, while Skip, played by legendary veteran actor Richard Roundtree, is the backbone and sounding board for his daughter Ali.

“Having grown up without a father, for me, it was quite a privileged experience playing a father, because I got to represent my idea of what a present father was,” Hodge stated. “Not speaking ill of my pop, we have a great relationship now. But to be a single father, I got to play the fantasy of what I think I will be as a father. To couple that with meeting Ali’s father Skip… we kind of had a similar pathway. We were able to have that scene where we had a moment to validate that. You have two men being very vulnerable with one another and themselves. As men that’s not something that’s necessarily celebrated or supported widely.”

“What Men Want” also offers an example of a woman unwilling to compromise her moral fiber to get ahead in her career, a lesson Hodge hopes young women will take notice of in the film.

“The highest value of this film was the moral concept of self-value and self-worth.” he said. “When I read the script I loved the character because he’s a father, but then I love Ali’s character because she has this journey of finding her own self-worth. That for women is so powerful and so necessary, especially little Black and Brown girls still dealing with these sordid images. Let’s just be honest, we’re in a world of social media. There’s actually nothing wrong with those platforms, but sometimes the loudest people using those platforms are putting out some tough representations. How do we combat that and show a positive side of a woman trying to come up in the world using her brain? How do we show a positive side of a woman showing how smart and valuable she is… a woman getting what she needs without submitting or settling for less? I feel like this film answers some of those questions.”

When asked about scenes that stood out most both during and after the process, Roundtree offered insight on some of his favorite scenes in the film.

“For me there were two scenes… the two scenes with my daughter. Number one, the boxing ring, and when Will reveals who he is at the barbecue. Those were magic for me. Your honesty was so matter of fact — that’s what struck me” Roundtree said to Hodge.

Hodge also spoke about the barbecue scene and his connection with Skip with a sense of reverence, adding that two of his other favorite scenes were, “when Ali goes to see the psychic… and this may sound crazy, but the first scene where you see Will and Ali, rolling around in the bed. Honestly, because I’m impressed with how good it came out. I was so nervous about that scene… I’m not even going to lie,” he said with a laugh.

With the Golden Globes only a few weeks behind us and the Oscars quickly approaching, the conversation took a turn to the concept of the increased representation of people of color in film and television, in front of and behind the camera respectively.

“I’m super-impressed with our participation in the industry today,” Roundtree said. “It can improve greatly, but the intelligence of people of color I love. It’s only expanding.”

“As far as increased representation, I’ve been through a few rounds of the Oscars now. As a current Academy member, I have a job to do when it comes to that specifically,” Hodge said. “I don’t look at it as increased representation, I look at it as increased acknowledgment. When it comes to people of color in all facets — whether it’s Black, Brown, yellow — we’ve been killing it for a long time! We just haven’t been acknowledged for it. Like Richard said, when it comes to intelligence, that is apart of our fiber and our nature… it’s culture, it’s who we are. Now with us being able to be in a position to choose, i.e. being in the Academy… we can actually change the spectrum.”

“What Men Want” opens in theaters nationwide on Friday, February 8th. Check your local listings for showtimes and support!