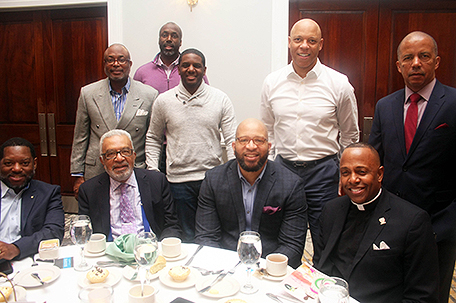 There was a sellout crowd of just over 700 members and enthusiastic supporters of the Omega Omega chapter of Alpha Kappa Alpha Sorority, Inc. (AKA) and its charitable arm, The 1926 Foundation’s 61st annual Fashion Show and Luncheon.

The lively affair took place at the Drexelbrook Catering and Special Event Center in Drexel Hill, Pennsylvania on Saturday, February 2.

“Alpha Kappa Alpha’s current international program, under the leadership of Dr. Glenda Baskin Glover, is “Exemplifying Excellence Through Sustainable Service”, said Carol Parkinson-Hall, president of Alpha Kappa Alpha Sorority, Inc., Omega Omega Chapter. “The annual luncheon fashion show has enabled us to exemplify excellence over the past six decades. Proceeds from our annual fundraiser enable us to provide financial support to agencies and organizations that align with our international program initiatives through the Annual Day of Sharing Program.”

Funds from the event will be distributed to students and nonprofits in June.

The  signature event also celebrated the 92-year history and achievements of the Omega Omega Chapter, which was chartered in Philadelphia in 1926.

The chapter remains as a thriving organization of nearly 500 members, serving communities throughout the city. The theme of this year’s luncheon was, “Embracing our Pearls with Elegance” and the experience certainly reflected the theme.

Alex Holley did another fabulous job, as she has in past years, as mistress of ceremonies. The high energy Holley is co-host of “Good Day Philadelphia” on FOX 29 and is also an active member of Alpha Kappa Alpha Sorority, Inc. The award-winning journalist made quite a few stunning wardrobe changes herself.

There was also a swag bag auction, fantastic door prizes and vendors. Everyone enjoyed themusical entertainment and a delicious lunch.