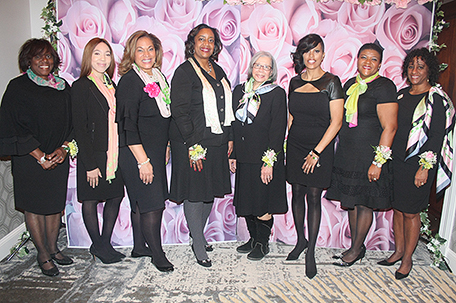 A celebration of 111 years of sisterhood and service

The “Rededication of Service and Excellence” took place at Drexelbrook Caterers in Drexelbrook, Pennsylvania.

The members were entertained by violinist Myles Bell. The gifted musician is a sophomore at Henderson High School in West Chester, Pennsylvania.  Each year, the Philadelphia metropolitan area chapters provide a spotlight for a local Historically Black College or University (HBCU), highlighting its historical importance and significant community impact.

This year’s university selection was University of Pennsylvania, which was the first HBCU when it was founded in 1837.

A donation in the amount $5,000 was presented to Elizabeth Berry Holmes, immediate past president of Cheyney University of Pennsylvania, Philadelphia Alumni Association.  A message of appreciation was shared via video from Cheyney president, Aaron A. Walton.

Congratulations to all members of Alpha Kappa Alpha Sorority, Inc. involved in this major milestone celebrating more than a century of rich history and service!