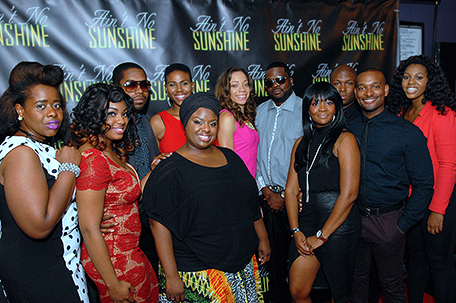 Sunday evening marked a special occasion for South Street concert venue TLA as they opened their doors to thespians for the inaugural theater performance of “Ain’t No Sunshine,” based on book of the same name by New Jersey native Tiona Pathenia Brown. 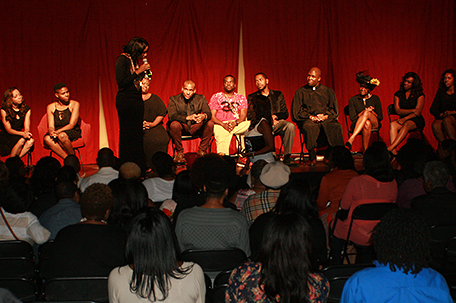 Tiona Brown thanks performers and her Mother (in white dress). (Photo by Leona Dixon)

It seemed as if TLA was slightly unprepared for such a crowd as they were slow to accommodate and security was menial at best.  Catering company Paprika Philly was on site to serve disappointing $10 platters as people filled the venue.  Once the play finally started, it kicked off with a harrowing video presentation of a young woman’s sexual trauma complete with a graphic sex scene leaving a few wishing there was something left to the imagination.

The play is based upon protagonist Sunshine Cannon (Kali Racquel) who plays a young woman battling many demons.  She is 16 and living with her drug addicted abusive boyfriend Kalil (Robert B.O. Rand) and trying to overcome her sexual abuse while under his control.  Her sister Sandra (Tasha Holmes) and husband Jermaine (Chadwick A. Rawlings) do their best to offer her support when she needs it, but they have their own crosses to bear.  Sunshine’s mother (Lauren Settles) tries to reenter her life and brother Shawn (Marc Holladay) offers some news of his own.  The play is one loaded with drama and themes of depression, multifaceted abuse, redemption, healing, and death. 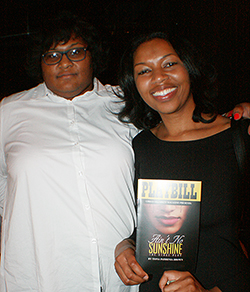 Although this was the first time the play was performed, it was well received by the audience.  A few attendees couldn’t control their laughter almost causing an altercation leading up to intermission.  While the actors may have been distracted by the haggling, the show must go on as they maintained their professionalism throughout.

Standout performances of the night were Sunshine, Kalil, Sandra with a heartbreaking monologue, Shawn just by the facial acting he was doing alone, and Dr. Patel (radio personality Tiffany Bacon) made us all want to set up a session or two with her.  The actors all had amazing abilities to cry on cue that forced us all to take note.

The shock value was on overload, to the point that it was unbelievable so much trauma could occur in one family.  Each sibling experienced some form of sexual abuse and control and there wasn’t much to be done for any of them except Sunshine.  The acting started off slow, but by the time there was true conflict the audience showered their affection.

The scene transitions took close to forever and the intermission was a whole 20 minutes for no reason at all.  In a couple of scenes the mistress of song (Lavonya Moore) performed painful renditions of “Ain’t No Sunshine” and “Precious Lord” that would make anyone beg Beyoncé to take over.  The audience had no problem showing their disapproval, hopefully making her reconsider those vocal lessons and Aunties telling her she could really sing.  The ending scenes were some of the most gripping, making the audience yell and scream as if watching a movie.  Shawn’s story was left ambiguous leaving many to speculate a sequel.  After the show there was a praise fest for the actors disguised as a Q&A session that would have been better if a therapist was actually on site to break down the play and explain each characters’ psyche.

Overall this was a play with exceptional actors, hilarious adlibbing, and room for growth.  The topics discussed were important to hear specifically for the black community as we tend to brush these issues under the rug.  The messages in this production are abundant that so many can relate to them, especially Sandra’s monologue concerning her life as a ‘sister mom’.  I recommend “Ain’t No Sunshine” to everyone and in particular those struggling with adversity or abuse as you may leave inspired to share your story or seek necessary guidance.